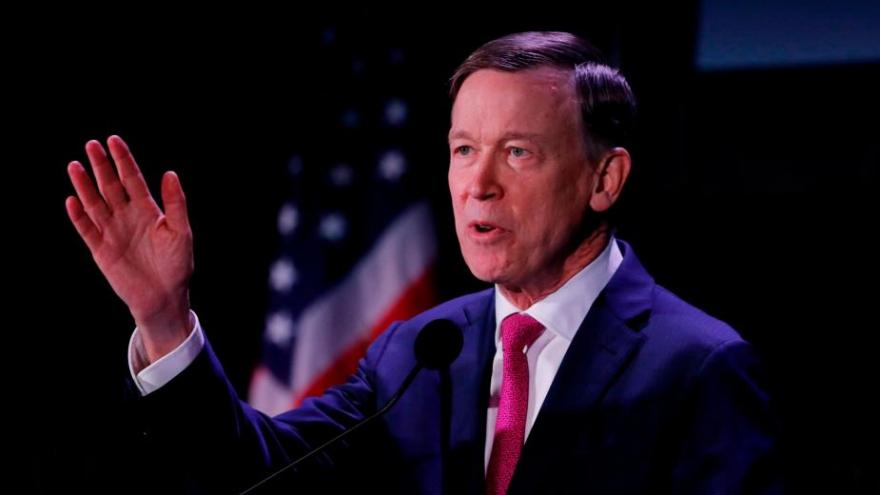 Democratic Senate candidate John Hickenlooper declined to appear at an ethics hearing about his alleged violations of a gift ban in defiance of the Colorado Independent Ethics Commission.

(CNN) -- Democratic Senate candidate John Hickenlooper declined to appear at an ethics hearing about his alleged violations of a gift ban in defiance of the Colorado Independent Ethics Commission.

The panel unanimously voted on Thursday for the Colorado Attorney General's office to enforce its subpoena. That office then filed a motion requesting that the Denver District Court order Hickenlooper to remotely testify before the commission this week.

"The Commission found Gov. Hickenlooper in contempt for his failure to appear in connection with a validly issued subpoena. The hearing has been continued until tomorrow," Dino Ioannides, executive director of the Colorado Independent Ethics Commission, said in an email Thursday.

The former governor opposed the motion and "has made clear he will testify in person," according to Melissa Miller, a spokeswoman for Hickenlooper.

"Today's debacle of a hearing has made clear that WebEx doesn't work for a legal proceeding like this," said Miller, referring to the video conferencing program.

"In order to put an end to the partisan political circus orchestrated by a dark money Republican group, Gov. Hickenlooper offered to testify, and though that was rejected, he remains ready to appear," Miller added.

The commission is considering a complaint by a conservative group claiming that Hickenlooper violated the state's gift ban by using private planes while he was governor. Hickenlooper denies the charges and has offered dates to appear in person before the commission in August.

Hickenlooper faces a June 30 Democratic primary against former Colorado House Speaker Andrew Romanoff. The winner will face Republican Sen. Cory Gardner in one of the most competitive elections of the year. In 2016, Democratic presidential nominee Hillary Clinton beat Donald Trump in the state by 5 points.

National Republicans having been using the ethics complaint to attack Hickenlooper. "Hickenlooper's blatant disregard for our legal system and his state's ethics laws make it impossible for Colorado voters to trust him with elected office again," Joanna Rodriguez, a spokeswoman for the National Republican Senatorial Committee, said in a statement Thursday.

This story has been updated with a statement from the Colorado Independent Ethics Commission and the National Republican Senatorial Committee, and additional comment from Gov. Hickenlooper.