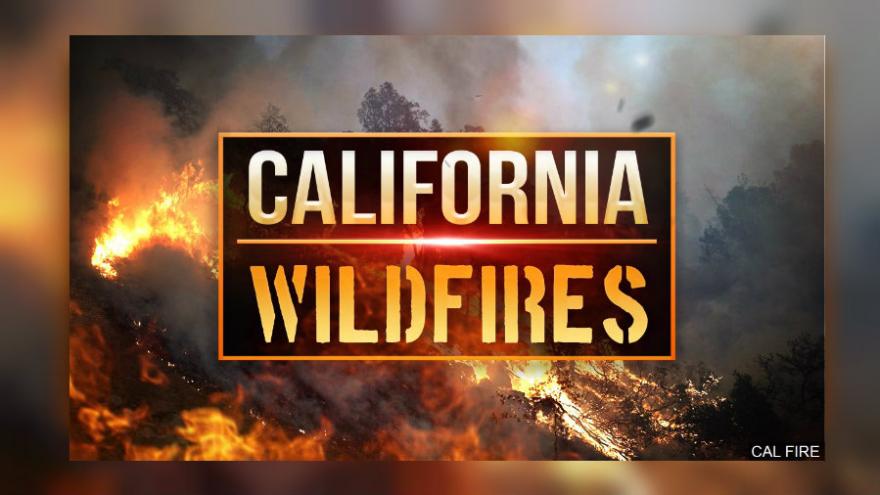 (CNN) -- Powerful winds are expected to sweep through California on Sunday, exacerbating three major fires that have ravaged the state from both ends for several days.

The Camp Fire -- the most destructive fire in state history and the third-deadliest -- has killed at least 23 people and left 110 missing in Northern California.

Saturday saw a brief reprieve in the fierce winds fueling the fires, and firefighters hoped to use the break to their advantage.

But on Sunday a Cal Fire unit chief warned that "It's not over yet."

• Camp Fire: The largest of the trio, the Camp Fire has burned 109,000 acres across Northern California and is 25% contained as of Sunday morning, according to Cal Fire. It's destroyed an estimated 6,700 buildings, most of which were homes.

• Woolsey and Hill fires: In Southern California, the Woolsey fire has spread to 83,275 acres and was 10% contained, up from 5% the night before. The smaller Hill Fire covered 4,531 acres and was 70% contained. Together, responsible for the destruction of 179 structures, but another 57,000 are threatened, according to fire officials.

• Massive evacuations: More than 300,000 people have been forced from their homes statewide. The majority of those residents are in Los Angeles County, where 170,000 were evacuated.

While firefighters made headway on containing the fires Saturday, the return of powerful winds a day later threatened that progress, particularly for the Woolsey Fire in Southern California. At least six firefighters have been injured in both blazes, according to Cal Fire.

"Sadly, with these winds, it's not over yet," Scott Jalbert, chief of Cal Fire's San Luis Obispo Unit, told reporters at a news conference. He said the gusts have officials "very concerned."

Officials previously warned gusts would peak at around 40 mph, which could affect the viability of using aircraft to combat the fires.

They also told people in mandatory evacuation zones that if they hadn't left yet, they needed to.

Ventura County Fire Chief Mark Lorenzen warned the rate by which the fire is spreading is "exponentially more" than has been seen in fires in years past.

Osby said the challenges presented by climate change are clear across California.

Authorities in the southern part of the state used to be able to rely on help from their counterparts up north around this time of the year, Osby said, when the threat of fire was much less prevalent in those communities. But that's no longer the case.

Though the state's drought has eased slightly, it's still abnormally dry, according to CNN meteorologist Taylor Ward. That leaves a lot of dry vegetation to feed fires.

Crews searching for the dead

Crews are combing through blackened ruins of homes. The number of dead more than doubled late Saturday with the news that officials discovered 14 more sets of remains. On Sunday, officials confirmed that two deaths in Malibu were related to the Woolsey Fire, bringing the death toll to 25.

Ten victims were found in or near Paradise, California, a town of about 26,000 that's been all but leveled by the Camp Fire.

The painstaking process of finding the missing and identifying the dead is challenging, with some of the bodies recovered burned beyond recognition.

"In some cases, the only remains we are able to recover are bones or bone fragments," Butte County Sheriff and Coroner Kory Honea told reporters. "I know that members of the community who are missing loved ones are anxious, and I know that the news of us recovering bodies has to be disconcerting."

Many bodies recovered from the Camp Fire were found inside or near homes or in vehicles, officials said. Authorities said they have reports of 110 people still missing in the area affected by the blaze.

Hours after the fire broke out, residents fleeing Paradise became trapped in gridlock traffic as the fire closed in. Some drivers abandoned their vehicles in the chaos and attempted to escape on foot.

Craig Clunies-Ross and his wife had seen wildfires before and they were prepared when it was time to evacuate their Malibu home. But what they saw when they stepped outside shocked them.

"It was a 100-foot wall of flames. It was like a firestorm, it was roaring," he told CNN affiliate KABC, referring to the Woolsey Fire.

The family quickly took photos, a few clothes and other essentials hoping they could come back to their home. On Saturday, they were among several families who drove through scorched hills and discovered their homes were leveled.