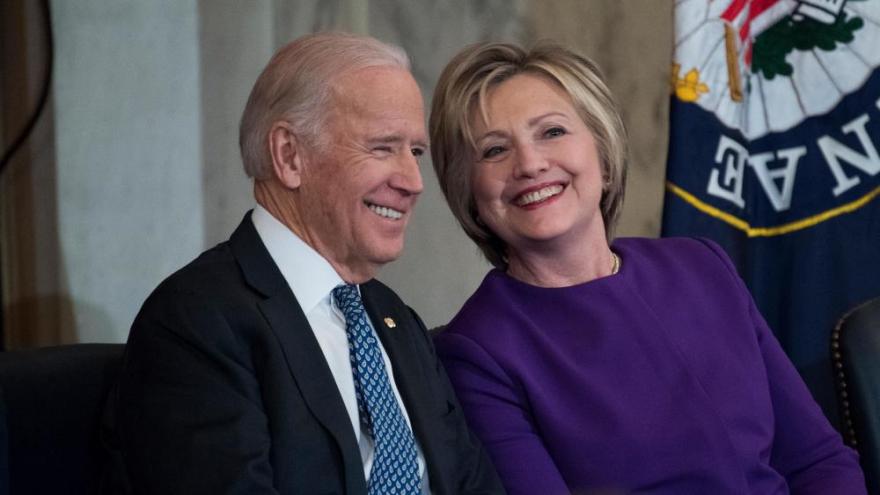 (CNN) -- Hillary Clinton endorsed Joe Biden during a virtual town hall on Tuesday, putting the support of the Democratic standard bearer from four years ago behind the former vice president and current presumptive presidential nominee.

Clinton touted Biden as a "friend" and a figure who has been "preparing for this moment his entire life," as she lambasted President Donald Trump as someone who is so ill prepared to be commander in chief that he appears to be just playing the role on television.

"I want to add my voice to the many who have endorsed you to be our president," Clinton said.

She added, in a nod to the coronavirus, that "this is a moment where we need a leader, a president, like Joe Biden."

Biden called Clinton a "friend" and thanked her for the "wonderful personal endorsement."

The former secretary of state's endorsement was a foregone conclusion -- she had said for months that she would back the eventual nominee -- but it remains a significant boost for Biden because Clinton still enjoys deep support from an array of Democratic voters. She won over 65 million votes four years ago and has proven to be a prolific fundraiser throughout her political career.

But Clinton's endorsement also allows Republicans to dredge up every controversy and attack that they used against the 2016 Democratic nominee, something Republicans are eager to do as they look to recreate the strategy that led to President Donald Trump's victory.

"There is no greater concentration of Democrat establishment than Joe Biden and Hillary Clinton together," Trump campaign manager Brad Parscale said in a statement. "President Trump beat her once and now he'll beat her chosen candidate."

Clinton is the latest top Democrat to back Biden, who after a sluggish start to the primary process saw his fortunes shift by dominating the South Carolina primary and notching a series of key wins on Super Tuesday. Former President Barack Obama, Massachusetts Sen. Elizabeth Warren and Vermont Sen. Bernie Sanders all endorsed Biden earlier this month.

Clinton sat out the primary fight, telling interviewers repeatedly that she was paying attention to the nominating process from afar.

"I'm just watching and hoping that we nominate whoever is the strongest candidate to take out the current incumbent," Clinton said in March, before the field had largely cleared. "That's the only thing that really matters at the end of the day."

But Clinton stepped up her praise of Biden after Super Tuesday, once the former vice president's only opponent was Bernie Sanders, a politician who Clinton has deep-seated animosity for after the Vermont senator stayed in the 2016 primary for months after his path to winning the nomination then was mostly closed.

"He has the experience," Clinton said of the former vice president. "He knows what needs to be done, he can repair the damage that he would be inheriting."

Clinton endorsing Biden is a reversal of what happened to the duo in 2016, when Biden stepped aside and endorsed his former Senate colleague despite wanting to run himself. The decision partially stemmed from former President Barack Obama firmly getting behind Clinton, all but denying his running mate and vice president the chance to run for the job in 2016.

The decision not to run back then has weighed on Biden, though.

"I regret it every day, but it was the right decision for my family and for me," Biden said in January 2016, noting the fact that his son, Beau, had died the prior year. "And I plan on staying deeply involved."

Clinton and Biden share a common story: Both have deep ties to Scranton, Pennsylvania, where Biden was raised and Clinton would spend summers with her grandparents. When Biden endorsed Clinton in 2016, their first event was in the city, where the duo visited Biden's childhood home.

Clinton recalled during Tuesday's event how, when she was secretary of state, they had a standing breakfast date once a week, where they would talk often about work but also about family and their lives.

Clinton concluded her endorsement with a hope for Biden: "I wish he were president right now."