Historic increase in food stamp benefits is on the way 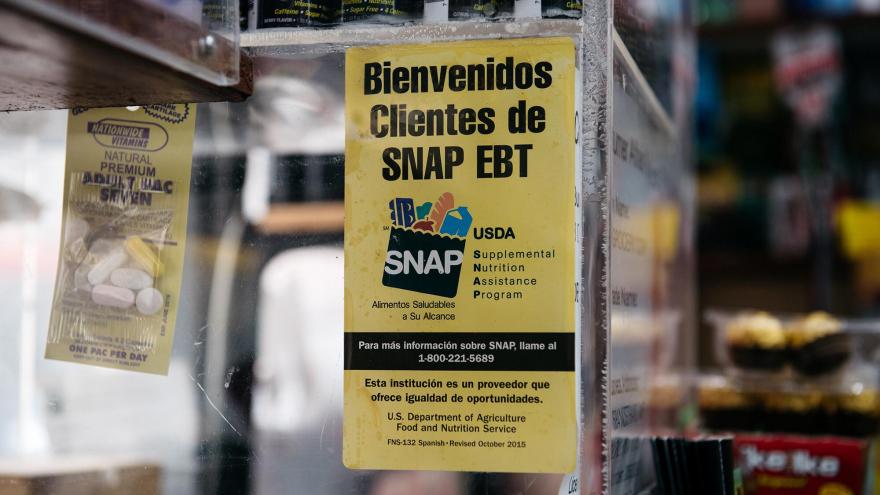 A sign alerting customers about SNAP food stamps benefits is displayed in a Brooklyn grocery store in New York City.

(CNN) -- Food stamp benefits will jump 27% above pre-pandemic levels, on average, starting in October -- the largest increase in the program's history, the Biden administration announced Monday.

The boost, which advocates say is long overdue, stems from an update to the Thrifty Food Plan, which determines the benefit amounts of the Supplemental Nutrition Assistance Program, or SNAP, the formal name for food stamps. The plan estimates the cost of groceries needed to provide a budget-conscious diet for a family of four.

Republican lawmakers, however, are already questioning the revision and its increased cost.

The update comes as part of a USDA review of the food stamp program required under the 2018 Farm Bill. The then-Republican-led Congress ordered the agency to re-evaluate the plan by fiscal 2022 -- and every five years thereafter. It was last adjusted in 2006.

Under the revision, which is permanent, beneficiaries will see a $36 hike in average monthly benefits. They received $121 per person before the coronavirus pandemic.

Including the annual cost of living adjustment, which is based on food price inflation and kicks in every October, the average monthly benefit will jump to $169 per person, the agency said.

"A modernized Thrifty Food Plan is more than a commitment to good nutrition -- it's an investment in our nation's health, economy, and security," said Agriculture Secretary Tom Vilsack. "Ensuring low-income families have access to a healthy diet helps prevent disease, supports children in the classroom, reduces health care costs, and more. And the additional money families will spend on groceries helps grow the food economy, creating thousands of new jobs along the way."

In addition to families with children, many food stamp recipients are disabled Americans or senior citizens on fixed incomes, he noted on a call with reporters Monday.

The new Thrifty Food Plan will add about $20 billion to the program's cost, said Vilsack, adding that Congress did not specify that the revision had to be cost-neutral. Food stamp benefits cost $60.4 billion in fiscal 2019, before the pandemic swelled enrollment and prompted lawmakers to enhance assistance.

RELATED: Federal spending on food aid up 50% but hungry Americans say it's not enough

The update considered four key factors identified in the farm bill -- current food prices, what Americans typically eat, dietary guidance and nutrients in food, the agency said. For instance, the revised plan now includes more fish and red and orange vegetables to align with the latest dietary guidelines recommendations. It takes into account changes in the types of food people buy now, including pre-cut frozen vegetables, canned beans versus dried and fresh orange juice instead of frozen concentrate.

It also uses purchasing data collected from stores, rather than self-reported by households, to reflect the current price of foods. And it added a "modest" increase in calories.

"A lot has changed in 15 years," Vilsack said, stressing that most families these days don't spend a lot of time preparing food from scratch -- one of the factors in the plan prior to the revision.

As it re-evaluated the plan, the agency looked at how to empower cost-conscious, struggling families to make "pretty good" choices that last an entire month, rather than three weeks of the month, Vilsack said.

The adequacy of food stamp benefits has long been a question. Consumer advocates argue that the funds run out before the month is over. But conservative experts point out the program is designed to supplement a family's food budget.

The pandemic sparked a jump in food stamps participation as hunger grew nationwide. More than 42 million people were enrolled in the program in May, up from nearly 37 million in February 2020.

As part of its coronavirus relief packages, Congress enacted a temporary 15% boost to benefits, which is set to expire at the end of September. Lawmakers also raised enrollees' food stamp allotment to the maximum amount for their family size during the pandemic -- a move President Joe Biden extended to an additional 25 million people in very low-income households who originally didn't receive the additional benefits. And Congress augmented other nutrition programs, particularly to help feed children who were not going to school in person.

With these two temporary enhancements, the current average monthly benefit is $243 per person. Starting October 1, when the updated Thrifty Food Plan and cost of living adjustment take effect but the 15% federal boost ends, recipients will receive $251 per person.

The President also asked the agency to look into revising its Thrifty Food Plan to better reflect the current cost of a healthy basic diet, as part of an executive order soon after he took office in January.

Extra help from the federal government has gone a long way to helping struggling Americans put food on the table, particularly as inflation and the cost of food rises.

The number of households with children who sometimes or often didn't have enough to eat over the past seven days fell to just over 10%, its lowest level since the start of the pandemic, after the first monthly installment of the child tax credit was sent in July, according to the Census Bureau's Household Pulse Survey.

Consumer advocates, however, have said for years that the Thrifty Food Plan is outdated. It makes unrealistic assumptions about food affordability and availability today, as well as about the time families have to shop and prepare meals, they argue.

The average cost of a meal in the US is $2.41 -- 22% higher than maximum food stamp benefits, according to a recent Urban Institute report. In 2020, the maximum benefit did not cover the cost of a modestly priced meal in 96% of US counties. The revision, however, will reduce that figure to an estimated 21% of counties.

The value of the plan has been adjusted only for inflation since it was introduced in 1975, while there have been major changes to nutrition science, the food supply, consumption patterns and participants' circumstances since then. Nearly 9 in 10 participants face barriers to providing themselves and their families with nutritious food, with the biggest one being cost, the USDA said in June.

The re-evaluation is an important step, said Lisa Davis, senior vice president at Share Our Strength, which seeks to end childhood hunger and poverty.

"The updated Thrifty Food Plan better reflects the way families live today, where working households do not have unlimited hours to prepare food from scratch and modern dietary guidelines advise a wider variety of foods, particularly leafy greens and lean proteins, which can be more costly," said Davis, noting that nearly 90% of SNAP recipients say their benefits run out before the end of the month.

The original plan was based on two parents in a family, with only one working, said Monica Gonzales, associate director of government relations for No Kid Hungry, an initiative of Share Our Strength. And it assumes families are able to spend up to two hours a day cooking and prepare the majority of their meal -- including bread -- from scratch.

Republican lawmakers, however, are questioning the USDA's update. The GOP leaders on the House and Senate agriculture committees wrote Friday to Comptroller General Gene Dodaro to request that the Government Accountability Office review the agency's methodologies. They asked about the legal justification for changing the USDA's long-standing practice of implementing cost-neutral updates to the Thrifty Food Plan.

"The complexity of this process, and its likely impacts, create an urgent need for scrutiny, particularly on the heels of significant nutrition-related pandemic spending that has continued without rigorous oversight," wrote Sen. John Boozman of Arkansas and Rep. Glenn "GT" Thompson of Pennsylvania.

Vilsack pushed back on the questions of the agency's authority to make the changes, saying Congress didn't place restrictions on the review.