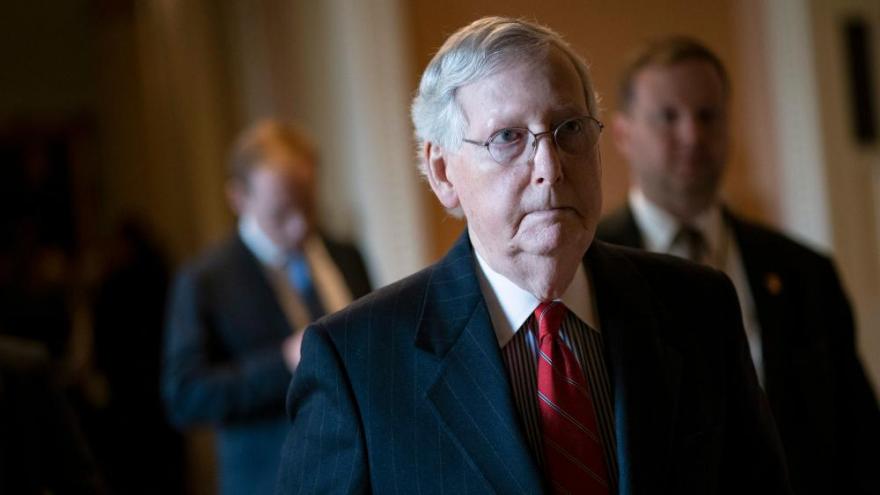 The stalemate over President Donald Trump's Senate impeachment trial is deepening with both sides in the polarized process lacking an incentive to move forward over the holidays.

(CNN) -- The stalemate over President Donald Trump's impeachment trial is deepening with neither Republican nor Democratic leaders in the Senate showing any sign of moderating entrenched positions over the holidays.

They seized on fresh ammunition for their case after the release of emails that show Trump's budget office ordered a freeze in security funding for Ukraine 90 minutes after Trump spoke to Ukrainian President Volodymyr Zelensky on July 25.

The documents suggest a close connection between the call and Trump's pressure on Ukraine to investigate Former Vice President Joe Biden -- the core act at the center of the impeachment case.

But Republicans remain loath to criticize Trump's behavior, despite a pile of incriminating evidence. They argued instead that House Speaker Nancy Pelosi overreached in declining to send the Senate voted-out articles of impeachment charging Trump with abuse of power and obstructing Congress before she learns the shape of the trial.

In a Fox News interview on Monday, McConnell described Pelosi's actions in holding up the articles as "absurd" and hit out at a political "charade" following criticism of Republicans who have already said they will acquit Trump.

Senate Democratic Minority Leader Schumer and McConnell met last week but could not break the deadlock. There is no sign that they will meet again soon with members of Congress dispersed around the nation for the holiday.

"I met with him on Thursday, we had a cordial conversation," Schumer said on Sunday.

"I said, 'we need witnesses and documents, it's only fair, it's only right.' He said, 'no.' I said, 'Please think about it over these holidays.' Let's hope he is."

But McConnell didn't suggest there would be much movement over the seasonal break.

"I think we'll find out when we come back in session where we are," he told reporters at a press conference in Louisville, Kentucky, on Monday.

The standoff means Trump will be left in limbo over his holiday break at his Florida resort, itching for a Senate trial that is all but certain to acquit him.

On Saturday, speaking to a crowd of conservative students, Trump falsely accused Pelosi of violating the Constitution by impeaching him.

House Democratic leaders have not said there is no case. Instead, Pelosi held off on sending articles of impeachment to the Senate until Democrats believe they have a fair structure for the trial. The House also did not appoint impeachment managers before leaving Washington for the holiday break.

"Until we hear from the witnesses, until we get the documents, the American people will correctly assume that those blocking their testimony were aiding and abetting a cover up, plain and simple," Schumer said at a news conference on Sunday.

"President Trump, release the emails, let the witnesses testify, what are you afraid of?"

Democrats also want to hear from Mike Duffey, the political appointee in the Office of Management and Budget responsible for overseeing national security money who requested the budget freeze after Trump's call with the Ukrainian leader.

"This man should testify," Democratic presidential candidate Amy Klobuchar, who as a senator will serve as a juror in the Senate trial, said on CNN's "State of the Union."

On Monday, Schumer sent a new letter to all senators urging the Senate to also seek documents as part of the trial. He called on the administration to hand over material related to the Ukraine pressure campaign, the proposed White House meeting between Trump and the Ukrainian president and the freezing of military aid.

McConnell has refused the request for witnesses, arguing that it is the House's duty to secure testimony and the Senate's job solely to try the case handed over by the other chamber. Democrats in the House declined to mount legal challenges that could last for months to secure testimony from such officials, saying that the President was a "clear and present danger" to the Constitution and national security and needed to be warned that he could not meddle in the 2020 election.

Senate Judiciary Committee Chairman Lindsey Graham reflected the gulf between Pelosi and the Republican-led Senate in an appearance on Fox Business.

"She's actually trying to tell Mitch McConnell how to run the Senate. She's trampling on the separation of powers," the South Carolina Republican said.

"What she is trying to do is get Mitch McConnell to bend to her will, to shape the trial," Graham said.

Pelosi said on Thursday that she was waiting for McConnell and Schumer to cut a deal on the shape of the trial before naming her impeachment managers who will present the Democratic case in the Senate and transmitting the articles of impeachment.

One of McConnell's lieutenants, Missouri Sen. Roy Blunt, told Dana Bash on "State of the Union" Sunday that he believed a deal could be struck by early next year on how to run the trial.

He advocated a compromise under which senators would vote on whether to call witnesses during the trial, using a model of the Bill Clinton impeachment trial two decades ago.

"That's what happened with Clinton. I think that's the best way to approach this. And my guess is, that's what we do."

Such an approach, however, would force Pelosi to give up the leverage that she has by holding the articles of impeachment with no guarantee from the GOP that witnesses can be called.

An alternative solution would be for details of the trial to be set as it goes along by majority votes in the Senate.

That's one reason why Democrats are piling on pressure for witnesses since several GOP senators running for reelection in swing states may want to preserve the perception of a fair trial in order to avoid antagonizing moderate voters.

On "Fox News Sunday," Vice President Mike Pence's chief of staff Marc Short slammed Pelosi's position and predicted that she would back down in the end.

"We are quite confident that this position is untenable and she is going to move it along. And that Chuck Schumer and Mitch McConnell reach a deal on how it's going to proceed in the Senate," Short said.