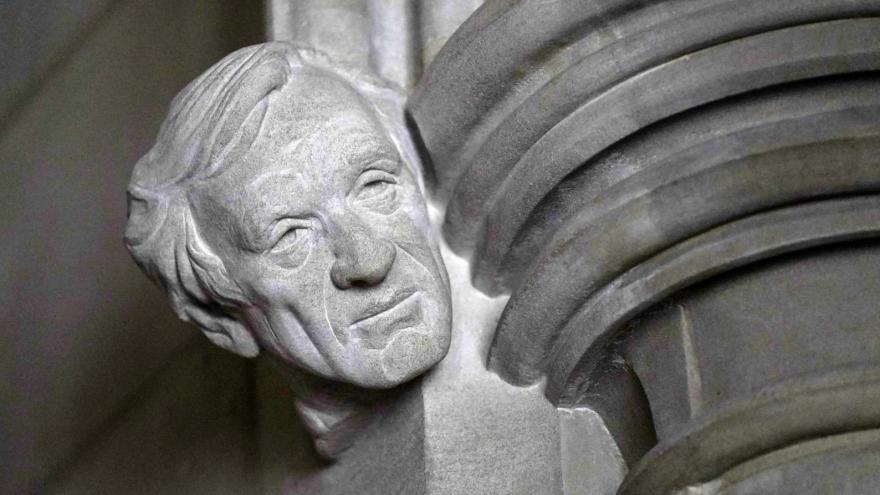 The bust of Elie Wiesel was carved on the Washington National Cathedral's Human Rights Porch.

(CNN) -- The Washington National Cathedral has unveiled a stone carving of Holocaust survivor and Nobel laureate Elie Wiesel to recognize his legacy as a human rights defender "dedicated to combating indifference and intolerance."

The bust was carved in the DC landmark's Human Rights Porch alongside Rosa Parks, Mother Teresa, civil rights activist Jonathan Daniels and Eleanor Roosevelt and others "who have taken significant, profound and life-changing actions in the fight for human rights, social justice, civil rights, and the welfare of other human beings," the cathedral said in a news release.

Wiesel, who died in 2016 at age 87, survived the Auschwitz and Buchenwald concentration camps and wrote dozens of books, including "Night," which documented the horrors he and his family and others faced during the Holocaust. He was awarded the Nobel Peace Prize in 1986.

He became a leading figure in the Holocaust remembrance movement and was a human rights advocate -- speaking out about ethnic cleansing during the Bosnian war, Cambodian refugees and South African apartheid.

Wiesel played a key role in the establishment of the United States Holocaust Memorial Museum in Washington and his words "For the dead and the living, we must bear witness" were engraved at the entrance to the museum.

"From the depths of cruelty inflicted on him, his family, and so many millions of Jews and others during the Holocaust, Elie Wiesel went on to dedicate his life to the pursuit of human rights, and to heed the lessons of history, said the Very Rev. Randolph Marshall Hollerith, dean of Washington National Cathedral, in the news release.

The Cathedral said that the announcement "comes during a time of rising anti-Semitism in the United States and around the world."

"The presence of Wiesel's likeness alongside other prominent human rights defenders from multiple faith traditions underscores the Cathedral's commitment to standing up against hatred, bigotry and antisemitism," the statement said.

Cathedral stone carver Sean Callahan created the bust and Wiesel's family was consulted on its design, the statement said.

Wiesel's widow, Marion, is the vice president of the Elie Wiesel Foundation for Humanity. She said he worked to preserve the memory of the Holocaust and to help keep other communities from suffering the same fate.

"Not only does his presence in the National Cathedral memorialize his life and honor his commitment to human rights; it also ensures that new generations will learn from his teachings and carry the lessons of his life forward into the future," she said in the statement.

A dedication ceremony for the bust will be held in the fall, the cathedral said.

The Washington National Cathedral is the cathedral of the Episcopal Diocese of Washington and was conceived by President George Washington and architect Pierre L'Enfant as a "great church for national purposes." Work didn't start until 1907 and it took 83 years to complete.