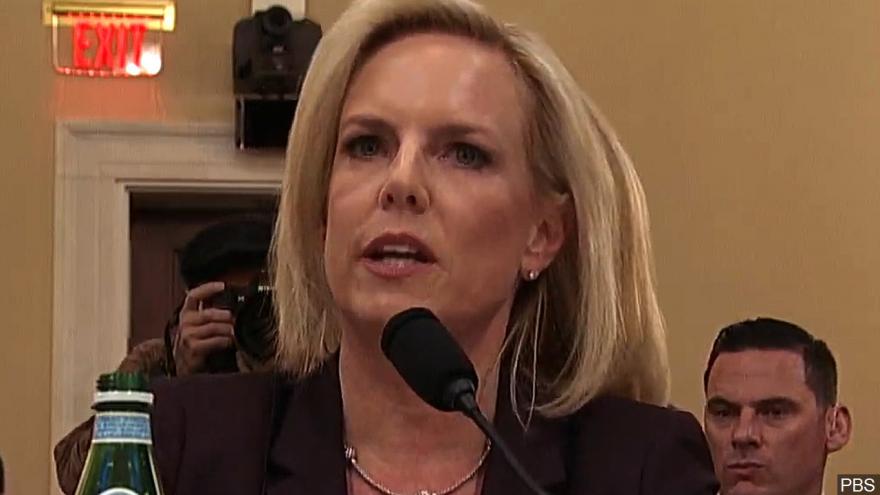 WASHINGTON (AP) — Homeland Security Secretary Kirstjen Nielsen insisted Wednesday the crisis at the southern border is not manufactured, as she faced questions from Democrats for the first time since they took control of the House.

"We face a crisis a real, serious, and sustained crisis at our borders," she said at a House Homeland Security Committee hearing. "Make no mistake: this chain of human misery is getting worse."

Committee Chairman Bennie Thompson said he wanted to use the hearing in part to give Nielsen the opportunity to start a "serious discussion," rather than echoing President Donald Trump's claims of a security crisis at the border, and to say what she knew about the family separations last year. He said real oversight over the border was long overdue.

"No amount of verbal gymnastics will change that she knew the Trump administration was implementing a policy to separate families at the border," Thompson said. "To make matters worse, the administration bungled implementation of its cruel plan, losing track of children and even deporting parents to Central America without their children."

Nielsen was grilled on whether she was aware of the psychological effects of separating children from their parents, and when she knew about the "zero tolerance" policy that led to the separation of more than 2,700 children from parents last year. And she was asked about conversations with Trump as he declared a national emergency at the border to try to gain funding for his proposed wall between the U.S. and Mexico.

"There is an emergency," Nielsen said. "I have seen the vulnerable populations. This is a true humanitarian crisis that the system is enabling. We have to change the laws."

Tens of thousands of families are crossing the border illegally every month, straining resources. Last month, there were more than 76,000 migrants apprehended — it was more than double the same period last year. And she said the forecast is that the problem will grow worse as weather gets better; traditionally the early spring months see higher illegal crossings.

The new figures reflect the difficulties Trump has faced as he tries to cut down on illegal immigration, his signature issue. But it could also help him make the case that there truly is a national emergency at the border — albeit one built around humanitarian crises and not necessarily border security.

The Senate is expected to vote next week and join the House in rejecting Trump's national emergency declaration aimed at building border walls, but Trump would almost certainly veto the measure and the issue is likely to be settled in the courts.

The hearing is one of three at the Capitol on border issues Wednesday. Since Democrats took control of the House, they have prioritized investigating last year's family separations and have subpoenaed documents related to the policy.