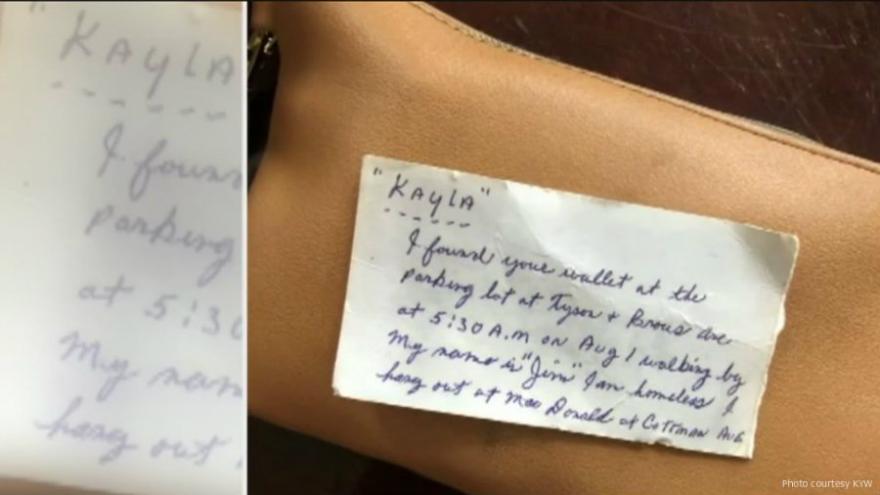 PHILADELPHIA (KYW-TV) -- In just seconds, Kayla Tartaglia knew she was in trouble. Her wallet full of cash, her license and a house key was gone. She left it inside a Mayfair Wawa late Monday night.

“I called the store to see if anyone had turned it in and they said no, so I kind of just gave up and thought someone stole it,” said Tartaglia.

The next day, she says her view of humanity flipped upside down. Her missing wallet was missing no more. It was inside her mailbox just blocks from Wawa.

“Nothing was touched. Not a penny was gone,” Tartaglia told KYW-TV's David Spunt.

But more importantly, she says, was a note left on top of the wallet.

It reads, “I found your wallet at the parking lot at Tyson and Brous at 5:30 a.m. on August 1 walking by. My name is Jim. I am homeless. I hang out at McDonald’s at Cottman Ave.”

CBS Philly was there as she went to that McDonald’s and found Jim who says he never considered taking what was inside.

He told us when he found the wallet it became his responsibility to return it.

“It’s a good thing to do, return something, and what would I want with her bag?” said Jim.

Tartaglia says she learned more than just holding her wallet a little tighter, she learned there are good people out there and Jim inspired her.

To thank him, Tartaglia gave Jim the money inside her wallet when she lost it. They both went on their way but both left feeling good and understanding the importance of honesty.