Homeless relief is on the way, but the crisis could get worse as evictions loom 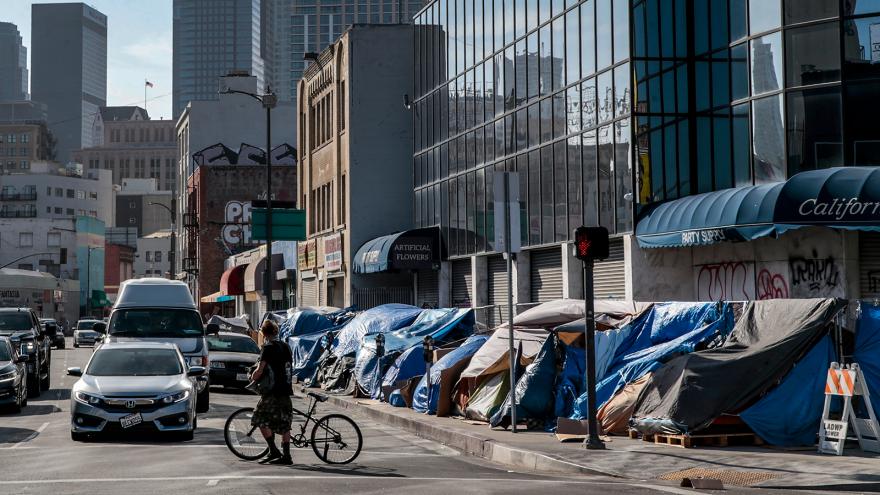 States and cities are racing to use the billions in federal relief aid approved by Congress to fight the growing crisis of homelessness -- but the approaching end of some pandemic benefits threatens to make the problem worse. - Robert Gauthier/Los Angeles Times/Getty Images

(CNN) -- States and cities are racing to use the billions in federal relief aid approved by Congress to fight the growing crisis of homelessness -- but the approaching end of some pandemic benefits threatens to make the problem worse.

The federal government has made a historic $70 billion investment across successive Covid relief packages in helping people find and keep their housing, but the need is about to explode. The federal moratorium on evictions is set to end on June 30 and FEMA will stop subsidizing cities for moving homeless people into hotels in September.

The new relief funding could provide housing for as many as 130,000 people. Yet that's only about a quarter of those who were homeless before the pandemic, which pushed hundreds of thousands more people from their homes.

The problem is evident across the country. In Los Angeles, a judge recently ordered city and county officials to find housing for all the people living on Skid Row by the fall. In Washington, DC, Federal Reserve chair Jerome Powell has spoken about regularly passing by an encampment on his way to work -- a stark reminder that the economic recovery has been uneven if not non-existent for many.

Advocates hope the money goes out quickly to those who need it the most, but also strategically.

"This funding could be transformational and reduce homelessness across the country. It won't end it, but it could make a real dent," said Diane Yentel, president and CEO of the National Low Income Housing Coalition.

Here's how states and cities can use the money flowing from the federal government.

While federal and local eviction moratoriums have helped keep people in their homes during the pandemic, back rent continued to pile up. The nation's renters owed an estimated $57 billion in back rent in January, according to a Moody's Analytics report.

In December, Congress included $25 billion for rental assistance in a broad stimulus package and provided another $27 billion in the American Rescue Plan Act that passed in March.

The pot of money from December is making its way into renters' hands now and the money approved in March will follow after Treasury releases new guidance, which is expected in coming weeks.

States, cities and counties are either ramping up existing rental assistance programs or launching new ones to get the unprecedented volume of funds out the door. There are currently more than 200 of these programs that are open and accepting applications, according to the National Low Income Housing Coalition.

Tenants must meet an income requirement, show they've lost income during the pandemic and demonstrate a risk of homelessness in order to qualify for the money.

There's an influx of aid for those who have already lost their housing. In March, Congress allocated $5 billion to provide about 65,000 housing vouchers that can be used by families at risk of homelessness to pay rent.

The money has yet to be released by the Department of Housing and Urban Development, which has about another month to begin disbursing the funds to local public housing agencies. The vouchers can be issued through September 2023.

In many areas, there were long waiting lists for housing vouchers even before the pandemic. In normal times, three out of four low-income renters eligible for housing assistance do not receive it because of funding limitations.

Sometimes, however, those who receive a voucher are unable to find an affordable place to live and don't end up using it.

Buying hotels, motels and unused apartment buildings to convert into affordable housing is one way cities are already addressing homelessness. During the pandemic, California provided more than $800 million in grants to support 93 of these projects.

Another $5 billion from the American Rescue Plan is meant to continue this effort across the country. The funds have already been released from the Department of Housing and Urban Development to cities and counties that can decide how to exactly use the money.

"It won't happen overnight, but we have this unprecedented confluence of desperation on the part of hotel and motel owner and the infusion of federal resources that could make a permanent change," said Eric Tars, legal director at the National Homelessness Law Center.

There's some flexibility on how to use these funds, as long as the money primarily benefit people at risk of experiencing homelessness and those fleeing domestic violence. It must be spent by 2030.