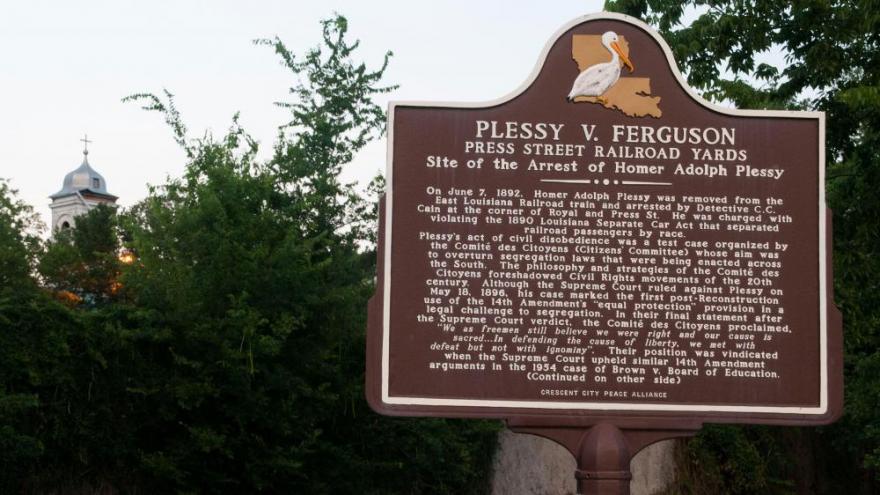 A historical sign marking the arrest site of Homer Adolph Plessy in New Orleans, Louisiana. Plessy has received a full pardon from the state.

The governor was joined by Plessy descendants at a ceremony in New Orleans, where he officially signed the pardon. The ceremony, which was attended by city leaders and relatives, was near the original location where Plessy was arrested nearly 130 years ago.

Plessy, a shoemaker, purchased a first-class ticket on June 7, 1892, to board a Louisiana train. He sat in the Whites-only section and refused to leave when a conductor ordered him to move to a rail car reserved for Blacks. He was arrested and convicted at a trial of violating the Separate Car Act of 1890.

Edwards' signature comes after the Louisiana Board of Pardons voted unanimously last November in favor of a pardon for Plessy, who died in his 60s in 1925.

"This pardon has been a long time coming but it's a day that should have never happened," Edwards said.

Plessy appealed his case to the Supreme Court. Four years later, the justices rejected his claim.

Plessy v. Ferguson was a landmark case in which the court, on May 18, 1896, by a seven-to-one vote, found a Louisiana statue requiring separate but equal railroad cars for Black and White passengers did not conflict with the 13th and 14th Amendments. According to Brittanica.com, after the Supreme Court ruling, Plessy went back to Judge Howard Ferguson's court and pleaded guilty. He paid a $25 fine.

"We still have a long way to go when it comes to equality and justice, but this pardon is certainly a step in the right direction," Edwards said.

Plessy, who was one-eighth Black, was not caught off guard: He'd been among a group working with the Eastern Louisiana Railroad Company to protest the state law requiring rail companies to provide "separate but equal" places for white and nonwhite customers, and for patrons to follow suit.

After the ruling, Plessy lived in New Orleans and worked as a clerk, collection agent for an insurance company, laborer or a warehouse worker. He stayed active in several social organizations.

The so-called "separate but equal" doctrine was ultimately overturned by the Supreme Court in 1954's ruling in Brown v. Board of Education.

"We are proud to be a part of the processing of this application under the authority of the Avery C. Alexander Act," Francis M. Abbott, executive director of the Louisiana Board of Pardons and Committee on Parole, previously said.

The Avery C. Alexander Act is a Louisiana law which allows the governor to pardon people convicted of violating a state law or local ordinance created to enforce racial separation or discrimination.