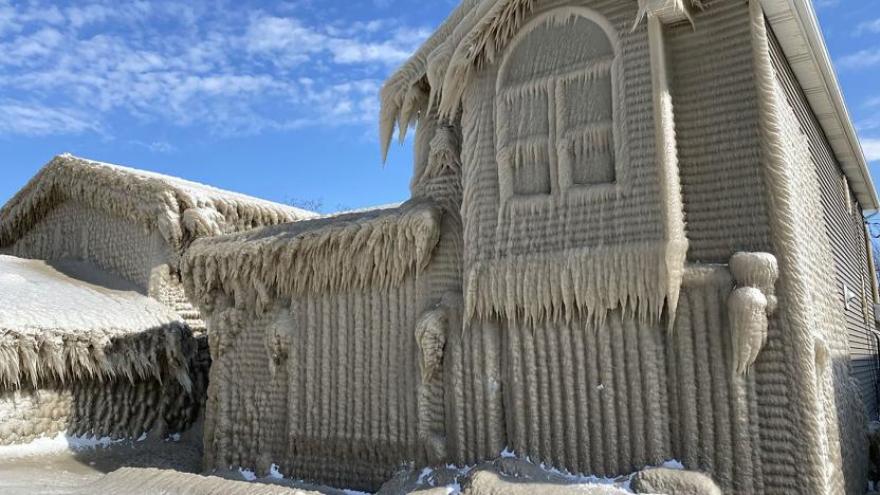 The ice covering the houses is up to 3 feet thick.

(CNN) -- Instead of a winter wonderland, residents living along the shore of Lake Erie in New York woke up this weekend to a winter nightmare when they found their homes completely encased in thick ice.

Ed Mis has lived in his home in Hamburg, New York, for the past eight years, and while the neighborhood has seen ice coatings before, he said this is the first time it's been this bad.

"It looks fake, it looks unreal," Mis told CNN. "It's dark on the inside of my house. It can be a little eerie, a little frightening."

His home on South Shore Drive in the Hoover Beach neighborhood of Hamburg, about 9 miles south of Buffalo, is covered in several feet of ice and his backyard has about 12 feet of ice, Mis told CNN by phone.

Mis said that there was no ice in his yard or home on Thursday but by Friday morning his home and others were completely covered.

The ice makes the houses appear as if they're ice sculptures or something out of the movie "Frozen."

And while the sight is definitely surreal and remarkable, residents are worried it could cause structural damage to their homes.

"We're worried about the integrity, of structure failure when it starts to melt, because of the weight on the roof," Mis said.

To blame? No, not Elsa, but 48 straight hours of gale force winds.

The winds created huge waves, driving lake water up on the shore, according to the Weather Channel.

"When you are down in the low to mid-20s, all of that spray that comes up and hits the buildings is going to freeze and make it a giant icicle," winter weather expert Tom Niziol told the Weather Channel.

The ice has started to melt a bit since Friday, Mis said, but he hopes the governor will approve an emergency declaration to help the neighborhood recover.

"It's a beautiful sight, but I don't want to live through it again," Mis said.