Hong Kong is holding a de facto referendum on protests 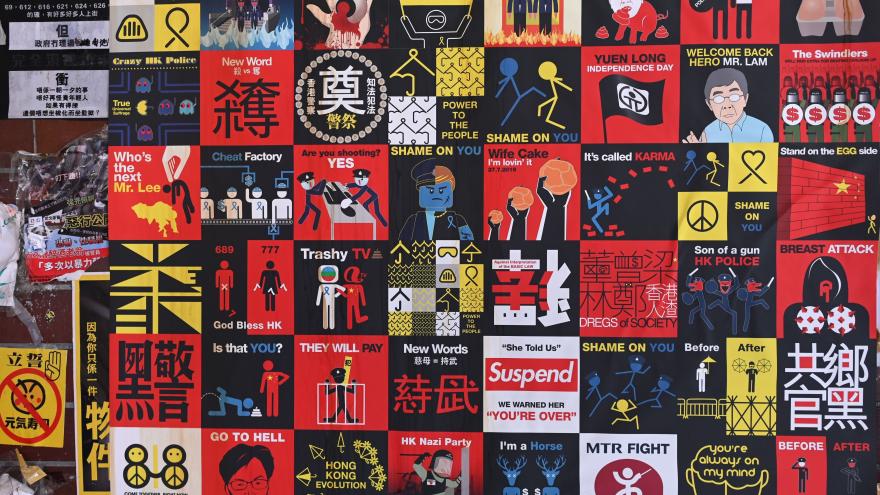 (CNN) -- More than 4 million Hong Kongers will vote for hundreds of district council seats Sunday in what is being framed as a referendum on the protests which have roiled the Asian financial hub for almost six months.

Hong Kong elections are traditionally peaceful, even dull, but officials have warned that, amid the heightened tensions in the city, they will not hesitate to postpone the vote or close polling stations in the instance of violence. Riot police will be stationed in "inconspicuous" locations inside every polling station, police told CNN.

After months of unrest with both sides claiming to represent the will of the majority of Hong Kongers, Sunday's vote offers the first objective test of how people in the city feel about the protests and the government.

According to the government, the protests have lost public support and a silent majority of Hong Kongers are sick and tired of the violence and chaos, and they stand behind the police in doing everything necessary to stop the unrest. According to protesters, the city is with them, no matter the cost, and the lack of mass public rallies in recent months is only due to increasing restrictions on public assembly.

This debate has been playing out for months now, with the divide widening and the conversation becoming ever more toxic. Both sides can point to evidence in their favor -- people coming out to clear streets of barricades; sympathy protests by white-collar workers -- but this week, we will finally get an answer.

Unlike Hong Kong's Legislative Council (LegCo) -- which is chosen by a semi-democratic web of directly elected seats, functional constituencies and closed races -- the district councils are the only official bodies in the city elected by universal suffrage; one person, one vote.

This year also represents the first time that all 452 constituencies are being contested, meaning that all registered voters, about 56% of Hong Kong's 7.4 million population, will get a say. In the past, lackluster engagement has meant pro-Beijing candidates ran unopposed in some areas, aiding their control of all 18 separate district councils.

District councils are elected on five-year terms, and largely handle local affairs. They lack much in terms of real power, serving mainly to advise the government on issues affecting their neighborhoods and the allocation of funds for local projects.

The vote has taken on an outsized importance in recent years, however, as a way of signaling wider discontent about the slow pace of political reform.

"In the past 10 years or so, the lack of progress towards universal suffrage has improved participation over the last three district council elections," said Kenneth Chan, an expert on politics and governance at Hong Kong Baptist University. Turnout in 2015 was 47%, compared to around 38% in 2007 and closer to the amount who vote in the LegCo elections, typically seen as far more important.

Chan said that it was "unprecedented that all 452 constituencies are contested," and this raises the "theoretical possibility that the anti-government block might be able to win more than half of the constituencies." Doing so would not only send a clear message to the government, it could also influence the selection of the next Chief Executive, Chan added.

The district councils choose 117 of the 1,200-member "broadly representative" committee that currently chooses the city's leader, meaning substantial gains could mean pro-democrats have more of a say in who succeeds embattled current leader, Carrie Lam, in 2022.

At present, pro-Beijing parties control all 18 district councils, so any victory for the broader pro-democracy camp will inevitably be cast as a win for protesters.

Earlier this month, the city's number two official, Matthew Cheung, told legislators the government could not understand public anger because there were no public opinion polls available and "people could be upset about various things."

Cheung's statement not only ignores the widely respected polls that are available -- they typically show lackluster approval for the government and strong support for the protesters -- it also acts as if the established demands of the protest movement are hard to understand.

For months now, protesters have consistently stuck to the slogan "five demands, not one less."

Those five demands are: withdraw the extradition bill that kicked off the entire crisis (since achieved); launch an independent inquiry into allegations of police brutality; retract any categorization of a protest on June 12 as a "riot"; amnesty for arrested protesters; and introducing universal suffrage for how the Chief Executive and Legislative Council are elected.

While some candidates are running on fairly standard local council issues -- "eliminate illegal parking," "build an animal friendly community," "strengthen environmental conservation" -- a substantial minority, around 13%, include the phrase "five demands, not one less" in their election material.

In two districts, Sai Kung and Kowloon City, more than 25% of candidates mention the five demands, while 23% of candidates in the northern district of Yuen Long, mention another key issue, calling for an investigation into the attacks on protesters in the local subway station on July 21.

However, there is suspicion among some in the protest camp that some of the less well known pro-democracy candidates standing are not what they appear -- and instead are aiming to split the vote. To counter this, Power For Democracy, an umbrella group for pro-democracy parties, has issued a list of 397 candidates it endorses, one in all but 55 constituencies. This list has been widely shared by protesters on messaging apps and AirDropped to strangers on the subway.

In the past, the pro-Beijing camp has been far better at coordinating than opposition parties, amid accusations Chinese officials sometimes intervene to pressure candidates to drop out so as not to split the vote. This year, the Democratic Alliance for the Betterment and Progress of Hong Kong (DAB), the largest pro-Beijing party, is fielding 179 candidates.

Whether the message sent by voters on Sunday will be heard remains to be seen.

Almost certainly, given the mood in the city at present, both will claim foul play, despite Hong Kong's long record of free and fair elections (within the limits of the system). Some protesters were already complaining of police plans to station riot officers at polling stations, claiming it risked intimidating voters.

A big loss for pro-government parties could increase pressure on Hong Kong leader Carrie Lam to come up with a political solution to the ongoing crisis.

By contrast, if pro-democracy candidates fail to win a significant number of seats, Lam and the central government in Beijing could use it to justify more hardline tactics against protesters.

Of course, this assumes the vote goes ahead at all. The big question hanging over Sunday is whether officials will suspend polling or postpone the elections entirely, which they have the power to do so in certain instances. Election authorities said December 1 has already been reserved as a potential backup polling date.

Uncertainty has dogged Hong Kong for months now, not least about where all this is going. Should the elections go ahead this week, at least finally some questions will be answered.