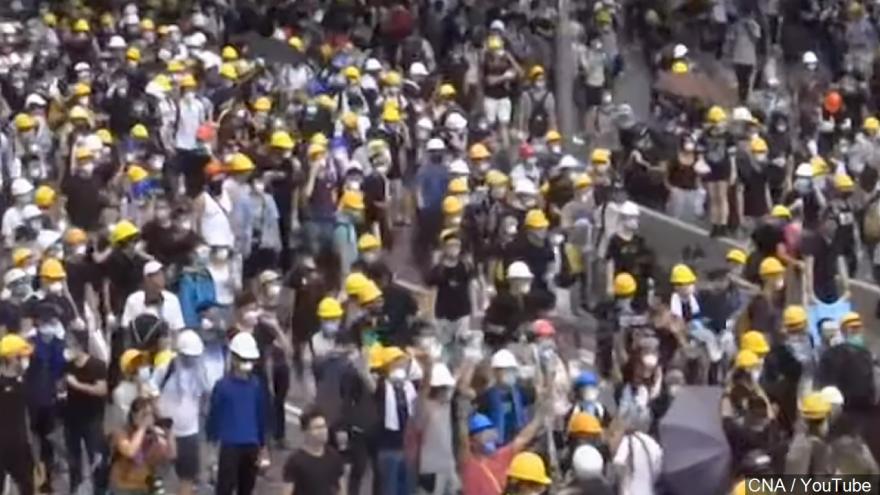 "People in Hong Kong want a relatively peaceful and calm environment," Lam told reporters. She said it was time "for responsible government to restore as quickly as possible this calmness in society."

Lam told reporters she took the move in response to widespread public unhappiness over the measure, which would enable authorities to send some suspects to stand trial in courts in mainland China.

Many in the former British colony worry the measure would further erode cherished legal protections and freedoms. Lam said the government would study the matter further, for the "greatest interest of Hong Kong."

"After repeated internal deliberations over the last two days, I now announce that the government has decided to suspend the legislative amendment exercise," Lam said.

"I want to stress that the government is adopting an open mind," she said. "We have no intention to set a deadline for this work."

Lam apologized for what she said were failures in her government's work to convince and reassure the public, but said she has not withdrawn the bill.

She said she would "adopt a sincere and humble attitude in accepting criticism" over the government's handling of the issue.

Lam made the announcement as another mass protest was expected on Sunday, after clashes that turned violent on Wednesday, leaving about 80 people injured including 22 police officers.

The standoff between police and protesters in the former British colony escalated into Hong Kong's most severe political crisis since the Communist Party-ruled mainland took control in 1997 with a promise not to interfere with the city's civil liberties and courts.

Lam, chosen by Beijing to be the highest-level local official, has been caught between her Communist Party bosses and a public anxious to protect the liberties they enjoy as a former British colony.

She apologized for what she said were failures in her government's work to convince and reassure the public, but said she has not withdrawn the bill.

Lam said the legislation is still needed to address various deficiencies in Hong Kong's law. She said one of the factors driving the government's rush to get it enacted was criticism by the anti-money laundering Financial Action Task Force.

"We will try it again if circumstances permit," Lam said.

Appearing calm and cheerful, at least at first, she parried questions over whether she should step down and said she had strong support from Beijing for her decision.

"I can tell you the central people's government has confidence in my judgment and they support me," she said. She did not confirm, when asked, if she had met with Vice Premier Han Zheng to discuss the situation but said she had reported on the issue to Beijing.

Lam emphasized that a chief concern was to avoid further injuries both for the public and for police.

"It's possible there might be even worse confrontations that might be replaced by very serious injuries to my police colleagues and the public," she said. "I don't want any of those injuries to happen."

Lam defended the forceful moves by police during protests earlier in the week, saying some of those involved were "very violent."

"Have you seen those bricks?" thrown by protesters, she asked.

Adding to tensions, the extradition bill has drawn criticism from U.S. and British lawmakers and human rights groups, prompting Beijing to lash back with warnings against "interference" in its internal affairs.