Hopes for DC statehood rise with Democrats back in power 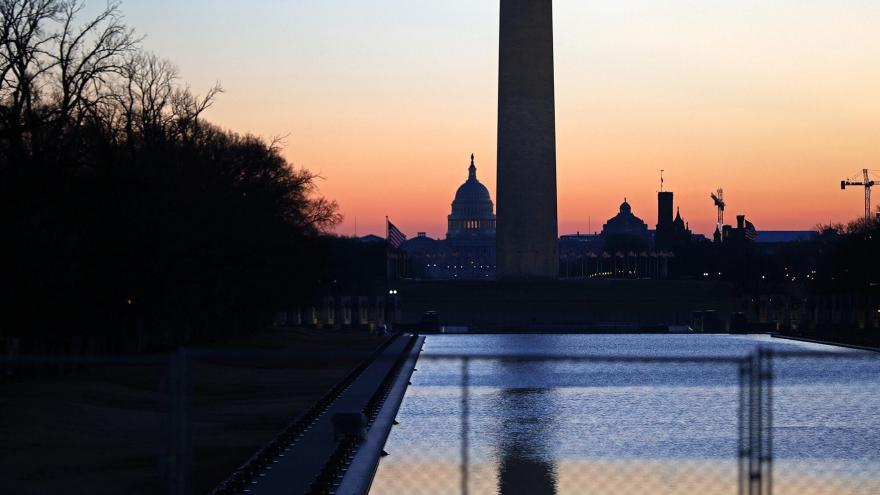 After decades of pushing for representation, supporters of DC statehood feel that they're in the strongest position in a while to advance legislation admitting DC into the Union.

(CNN) -- Advocates fighting for Washington, DC, to become the 51st state are more hopeful than ever that they'll achieve statehood with Joe Biden in the White House and Democrats now controlling both chambers of Congress, though the effort still faces an uphill battle to gain traction.

After decades of pushing for representation, supporters of DC statehood feel that they're in the strongest position in a while to advance legislation admitting DC into the Union.

But the effort, which enjoys broad support among Democrats, could get lost in the sea of challenges facing Biden's administration and Congress -- including the Covid-19 crisis and its economic challenges, as well as a laundry list of promises the new President pledged to address early into his term.

Activists are fighting to break through to key lawmakers, and pushing the Democratically controlled Senate to move legislation along, as details from the January 6 insurrection on Capitol Hill revealed what some see as the limits of the district's power to protect itself.

Last week, House Speaker Nancy Pelosi highlighted the district's inability to call the National Guard when asked about security for the Capitol during the riot last month.

"One important thing that would be really good is if Washington, DC, if the District of Columbia could operate as a state, as (what) any governor can do is to call out the National Guard without getting the permission of the federal government," Pelosi said at her weekly news conference on February 11. "It shouldn't have to happen that way."

DC Mayor Muriel Bowser said later that same day that she agreed with Pelosi's comments on being able to call the National Guard, telling reporters, "That is something that is tops on our list on our way to DC statehood."

In a historic move last June, the US House passed a bill that would make DC a state with a vote of 232-180 -- the first time a chamber of Congress had advanced a DC statehood measure. But the bill was dead on arrival in the then-GOP controlled Senate and President Donald Trump made clear he was opposed to DC statehood.

"If the last session is a turning point, when we didn't have a Democratic president, this session we're even more hopeful in the 117th Congress -- when we have all the stars aligned," Del. Eleanor Holmes Norton, DC's nonvoting member in the House who reintroduced the bill last month, told CNN in an interview.

Norton and fellow statehood advocates feel "confident" that her bill will pass the House again given its high number of 210 cosponsors and House leadership's commitment that the bill would receive a House floor vote.

But the US Senate is where DC statehood faces its toughest hurdle -- and activists like DC Vote's Executive Director Bo Shuff acknowledge "there's a lot of work to do still" in getting the bill passed in the chamber.

In the meantime, Norton is also pushing legislation that will give DC's mayor control of the National Guard and end the President's authority to federalize DC's police department.

Last week, Democratic Sen. Tom Carper of Delaware reintroduced his companion statehood bill, touting the number of cosponsors as the most thus far in supporting the bill.

The opposition in the Senate

Carper's bill currently has 39 Democratic cosponsors, including Senate Majority Leader Chuck Schumer who posted on Twitter that it's "past time to make" DC statehood "a reality."

But there were still some notable holdouts even among Democrats, like West Virginia's Joe Manchin, making it uncertain whether the party could find 50 votes to pass the bill by a simple majority. In this scenario, Vice President Kamala Harris, who supports DC statehood, could act as the tie-breaking vote.

Since the Constitution says Congress should be in charge of the seat of government, which will be a "District (not exceeding ten Miles square)," the DC statehood bill would shrink the seat of federal government to the areas that include the White House, the US Capitol, Supreme Court, and other federal buildings along the National Mall. The rest of DC would be admitted as a state, renamed the Washington, Douglass Commonwealth, after abolitionist Frederick Douglass.

The more than 700,000 DC residents do not have a voting member of Congress, but the 23rd Amendment, enacted in 1961, gives them a say in presidential elections. Under Norton and Carper's legislation, DC would be granted two US senators and the existing sole House representative would be made a voting member. The bill would also expedite consideration of a joint resolution repealing the amendment.

Proponents say the bill's strategy of redesigning the capital's bounds would sidestep constitutional concerns, and that it would only need to be approved by Congress and signed by the President to be effective.

No Republican senators have signed on to the bill, and last year, several strongly objected to the idea of DC statehood, calling it unconstitutional and a "Democratic power grab" that would "empower the most radical agenda in modern American politics."

They argue the 23rd Amendment would have to be repealed with a constitutional amendment, which may take years, and could leave the President and the first family with three electoral votes as residents of the newly drawn federal enclave -- suggesting that even if this legislation could advance through a Democratically controlled Congress and signed by a Democratic president, it would likely be met with legal challenges.

Senate Republicans opposed to DC statehood would likely deploy the filibuster to block the bill -- which then would require 60 votes to end debate and move to a final vote. In that case, Democrats would need 10 Republicans to join with them in breaking a filibuster.

Norton predicted that if Democrats could retain control for the Senate for another term, they could be "on our way to getting rid of the filibuster and on our way to DC statehood."

Stasha Rhodes, the campaign director for 51 for 51, told CNN that they also have "strong confidence" in Schumer to "do what's necessary to make sure there's a vote on DC statehood and make sure the caucus is in strong support of DC statehood."

Manchin, a moderate from a state Trump won by large margins twice, told CNN's Jake Tapper in an interview last month that while he's a "no" on eliminating the Senate filibuster for legislation, he's open to considering statehood for Washington.

"I don't know enough about that yet. I want to see the pros and cons. So, I'm waiting to see all the facts. I'm open up to see everything," he told Tapper on CNN's "State of the Union."

The Senate bill is currently with the Senate Homeland Security and Governmental Affairs Committee for consideration.

Meanwhile, the Senate is in the process of confirming Biden's Cabinet appointees and still working to get relief for millions of Americans struggling financially during the Covid-19 pandemic, after wrapping a week-long impeachment trial finding Trump not guilty of inciting the deadly January 6 riot at the US Capitol.

Norton said she supports a committee hearing on the DC statehood bill, arguing that it would increase attention on the bill and boast public support, which would ultimately bode well for Senate passage.