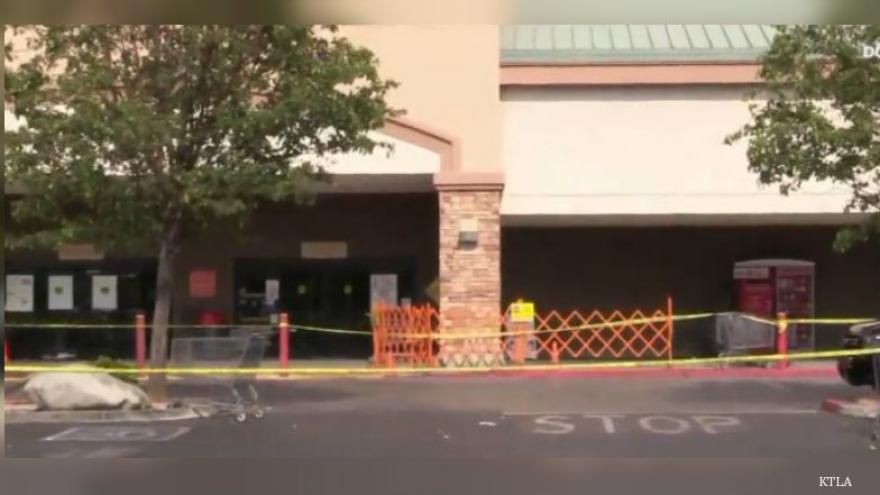 California (KTLA) -- A dead body found inside a stone pillar outside a Lancaster grocery store on Saturday afternoon could be the remains of a man who was fleeing from authorities earlier in the week, a Los Angeles County Sheriff's Department lieutenant told KTLA.

After a strong odor led to the grisly discovery, authorities said it's possible the body belongs to a man who ran into the store on Monday — fleeing from deputies as he was suspected of stealing a vehicle.

The body was found inside a stone pillar located just outside the WinCo Foods grocery store in the 700 block of West Avenue K, authorities said. Deputies were called to the scene at 2:40 p.m.

Earlier, in the morning, a manager at the grocery store could smell a strong odor coming from the pillar, according to Sheriff's Department Lt. John Corina.

Corina said the manager called a plumber, thinking there was some sort of sewage problem there. When the plumber arrived and started to knock away the pillar's stone, a leg and tennis shoes were visible, he said.

At that point, law enforcement officials were called to the scene.

Upon investigating the finding, authorities linked it to an incident earlier in the week.

On Monday, Corina said, a man was pulled over by deputies after he was suspected of driving a stolen vehicle. He ran into the grocery store and went onto the rooftop as he fled from deputies.

They never got ahold of him, and according to Corina, the rooftop has access to the inside of the stone pillars where the body was found. It's possible the man fell or climbed into the pillar to hide from law enforcement.

But with the recent heat wave and the density of the stone pillar, it's possible the man then became trapped and unable to breathe, Corina said, describing it as a "horrible way to die."

"It's unusual. I've never seen anything like this before — some body inside a column," Corina said. "Somebody tries to hide from the police and they can't get out and end up dying in there.

Authorities had to wait until the evening for the coroner to arrive. At that point, officials began to work to break open the pillar so the body could be removed and identified.

In video of first responders at the scene, they could be seen removing a body from inside a pillar located just outside the entrance to the grocery store. Firefighters were seen chipping away at the pillar's stone material as the body inside was increasingly visible.

Caution tape was seen hung around the parking lot just outside the grocery store.

Area residents told KTLA on Sunday morning that they were shocked to hear of the discovery.

“It’s terrible,” Sunshine York-Hanger said. “I was just thinking, you know, I wonder if he was trying to get anybody’s attention and nobody would know. Nobody would know where it’s coming from, the voice, you know, if that’s the case because I’m hoping it was instant if that was what happened.”