House approves $2.2 trillion stimulus plan from Democrats with no bipartisan deal in sight 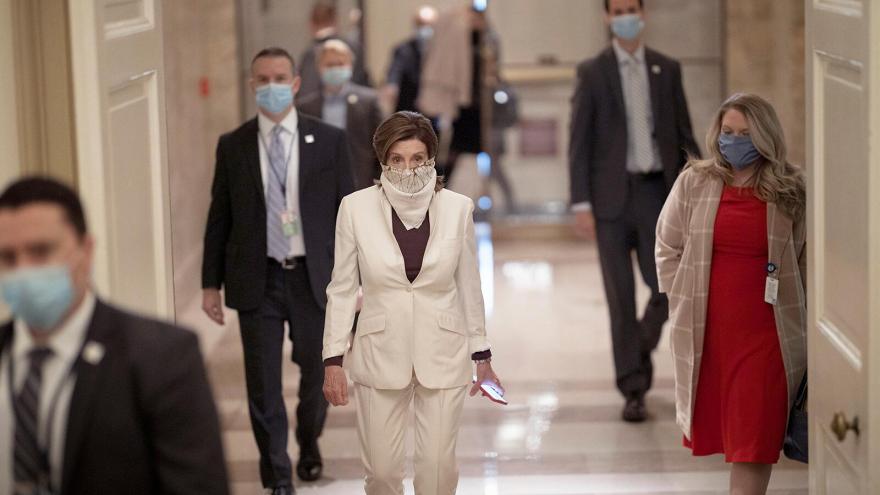 Speaker of the House Nancy Pelosi arrives at the Capitol on April 23, 2020 in Washington, DC.

(CNN) -- The House of Representatives on Thursday approved a $2.2 trillion coronavirus stimulus proposal put forward by House Democrats with no bipartisan deal in sight, even as House Speaker Nancy Pelosi and Treasury Secretary Steven Mnuchin have continued talks in an effort to reach an agreement.

The measure passed largely along party lines amid GOP opposition with a final tally of 214-207. Eighteen Democrats crossed party lines to vote against the bill, while Republicans were united in opposition.

The legislation will give Democrats something to point to as lawmakers face pressure from constituents to deliver more aid as the pandemic continues to take a devastating toll across America. But the Democratic plan has been rejected by Republicans as too costly and is not expected to be taken up by the GOP-led Senate, and time is quickly running out to clinch a bipartisan agreement that could be signed into law ahead of Election Day.

Pelosi, as she walked off the House floor, told a group of reporters Thursday evening ahead of the vote that there will be no agreement on any stimulus deal Thursday night, but talks with Mnuchin will continue.

Pelosi said she was headed back to her office to review documents sent to her by Mnuchin and would figure out where things go next after that.

Pelosi and Mnuchin spoke by phone on Thursday afternoon, but after the call there was still no deal at hand.

Drew Hammill, Pelosi's deputy chief of staff, tweeted later that during the call "the two discussed further clarifications on amounts and language but distance on key areas remain. Their conversation will continue this afternoon."

In an indication of how challenging it may be to reach a bipartisan agreement at this point, Pelosi, on a private call with the House Democratic whip team Thursday morning, sounded very down about the prospects of a deal for a new stimulus package to respond to the Covid-19 pandemic and its economic fallout, according to two people on the call.

Pelosi repeatedly spoke of the "different values" held by Democrats and Republicans, making clear that even the latest offer from Treasury Secretary Steven Mnuchin fell far short of what was needed to deal with her view of the scale of the current economic issues.

Pelosi's framing on the private call earlier Thursday tracks with the criticism she's leveled at Republicans during stimulus negotiations for months -- that the Trump administration simply isn't willing to do what's necessary on the fiscal side of things to address the depth of the economic problems created by the pandemic.

Republicans have said that it is now up to Pelosi to counter the roughly $1.6 trillion proposal Mnuchin put on the table Wednesday, which is hundreds of billions of dollars away from the roughly $2.2 trillion plan House Democrats voted to approve Thursday.

Pelosi said earlier on Thursday during her weekly news conference that she is "hopeful that we can reach agreement" on a bipartisan deal, but nevertheless made clear that the two sides are not on the same page on key issues.

"We're kind of in the ballpark on some things," Pelosi said, but added, "still way off in terms of state and local government." She also said that Democrats "have concerns about a sufficient amount of money to address the unemployment insurance needs of the American people."

Both the White House and House Democratic leaders are struggling with internal party divisions over how to move forward in the stimulus talks.

For months, moderate Democrats in the House have been pushing their leadership to go back to the table and get a deal with the White House on stimulus rather than forging ahead with another Democratic-only package.

Fourteen Democratic members voted against the original HEROES Act back in the spring, arguing it was not a plan that was going to be signed by the President.

On the Senate side, GOP lawmakers are growing uncomfortable with reports that Mnuchin is stretching beyond $1.5 trillion in his offer to Pelosi. Multiple GOP senators told CNN that number could be a major issue, forcing Senate Majority Leader Mitch McConnell to eventually choose if he is willing to put a bill on the floor that loses a large number of his members.