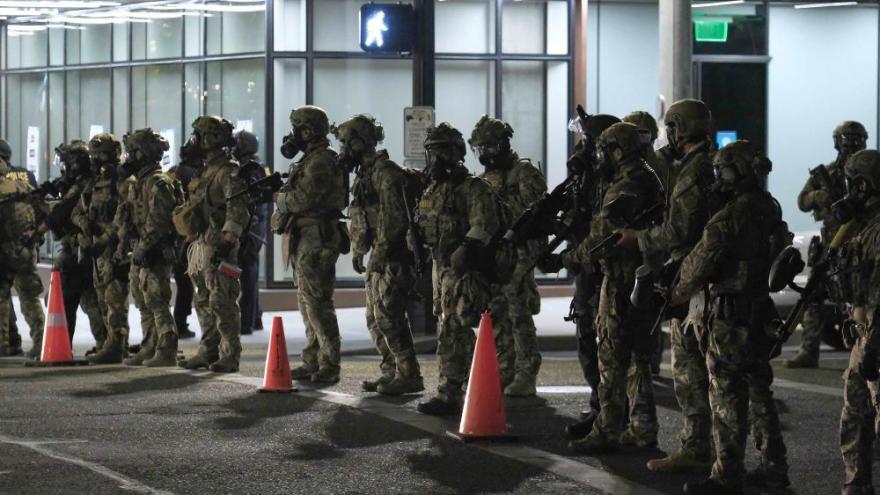 Multiple Democratic House committee chairs have called for an immediate watchdog investigation into the actions federal officers in Washington, DC, and Portland have taken in response to protests spurred by the death of George Floyd and police brutality.

(CNN) -- Multiple Democratic House committee chairs have called for an immediate watchdog investigation into the actions federal officers in Washington, DC, and Portland have taken in response to protests spurred by the death of George Floyd and police brutality.

"As we continue to stand with our fellow citizens protesting systemic racism and police brutality throughout the country, we are increasingly alarmed at the Trump Administration's use of federal law enforcement to violate the civil rights of our constituents," the letter states.

Federal officers were deployed in Washington in June and were part of the discordant and violent spectacle in Lafayette Square near the White House where police clashed with protesters ahead of a photo op President Donald Trump held at a nearby church.

And in Portland, where protests have continued in the weeks since the police killing of Floyd in Minneapolis in late May, federal officers have been seen on video masked, in camouflage and without clear police insignia, arresting protesters and placing them in unmarked vehicles.

"This is a matter of utmost urgency. Citizens are concerned that the Administration has deployed a secret police force, not to investigate crimes but to intimidate individuals it views as political adversaries, and that the use of these tactics will proliferate throughout the country," the committee chairs wrote. "Therefore, we ask that you commence your review of these issues immediately."

The US attorney for Oregon has also called for DHS' inspector general, Joseph Cuffari, to investigate the federal agents' actions.

Other leaders in the state, including its Democratic governor and the mayor of Portland, have recently called for the federal agents to leave the city.

Mayor Ted Wheeler said on CNN's "State of the Union" earlier Sunday that agents are denying residents due process during arrests.

"People are being literally scooped off the street into unmarked vans, rental cars, apparently. They are being denied probable cause. And they are denied due process. They don't even know who's pulling them into the vans," Wheeler said, adding: "As far as I can see, this is completely unconstitutional."

Both Trump and DHS' acting secretary, Chad Wolf, have defended the actions of the agents. In a tweet Sunday morning, Trump claimed the federal government was trying to "help" Portland amid the unrest.