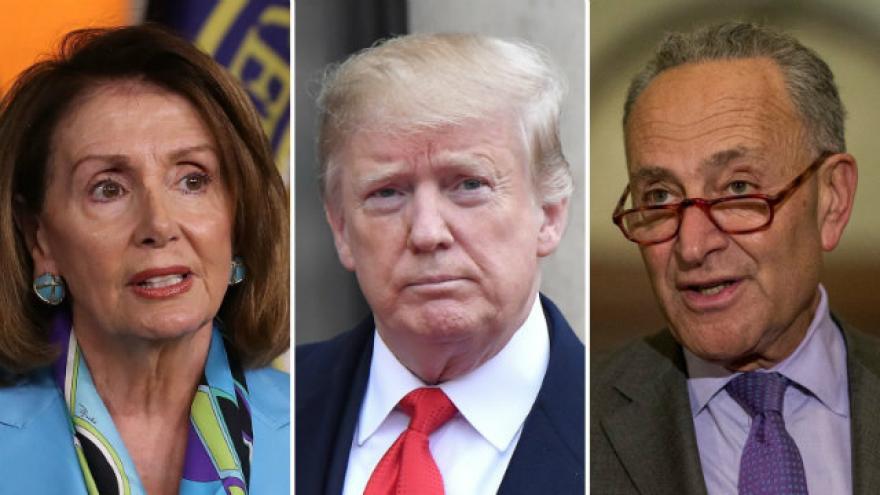 House Democrats will vote on a legislative package to reopen the government when they take over the chamber on Thursday, a Democratic aide confirms to CNN. Photo courtesy Getty Images

(CNN) -- House Democratic leaders have settled on a legislative strategy to reopen the government, with votes expected on proposals just hours after the party takes control on Thursday, a Democratic aide confirms to CNN.

The Democrats plan to vote on a bipartisan package of six Senate spending bills and a stopgap measure to re-open the Department of Homeland Security at its current funding levels until February 8, the aide said. The temporary measure would maintain the current $1.3 billion in border security money, which can be used for fencing and repairs of current barriers.

"The President is using the government shutdown to try to force an expensive and ineffective wall upon the American people, but Democrats have offered two bills which separate the arguments over the wall from the government shutdown," incoming House Speaker Nancy Pelosi and Senate Minority Leader Chuck Schumer said Monday in a statement.

Yet as the shutdown moves through its 10th day, it is clear that the House Democrats' plan to take the first legislative action since the start of the shuttering of roughly a quarter of the federal government remains a nonstarter for Republicans, who still control the chamber on the other side of the US Capitol.

Senate Majority Leader Mitch McConnell, R-Kentucky, has made clear he will not move forward on any legislation until President Donald Trump signs off on it. Trump, for his part, hasn't wavered on his position that the fight is something he'd promised during the campaign -- and one he was telling advisers and friends he was willing to continue.

"I campaigned on Border Security, which you cannot have without a strong and powerful Wall," Trump tweeted Monday.

In an interview with Fox News on Monday, Trump said that he was ready to end the shutdown.

"I'm here, I'm ready to go. It's very important," he told Fox News' Pete Segseth. "A lot of people are looking to get their paycheck, and so I'm ready to go anytime they want."

One of the President's closest allies, Rep. Mark Meadows, a North Carolina Republican and chairman of the conservative House Freedom Caucus, said the House Democratic proposal "doesn't represent a serious attempt to secure our border or find a compromise."

Meadows, who speaks frequently with the President by phone, called the proposal "a nonstarter" and said it "will not be a legitimate answer to this impasse."

Pelosi and Schumer, citing the bipartisan nature of the full-year funding measures and the unanimous Senate support before the partial shutdown of a stopgap bill to fund the government to February 8, attempted to ramp up the rhetorical pressure on Republicans in advance of the House votes. They said Senate Republicans would be "complicit with President Trump" in continuing the shutdown if they choose not to move forward with the House Democratic plan.

"It would be the height of irresponsibility and political cynicism for Senate Republicans to now reject the same legislation they have already supported," the Democratic leaders said.

Democratic leaders mulled several proposals to re-open the government over the course of the last week before deciding to move forward with the full funding package. The move by House Democrats, however, is seen by Democratic aides as having the effect of jamming Senate Republicans and the White House as talks for a compromise agreement to reopen the government remain at an impasse.

Senate Democrats support the House Democratic plan, and Schumer, D-New York, and Pelosi, D-California, have been in constant contact and are on the same page on the plan, a senior Senate Democratic aide said. Democratic appropriators and leaders discussed the idea with Vermont Sen. Patrick Leahy, the top Democrat on the Senate Appropriations Committee, who urged them to move forward with the bipartisan Senate-approved measures.

Democrats believe it's smart to separate Department of Homeland Security funding -- and the wall fight -- from the other six bills because they think it puts Trump and the Republicans in the position of holding the other agencies and furloughed workers hostage for the wall, the aide said. Democrats believe pressure will mount on Republicans as the shutdown drags on, the aide said.

The negotiations on a deal to open the government have sat frozen for days, according to people involved, as lawmakers in the House and Senate have deserted the Capitol for the holidays and, with no votes scheduled, likely won't return until the start of the next Congress. That, according to several aides involved in the process, has been viewed as the unofficial moment talks may begin, but there still remains no clear pathway forward for an agreement.

For that to occur, aides in both parties acknowledge, one side is going to have to move off of positions they've proclaimed to be exceedingly comfortable in holding.

For Democrats, that means they will not put anything on the table beyond the current $1.3 billion for border security.

For the White House, the final position is more ambiguous: Vice President Mike Pence put a proposal for $2.5 billion for a combination border security and immigration priority funding on the table last week, but was rebuffed by Schumer. For his part, the President hasn't publicly endorsed that proposal or any other beyond his initial request for $5 billion.

But Trump has made clear, repeatedly on both Twitter and in private conversations, that he isn't backing down on a fight that has support from his base, top allies in the House Republican conference and top supporters in conservative commentary circles.

To some degree, both Democratic and Republican aides on Capitol Hill say, that has left them with little idea of what the President would actually support in a final deal.

"No idea," one senior GOP aide said. "We just need to let this play out a bit more at this point."