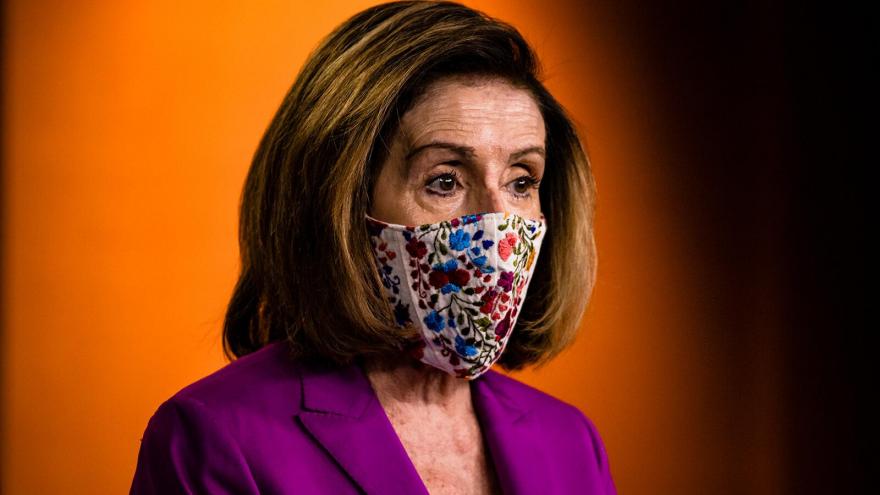 Speaker of the House Nancy Pelosi calls for the removal of President Donald Trump from office either by invocation of the 25th Amendment or Impeachment at the Capitol on Jan. 7, in Washington, DC.

(CNN) -- House Democrats plan to vote Wednesday to impeach President Donald Trump, House Majority Leader Steny Hoyer told Democrats on a caucus call Monday, setting up an impeachment vote one week after rioters incited by Trump overran Capitol police and breached some of the most secure areas of the US Capitol.

The House will vote Tuesday evening on a resolution urging Vice President Mike Pence to invoke the 25th Amendment to remove Trump from power, and then plan to vote Wednesday at 9 a.m. ET on the impeachment resolution, Hoyer said.

Democrats formally introduced their impeachment resolution Monday, charging Trump with "incitement of insurrection" as they race toward making him the first president in history to be impeached twice. Wednesday's vote underscores Democrats' fury toward Trump and his supporters after months of false rhetoric about the election being stolen whipped the President's most ardent followers into a deadly mob Wednesday that ransacked the Capitol, forced lawmakers to evacuate both the House and Senate -- and could have been worse.

The single impeachment article, which was introduced when the House gaveled into a brief pro-forma session Monday, points to Trump's repeated false claims that he won the election and his speech to the crowd on January 6 before the rioters breached the Capitol. It also cited Trump's call with the Georgia Republican secretary of state where the President urged him to "find" enough votes for Trump to win the state.

"In all this, President Trump gravely endangered the security of the United States and its institutions of Government," the resolution says. "He threatened the integrity of the democratic system, interfered with the peaceful transition of power, and imperiled a coequal branch of Government. He thereby betrayed his trust as President, to the manifest injury of the people of the United States."

The resolution, which was introduced by Democrats David Cicilline of Rhode Island, Jamie Raskin of Maryland and Ted Lieu of California, also cited the Constitution's 14th Amendment, noting that it "prohibits any person who has 'engaged in insurrection or rebellion against' the United States" from holding office.

House Speaker Nancy Pelosi told House Democrats on Sunday evening that the House would vote on impeachment this week unless Pence moves to invoke the 25th Amendment with a majority of the Cabinet to remove Trump from power.

The level of unity in the Democratic caucus is being driven by the visceral reaction to what happened on January 6, when lawmakers had to be evacuated from the House and Senate chambers with rioters banging on the chambers' doors as the insurrectionists tried to stop the counting of votes to affirm President-elect Joe Biden would become president on January 20. Five people were killed, including a US Capitol Police officer.

Still, House Democrats' race toward impeachment poses complications for the incoming Biden administration, as a Senate trial threatens to hamper the opening days of Biden's presidency. While some Democrats had suggested waiting to send the impeachment resolution to the Senate until after Biden's first 100 days in office, Hoyer and other top Democrats said Monday they wanted to do so immediately.

Because Senate Majority Leader Mitch McConnell has said he won't bring back the Senate from recess before January 19, that would push the trial into the beginning of the Biden administration.

At a press conference Monday, Biden acknowledged that impeachment could make it more difficult for him to get his Cabinet confirmed or pass another stimulus bill. He said he was hopeful that the Senate could spend half the day on nominations and legislations and the other half on the trial, and he was waiting to hear back from the Senate parliamentarian.

Regardless of the answer, it's clear Democrats are pushing forward with an impeachment vote. Cicilline said Monday "we have the numbers" already to impeach Trump, and he predicted some Republicans would vote for it too, unlike the House's December 2019 votes to impeach Trump.

"I expect that we'll have Republican support," Cicilline said. "I think it's urgent that the President be removed immediately."

Democrats on Monday sought to take up a resolution from Raskin urging Pence and the Cabinet to invoke the 25th Amendment. Hoyer asked for unanimous consent to bring up the resolution, but West Virginia GOP Rep. Alex Mooney objected to the request. Pelosi has said the Democrats will move to bring the resolution for a floor vote on Tuesday.

Pelosi said in an interview on CBS' "60 Minutes" that she liked the idea of invoking the 25th Amendment "because it gets rid of him," but explained, "one of the motivations people have for advocating for impeachment" is to prevent Trump from holding office again.

"There's strong support in the Congress for impeaching the President a second time," she said.

House Republicans have urged Democrats not to move forward with impeachment, arguing that such a move would be divisive in the face of Biden's calls for unity. House Minority Leader Kevin McCarthy is also holding a conference call with the GOP conference Monday, according to a source familiar.

Some House Republicans are privately discussing whether to censure Trump as a way to express their disapproval about the President's actions without going along with the Democratic effort to impeach him, according to several GOP sources. It's unclear, though, whether they will ever get a chance to vote on such a plan. Democratic leaders have shown no willingness so far to schedule a vote on anything short of impeachment.

"I suggested this would have bipartisan support and makes more sense since the inauguration is a week away," Rep. Don Bacon, a Nebraska Republican, said in a statement. "But the Democrats I've talked to were not very receptive."

It's unclear whether Republicans would vote for impeachment, though several are considering it. Several Republicans in districts Biden won say they would oppose it, including Bacon, who said last week that it "only exacerbates our divide and throws gas on the fire."

A spokesman for Iowa GOP Rep. Mariannette Miller-Meeks said she "believes that impeaching the President with only a few days left in his term would only further divide the American people and make it harder for President-Elect Joe Biden to unite the country."

Still, there's been little to slow momentum toward impeachment since Wednesday. Two Senate Republicans, Lisa Murkowski of Alaska and Pat Toomey of Pennsylvania, have called on Trump to resign in the wake of the insurrection at the Capitol.

In another sign that little short of Trump's resignation will stop impeachment, Senate Minority Leader Chuck Schumer told the Buffalo News Monday he won't let a Senate trial stall Biden's agenda, even if it would make it more difficult.

"We're going to have to do several things at once, but we got to move the agenda as well," Schumer said. "Yes, we've got to do both."