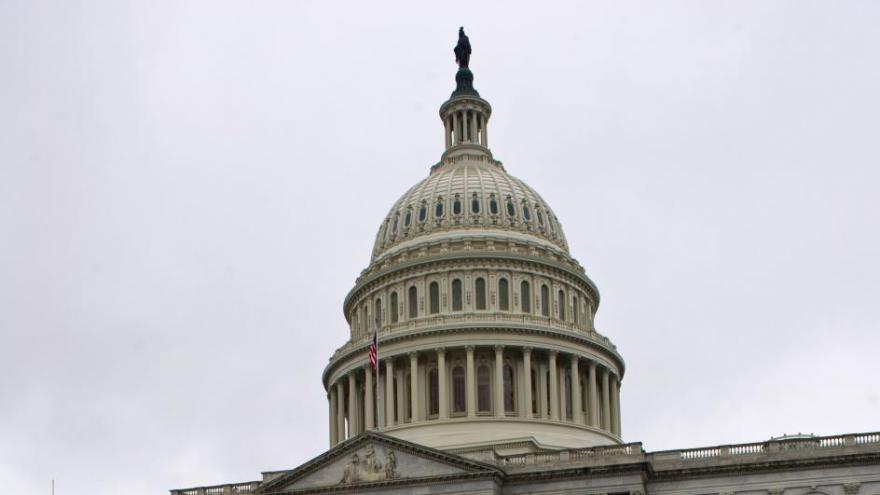 The House of Representatives is expected to vote March 9 to pass a massive $1.5 trillion government spending bill that will fund a wide range of priorities, including delivering desperately needed aid to Ukraine and additional money to fight Covid-19.

(CNN) -- The House of Representatives voted late Wednesday night to pass a massive government funding bill that includes $13.6 billion in desperately needed aid to Ukraine as the country fights back against Russia's deadly invasion.

Congress is racing the clock ahead of a Friday deadline when government funding is set to expire, but a shutdown is not expected, in part because many lawmakers are anxious to demonstrate support for Ukraine amid Russia's unprovoked assault on the country.

As part of the effort to prevent a shutdown, the House passed by voice vote on Wednesday night a stopgap bill to extend government funding through Tuesday.

The Senate is now expected to next take up and pass the short-term funding extension in addition to the broader spending bill so that congressional clerks have time to finish processing the text of the larger bill before sending it to President Joe Biden for his signature.

The sweeping government spending bill, known on Capitol Hill as the omnibus, is the product of months of negotiations, but the sprawling legislative text, which runs 2,741 pages, was not released until around 1:30 a.m. ET Wednesday, just hours before House leaders initially had planned to try to jam it through the chamber, leaving little time for lawmakers to review the measure.

The tight time frame had already frustrated some lawmakers -- and then House Democrats became embroiled in an intra-party fight Wednesday afternoon that threatened to derail the effort.

Democratic leaders had attempted to offset the cost of Covid relief in the package following widespread opposition from Republicans, who had argued there should be a full accounting of already allocated Covid money before extending further relief.

But a number of House Democrats revolted over a plan to use funds from the American Rescue Plan, a pandemic relief bill passed last year, as an offset in the new legislation. The provision would have impacted 30 states, and Democrats representing affected parts of the country argued it would hurt their states by taking away money they had been previously promised.

Ultimately, facing pushback from both sides, House Speaker Nancy Pelosi announced the Covid relief would be stripped from the government funding package.

Behind closed doors, Pelosi was angry at Democratic members who revolted over the Covid relief offsets — and the meetings were extremely tense, including with Rep. Mark Pocan of Wisconsin, a source familiar with the matter said.

Members felt blindsided by the deal that had been cut — and Pelosi was upset that they were forced to strip out new Covid relief money, the source said.

House Democrats later introduced a $15.6 billion stand-alone Covid relief bill, but it is expected to face Senate GOP opposition and a difficult time getting the 60 votes needed in that chamber to overcome a filibuster.

What's in the bill and challenges ahead in the Senate

The omnibus consists of a series of fiscal year 2022 appropriations bills to keep the government running in addition to emergency supplemental funding for Ukraine.

Of the $13.6 billion in aid to Ukraine, money is set aside for humanitarian, defense and economic assistance. The bill also includes provisions for sanctions enforcement.

The emergency aid package sets aside $4 billion to help refugees who have fled or were displaced within the country and increase the President's authority for defense equipment transfer to Ukraine and other allied nations to $3 billion, according to a fact sheet from the House Appropriations Committee.

Among a wide range of other provisions, the omnibus will also reauthorize the Violence Against Women Act and implement cybersecurity initiatives, Pelosi and Senate Majority Leader Chuck Schumer announced Wednesday.

When action turns to the Senate, there will also be challenges to swiftly pass the bill.

Any single senator could hold up quick passage of the bill and Schumer will need consent from all 100 senators to secure a time agreement to approve the measure before the Friday at midnight deadline.

Republican Sen. Mike Rounds of South Dakota said it was wrong for Democrats to jam the bill through quickly without adequate time to properly vet it.

"It's just dysfunctional to have something as large as this and then expect people to vote on it without having the opportunity to review it," he told CNN.

Asked if he would hold up speedy passage of the bill to give time to review the bill, Utah Republican Sen. Mike Lee said, "at a minimum, I want a vote on my amendment," referring to his measure to end vaccine mandates.

How a Democratic dispute held up the bill in the House

In a display of stark division within their party, a number of House Democrats openly expressed anger and concern on Wednesday over the offset proposal prior to the announcement that Covid relief would be eliminated from the package.

"This deal was cut behind closed doors. Members found out this morning. This is completely unacceptable," Democratic Rep. Angie Craig of Minnesota told CNN as she walked out of Pelosi's office. Minnesota was one of 30 states at risk of losing Covid relief funding.

"Our states have planned for these dollars," she told CNN, "We fought like tooth and nail to get these dollars home to our state governments. And now we're sitting here this morning talking about that being called back is the option."

In a statement, Missouri Democratic Rep. Cori Bush railed against the plan.

"I vehemently oppose efforts to snatch back the lifesaving resources we need to fully and equitably recover from this pandemic," she said.

Democratic lawmakers from states like Washington, Michigan, Ohio and others were upset because they believed the money from the American Rescue Plan that was being allocated as an offset was assistance promised to their states that they have yet to receive, a Democratic aide told CNN.

In a letter to Democrats explaining the offset, Pelosi wrote, "the Administration identified $8 billion from the American Rescue Plan programs that have expired with remaining funds available. Democrats were also able to ensure that the remaining payments to localities received no cuts in funding. Republicans continued to insist on state cuts, but we were able to ensure that all states receive at least 91 percent of the state funds that they expected to receive."

Michigan Rep. Debbie Dingell said her state could lose about $600 million in funding under the agreement.