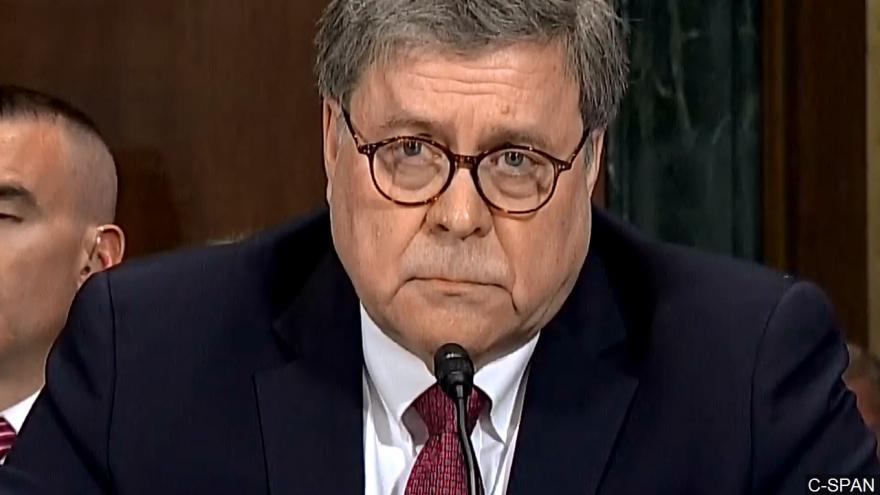 Attorney General William Barr testifies before the Senate for the first time since the Mueller Report release, Photo Date: 05/01/2019

WASHINGTON (AP) — A House committee voted Wednesday to hold two top Trump administration officials in contempt of Congress for failing to comply with subpoenas for documents related to a decision adding a citizenship question to the 2020 census.

The Democratic-controlled House Oversight Committee voted 24-15 to advance contempt measures against Attorney General William Barr and Commerce Secretary Wilbur Ross. The vote sends the measures to the full House, although congressional leaders could go to court to force compliance with the subpoenas under a resolution approved earlier this week.

The committee's action marks an escalation of Democratic efforts to use their House majority to aggressively investigate the inner workings of the Trump administration.

The White House asserted executive privilege on the matter earlier Wednesday. The Justice Department said officials had "engaged in good-faith efforts" to satisfy the committee's oversight needs and labeled the planned contempt vote "unnecessary and premature."

Democrats fear the citizenship question will reduce census participation in immigrant-heavy communities and result in a severe undercount of minority voters. They say they want specific documents to determine why Ross added the question to the 2020 census and contend the administration has declined to provide the documents despite repeated requests.

The oversight panel's chairman, Rep. Elijah Cummings of Maryland, said he was saddened by the vote, but called it an important step to assert Congress' constitutional authority to serve as a check on executive power.

"The census is something that is so very, very important," Cummings told reporters after the vote. "It goes to the bedrock of our very society and our democracy. We need to make sure the census is counted and counted accurately."

A spokeswoman for Barr said the committee's vote defied logic and undermined Congress' credibility with the American people.

"Despite the committee's political games, the department will remain focused on its critical work safeguarding the American people and upholding the rule of law," spokeswoman Kerri Kupec said.

Ross said in a statement that the committee's vote "demonstrated its scorn for the Constitution." He accused Democrats of "continually refusing to engage in the constitutionally mandated accommodation process."

The administration has turned over more than 17,000 of pages of documents and Ross testified for nearly seven hours in March. The Justice Department said two senior officials were interviewed by committee staff and said officials were working to produce tens of thousands of additional pages of relevant documents.

Cummings disputed that account and said most of the documents turned over to the committee had already been made public.

"We must protect the integrity of the census and we must stand up for Congress' authority under the Constitution to conduct meaningful oversight," Cummings said before Wednesday's vote.

The administration's refusal to turn over requested documents "does not appear to be an effort to engage in good-faith negotiations or accommodations," he said. "Instead, it appears to be another example of the administration's blanket defiance of Congress' constitutionally mandated responsibilities."

Trump has pledged to "fight all the subpoenas" issued by Congress and says he won't work on legislative priorities, such as infrastructure, until Congress halts investigations of his administration.

Ross told the committee the March 2018 decision to add the question was based on a Justice Department request to help it enforce the Voting Rights Act.

Computer files from North Carolina redistricting expert Tom Hofeller include detailed calculations that lay out gains Republicans would see in Texas by basing legislative districts on the number of voting-age citizens rather than the total population.

Hofeller, a Republican operative who died last year, said in the documents that GOP gains would be possible only if the census asked every household about its members' immigration status for the first time since 1950.

The Supreme Court is considering the citizenship question . A ruling is expected by the end of the month.

"I think it's totally ridiculous that we would have a census without asking" about citizenship, Trump said Wednesday, "but the Supreme Court is going to be ruling on it soon. I think when the census goes out ... you have the right to ask whether or not somebody is a citizen of the United States."

Some of the documents the committee is seeking are protected by attorney-client privilege and other confidential processes, Assistant Attorney General Stephen Boyd said. The president has made a "protective assertion" of executive privilege so the administration can fully review all the documents, he added.

Rep. Jamie Raskin, D-Md., said the administration has thwarted congressional efforts to obtain key documents and exercise legitimate oversight. "All we get from the administration is a middle finger" of defiance, Raskin said. "And that's not appropriate for the power of Congress."

It was not clear what happens next. A resolution approved by the House on Tuesday empowers committee chairs to sue top Trump administration officials to force compliance with congressional subpoenas without a vote of the full House, as long as they have approval from a bipartisan group of House leaders.

Action to hold Barr and Ross in contempt on the census issue would be a political blow but would not necessarily result in real punishment since the men are unlikely to go to jail or be arrested.