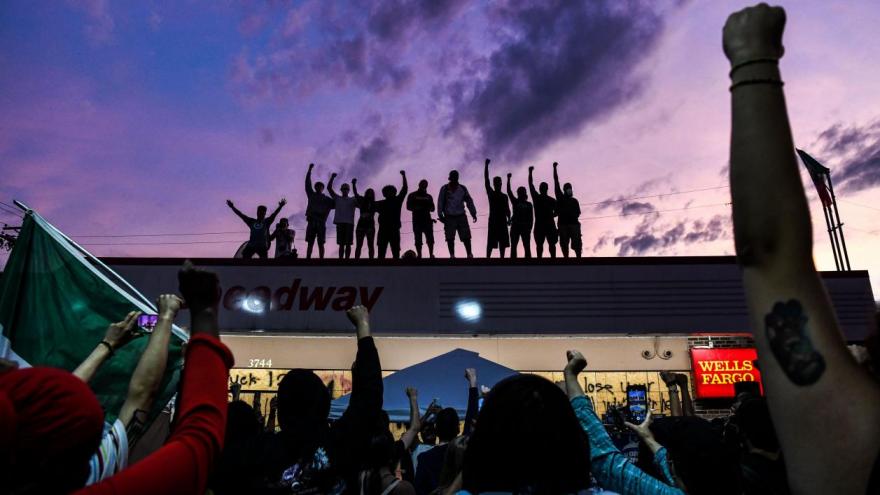 People shout slogans as they protest at a makeshift memorial in honour of George Floyd, on Tuesday, June 2, in Minneapolis.

(CNN) -- House Democrats are requesting additional information from the Department of Homeland Security after a drone flew to Minneapolis last Friday amid protests and department personnel were deployed to city streets to respond to the unrest, according to a letter sent to acting Homeland Security Secretary Chad Wolf on Friday.

"We write with grave concern about the use of Department of Homeland Security (DHS) resources—including drones and armed uniformed officers—to surveil and intimidate peaceful protesters who were exercising their First Amendment rights to protest the murder of George Floyd by the Minneapolis Police Department," says the letter, sent by the House Oversight Committee.

DHS has deployed resources nationwide, including in Washington, DC, to assist law enforcement responding to protests stemming from the death of Floyd.

"While the Department respects every American's right to protest peacefully, violence and civil unrest will not be tolerated," Wolf said in a statement Tuesday. "We will control the situation and protect the American people and the homeland at any cost."

Earlier this week, DHS deployed more than 600 personnel from a number of agencies in Washington to assist law enforcement. Among the agencies was US Customs and Border Protection, which last week had flown the drone to Minneapolis to provide live video to law enforcement on the ground, according to a senior CBP spokesperson.

The agency deployed the unmanned aircraft to help provide "situational awareness" for federal law enforcement partners in Minneapolis, according to the spokesperson. CBP would not specify which agency had asked for the aircraft to be deployed.

"The government seems to want to be able to be monitoring the crowds and monitoring what people are doing," said Jake Laperruque, senior counsel at the Project on Government Oversight, a nonpartisan government watchdog group. He said this kind of surveillance raises concerns about potential retribution and the chilling effect on protests.

In their letter to DHS on Friday, the Democratic-led committee requested additional information on the drone and the surveillance of protests, including a list of jurisdictions where DHS "conducted or assisted in conducting surveillance of any protests since Monday, May 25, 2020."

The committee also asked for a list of where personnel had been deployed "or plans to deploy" to assist with the response to protests.

The committee requested that the information be provided by next Thursday, as well as a briefing to committee staff by June 15.

"This Administration has undermined the First Amendment freedoms of Americans of all races who are rightfully protesting George Floyd's killing," the letter says. "The deployment of drones and officers to surveil protests is a gross abuse of authority and is particularly chilling when used against Americans who are protesting law enforcement brutality."