House passes bill to reopen IRS and other financial agencies, despite veto threat 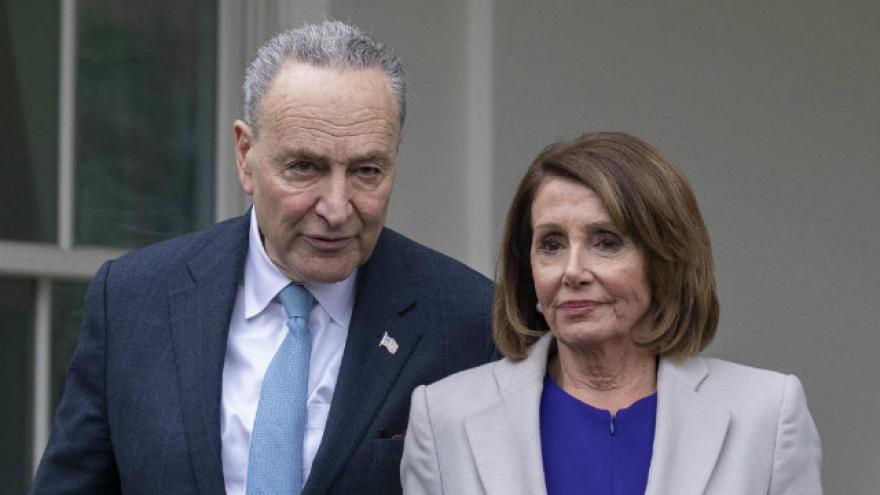 The Democratic-controlled House will make its next move Wednesday to reopen the government by voting on a measure that\'s expected to go nowhere in the Republican-controlled Senate -- a reflection of the continued standoff over how to end the partial shutdown. Photo courtesy Alex Edelman / Getty Images

(CNN) -- The House passed a financial services spending bill on Wednesday, the first of four appropriations bills the House will vote on this week in an attempt to reopen shuttered parts of government, despite the fact that the measures are not expected to go anywhere in the Senate and face a White House veto threat.

The stalemate is a reflection of the continued standoff over the ongoing government shutdown, which does not look like it will end anytime soon.

Each day this week, the House will vote on bills to fund shuttered parts of the government. The first spending bill voted on covered financial services, such as the Treasury Department and the IRS.

Later this week, the House will vote on bills covering national parks, and housing and transportation, as well as agriculture -- which administers the Supplemental Nutrition Assistance Program, more colloquially referred to as SNAP or food stamps.

But in a sign of how entrenched both sides are in the shutdown fight, the White House issued a veto threat on Wednesday afternoon for the spending bills that House Democrats are planning to take up ahead of a vote on the first bill in the series later in the day.

Prospects for any kind of a deal appeared even more unlikely on Wednesday after Trump declared that a meeting with congressional Democratic leaders Nancy Pelosi and Chuck Schumer to discuss the shutdown "a total waste of time."

The House already passed the same bills in a single appropriations package last week, and they were all passed by the Senate last year.

But Democrats will use the strategy of passing the spending bills individually to keep a spotlight on the issue with the shutdown now in its third week and with no end in sight. In their view, sending the individual bills to the Senate will ramp up pressure on Republicans, even though Senate Majority Leader Mitch McConnell has made it clear he won't take up anything without the President's blessing.

Rep. Patrick McHenry of North Carolina, the top Republican on the Financial Services Committee, argued the vote Wednesday is "a political stunt" since the House already voted on the bill, and he called it a "second week charade."

Some GOP senators have already started expressing frustration with the stalled negotiations and appear eager to reopen the remaining parts of government, with continued talks over border security afterward.

"All of us are discussing plans and possible compromises in ending the shutdown," Collins told CNN. "That's a common goal that everyone you saw talking there shares."

The President and vice president continued making their case to Senate Republicans at a Capitol Hill lunch Wednesday, urging the conference to stand together in the President's push to get $5.7 billion for the border wall.

Trump was asked by reporters at the Capitol if any Republican lawmakers said they wanted him to pursue a different strategy and reopen the government.

"A couple talked about strategy. A couple," he responded, before adding, "but they're with us all the way."

Hours before the White House meeting, both sides remained dug in. Members and leaders of both parties offered different interpretations of the President's prime-time address Tuesday night and continued to throw shots at each other over who's to blame for the shutdown.

"In no way did the President's speech last night make a persuasive or even a new case for an exorbitantly expensive border wall, a wall that the President guaranteed would be paid by Mexico," Schumer said on the Senate floor Wednesday.

Democratic Rep. Raja Krishnamoorthi of Illinois said the President's speech was "completely inconsistent with reality," arguing it's something he would expect to hear at a rally, not in the Oval Office.

Meanwhile, Rep. Steve Scalise, the Republican whip, argued Democrats who say the situation at the border is a "fabricated crisis" are operating in a "denial of reality."

"It's an insult to the families of all of those victims of crime (and) the opioid crisis, which is so real in almost every community in this country," he told reporters.

"This is the challenge we have: Democrats who say, 'I can't talk about anything until the government is open,'" he added.

Asked if there will be a point at which Democrats need to compromise on the border wall, House Speaker Nancy Pelosi argued Democrats are already compromising by bringing to the floor spending bills that were passed by Senate Republicans.

It's the White House, she said, that keeps moving "the goalposts."

"Every time they come with a proposal, they walk away from it," she told reporters in a news conference on Capitol Hill with furloughed workers standing in the background. "Pretty soon these goalposts won't even be in the stadium."

For his part, Trump was unflinching Wednesday in his position, explaining why he won't agree to reopen parts of government without securing funding for a border wall first.

"Right now if I did something that was foolish like gave up on border security, the first ones that would hit me are my senators. They'd be angry at me," Trump told reporters, expressing publicly what he's told lawmakers and allies over the past several weeks.

He went on, saying "The second ones (to hit me) would be the House and the third ones would be, frankly, my base and a lot of Republicans out there and a lot of Democrats that want to see border security."