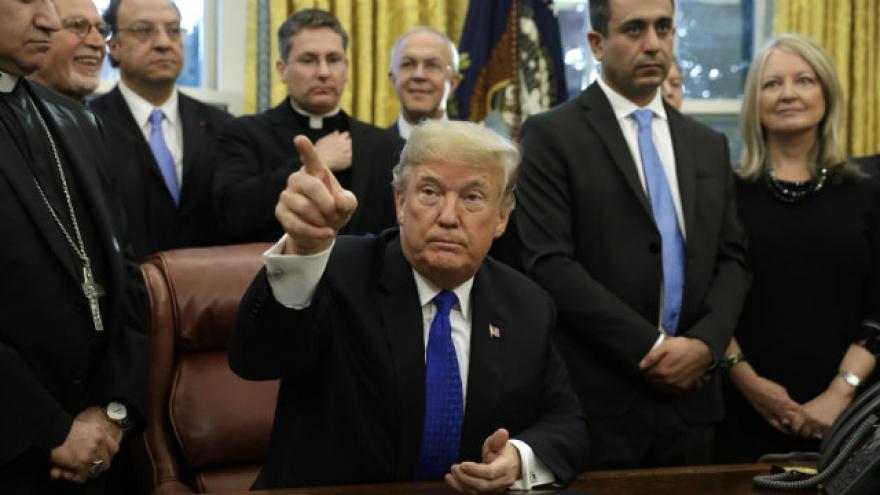 U.S. President Donald Trump takes a question from a member of the media after signing bill H.R. 390, the Iraq and Syria Genocide Relief and Accountability Act of 2018, in the Oval Office of the White House in Washington, D.C., U.S., on Tuesday, Dec. 11, 2018. Photo courtesy Yuri Gripas / Bloomberg via Getty Images

(CNN) -- With Washington a little more than 24 hours away from a partial government shutdown, the House of Representatives on Thursday passed a spending bill that includes an additional $5 billion for President Donald Trump's long-promised border wall. The vote was 217-185.

The $5 billion is in line with what the President has requested of Congress, but passage of the measure significantly raises the chances that the government will at least partially shut down at the end of the week.

That's because the bill next heads to the Senate, where it is expected to be dead on arrival due to opposition over the border wall money.

Democrats have already made clear they will not support $5 billion for the wall, and any spending measure would need bipartisan support to pass in the Senate.

Late Thursday night, Trump tweeted: "Thank you to our GREAT Republican Members of Congress for your VOTE to fund Border Security and the Wall. The final numbers were 217-185 and many have said that the enthusiasm was greater than they have ever seen before. So proud of you all. Now on to the Senate!"

Minutes later, he added: "Soon to be Speaker Nancy Pelosi said, last week live from the Oval Office, that the Republicans didn't have the votes for Border Security. Today the House Republicans voted and won, 217-185. Nancy does not have to apologize. All I want is GREAT BORDER SECURITY!"

The question now is whether a partial shutdown can still be averted. Funding will expire for several key government agencies at midnight on Friday. If the deadline is not extended, those agencies will shutter just days before Christmas.

Just a day ago, lawmakers had appeared on track to stave off a shutdown after the Senate passed its stopgap funding bill with top congressional Republicans signaling that they expected the President to sign the measure.

But the outlook changed drastically on Thursday as Trump ratcheted up his rhetoric and suggested again that he is not willing to accept anything less than his $5 billion demand.

House GOP leaders had emerged from a meeting with the President at the White House earlier in the day saying that Trump had told them he would not accept the stopgap measure passed by the Senate, which did not include the border wall funding he wanted.

That news threw many lawmakers into a tailspin as confusion and uncertainty over what would happen next dominated the day on Capitol Hill.

Rep. Mark Meadows, the chairman of the House Freedom Caucus, told CNN earlier in the day on Thursday that state of play on the spending bill is "very fluid right now."

It is widely expected that the measure will be unable to pass in the Senate, however, given its allocation for border wall funding.

Senate Majority Leader Mitch McConnell's proposal that passed the Senate the day before had the backing of the top congressional Democratic leaders Nancy Pelosi and Chuck Schumer, and top congressional Republicans had indicated on Wednesday they were optimistic that the President would sign the measure.

Pelosi, however, argued during a press conference on Thursday that the situation was descending into a "meltdown" among Republicans. While she expressed openness to additional funds for issues like disaster aid, she said wall funding would be a dealbreaker for Democrats.

"We'll see what they come up with in terms of disaster assistance, we'll see. But in terms of wall funding, that's a non-starter."

A House GOP conference meeting earlier in the day was a "strong rebuke" against the short-term spending bill passed by the Senate, according to North Carolina Republican Rep. Mark Walker. "There wasn't any ambiguity in the room today," Walker told CNN.

"We've got to stay here and get this job done and get border security passed," Walker said. "The Senate's voice vote on the CR was strongly rejected by the conference this morning."

The North Carolina Republican said one member who hadn't spoken in the conference in eight years stood up to speak Thursday and that Rep. Virginia Foxx's husband called her from back home to say you've got to get the wall done. "It wasn't just one group or one caucus; It was across the board," Walker said.

The Senate-passed measure faces opposition from a broad group of conservatives. Members of the House Freedom Caucus and other conservative allies of the President spoke on the House floor Wednesday night, urging Trump not to abandon new money for border wall funding.

Jordan, speaking on the floor, blasted the idea of postponing another spending bill fight to February, when Democrats will hold the majority in the House.

"You've got to be kidding me, really? I mean February 8th? When Nancy Pelosi is speaker? I'm supposed to believe, we're supposed to believe that we're then going to build the border security wall and keep our promise from the 2016 campaign? No way!" Jordan said.