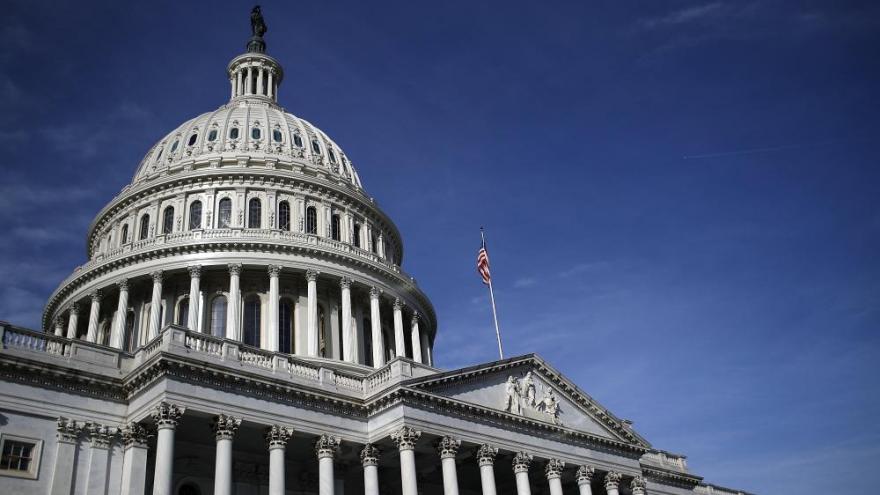 (CNN) -- The House of Representatives on Thursday passed a sweeping two-year budget and debt limit deal that would stave off the looming threat of a potential default on US debt and prevent automatic spending cuts to domestic and military funding.

The agreement, negotiated between congressional leaders and the Trump administration, represents a significant bipartisan compromise. While it is facing pushback from some conservatives, it appears to be on track to pass both chambers of Congress and be signed into law by President Donald Trump. It will next go to the Senate, where it is expected to get a vote sometime next week.

After the House voted to pass the budget and debt limit deal, Republican Rep. Thomas Massie of Kentucky took to the floor in protest, offering an amendment to change the title of the bill to "A bill to kick the can down the road and for other purposes."

The announcement was met with a mixture of boos and applause inside the gallery.

Conservatives have voiced objections to the bill for failing to rein in spending, but Massie's suggestion was voted down with 47 yeas and a resounding 384 nays. It did win some bipartisan support, however: 5 Democrats voted in favor.

The progressive "squad" -- freshmen Reps. Ilhan Omar of Minnesota, Ayanna Pressley of Massachusetts, Alexandria Ocasio-Cortez of New York and Rashida Tlaib of Michigan -- were split over the budget deal. Omar and Pressley voted against it, while Ocasio-Cortez and Tlaib voted for it.

Trump announced the deal had been struck on Monday and issued a full-throated endorsement of it on Tuesday, tweeting, "Budget Deal gives great victories to our Military and Vets," and saying, "Republicans and Democrats in Congress need to act ASAP and support this deal."

Of course, until the agreement is signed into law, it's not a done deal. Ahead of the last partial government shutdown, the President appeared on track to back a spending deal only to later reject it amid a fight for funding over his long-promised border wall.

The Senate will be in session next week, giving the upper chamber additional time to vote on the deal after the House vote and send the measure to the President's desk.

Since the deal is a compromise, neither Democrats nor Republicans view it as ideal and there has been pushback from some factions on Capitol Hill, but so far that does not seem like it will be enough to prevent the measure from passing both chambers of Congress and being signed by Trump.

The conservative House Freedom Caucus came out against the deal earlier in the week, citing increasing US debt and saying the plan would have "no serious offsets" in a statement posted to Twitter.

But House Republican leadership is whipping votes in support of the agreement. And while all sides acknowledge it is a compromise, Democrats are largely applauding that it will allow for investment in domestic spending priorities, while many Republicans are highlighting the investment it will make in defense.

Key House progressive leaders issued a statement Wednesday praising elements of the deal and suggesting they were not planning to put up a fight against it.

Congressional Progressive Caucus co-chairs Mark Pocan of Wisconsin and Pramila Jayapal of Washington state said in a statement that the agreement is "not a perfect deal by any means" but that "With this agreement, we can finally begin to end this harmful chapter of self-inflicted austerity," adding that "it will allow for major, long-overdue investments in domestic priorities -- including housing assistance, food aid, education and job training."