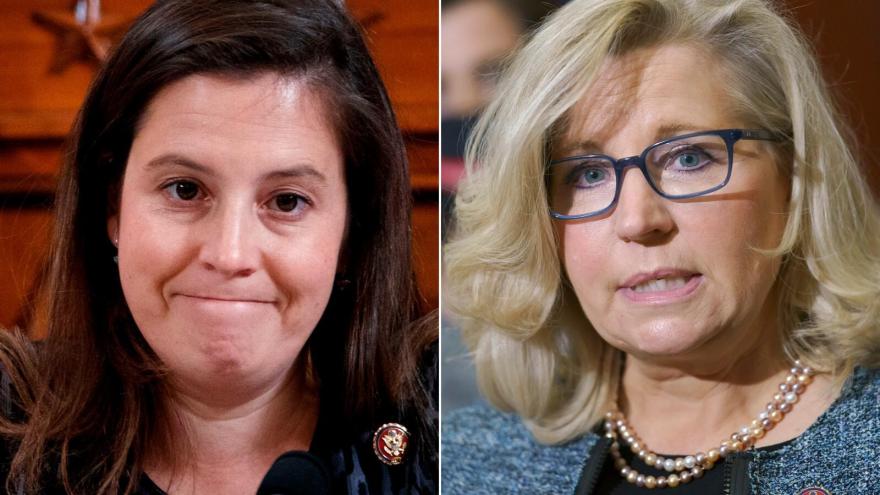 House Republicans are expected to vote on May 14 to elevate Rep. Elise Stefanik to the No. 3 leadership position of conference chair after ousting Rep. Liz Cheney from the role.

(CNN) -- House Republicans voted on Friday to elevate Rep. Elise Stefanik to the No. 3 leadership position of conference chair after ousting Rep. Liz Cheney from the role because she repeatedly called out former President Donald Trump's "Big Lie" that the 2020 election was stolen.

Stefanik, a high-profile Trump defender, faced a conservative challenger -- GOP Rep. Chip Roy -- but his candidacy was viewed as a long-shot, and the New York congresswoman had the backing of House GOP leader Kevin McCarthy, Minority Whip Steve Scalise and Trump. The final result was 134 votes for Stefanik and 46 for Roy, according to multiple sources in the room.

The congresswoman said in a statement after the vote that she is "honored and humbled" to be elected to the leadership post. "House Republicans are united in our focus to fight on behalf of the American people to save our country from the radical Socialist Democrat agenda," she said.

Stefanik's rise within the ranks of House GOP leadership and Cheney's removal starkly underscores the Republican Party's entrenched loyalty to the former President and the limited extent to which it is willing to tolerate dissent even after Trump's election lies incited a deadly attack on the US Capitol on January 6.

Aides close to the race also told CNN that Stefanik's quick rise was a emblematic of the congresswoman's own ambitions.

"She just outhustled everyone," one senior GOP aide told CNN.

Amid Trump's false claims over voter fraud, Stefanik supported an objection during the Electoral College vote count to affirm President Joe Biden's win. She also signed on in support of an amicus brief backing a lawsuit from Texas to the Supreme Court that sought to overturn the results of the election in several states.

Trump stood by Stefanik in her run for the leadership post and weighed in on Roy's late entry into the race Thursday evening with a statement slamming the congressman and reiterating his support for the congresswoman.

"Can't imagine Republican House Members would go with Chip Roy -- he has not done a great job, and will probably be successfully primaried in his own district. I support Elise, by far, over Chip!" he said.

Stefanik has made a pitch to House Republicans that she will help deliver on a message of unity and united opposition to Democrats in Congress and in the White House as the party works to win back the House majority in 2022.

The congresswoman has faced pushback, however, from some conservative House Republicans.

Stefanik represents a district that pivoted in the past from voting for former President Barack Obama to Trump and she has long been known on Capitol Hill as a more moderate Republican. And while the congresswoman has made a name for herself as an ardent Trump supporter in recent years, that wasn't always the case.

In 2015, 2016 and the early days of his term in office, she criticized Trump on a range of issues from his incendiary comments about Muslims and women to his signature policy positions, such as overhauling NATO, building a US-Mexico border wall and having stronger cooperation with Russia.

When House Democrats moved to impeach Trump for the first time in 2019, however, Stefanik emerged as one of the President's most outspoken defenders, taking on Democrats and earning Trump's praise as "a new Republican star."

Cheney, on the other hand, is known as a more conservative Republican, but she has also become a major Trump critic. She voted to impeach Trump for inciting the January 6 attack on the Capitol and has continued to speak out against his election lies.

House Republicans formally ousted Cheney from her leadership post in a voice vote on Wednesday. Before the vote, the Wyoming Republican called out Trump and other Republicans who aided his efforts to overturn his loss and warned, "we cannot let the former president drag us backward and make us complicit in his efforts to unravel our democracy."

Stefanik said Wednesday afternoon she "absolutely" has enough votes to secure her election to the position, even if someone else decides to jump in the race. Roy publicly announced his intention to run Thursday.

The House Freedom Caucus, a group of Trump-aligned far-right Republicans held a forum with Stefanik on Wednesday evening, which the New York congresswoman called "a great conversation" after it concluded.

"My message was I'm focused on unifying the conference and beating Democrats and we have an opportunity to do that, that is historic in beating the most radical socialist agenda in this country," Stefanik said after the meeting. She did not answer when asked if she had won over the support of the caucus.

Stefanik also met this week with the conservative Republican Study Committee in her efforts to win over the conference. That group is led by Jim Banks, an Indiana Republican who was seen early on as a potential contender in the race, but never entered.

Stefanik has signaled to some colleagues that she plans to stay in leadership and as chair of the House GOP Conference only through 2022, wanting to pursue the top GOP job on the House Education and Labor Committee next Congress, according to a source with direct knowledge of the talks, an assurance that could help assuage concerns from any lawmakers reluctant to support her.

This story and headline have updated with additional developments Friday.