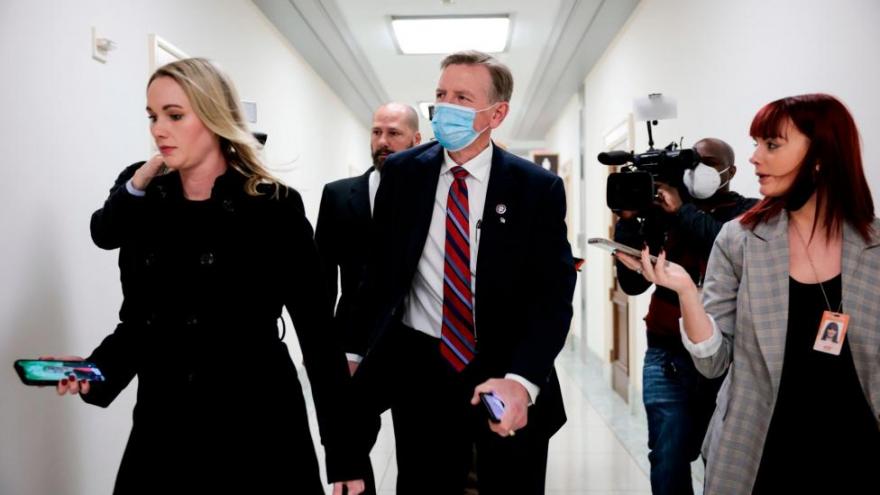 (CNN) -- The House is set to vote Wednesday to approve a resolution that censures Rep. Paul Gosar and strips him of his two committee assignments, which if passed would be the first time a sitting House member will be censured in more than 10 years.

Gosar later took down the video after facing criticism but did not apologize, and House Democrats have made clear they believe he must face significant consequences for his actions. The episode underscores the rising tensions and deepening distrust between Democrats and Republicans in Congress.

A censure resolution is the most severe form of punishment in the House, and stripping a member of committee assignments deprives them of a powerful platform to influence legislation and give voice to constituent priorities.

The resolution set for a vote will remove Gosar from House Oversight and Reform Committee, which Ocasio-Cortez also serves on, and the Natural Resources Committee.

How the censure vote is expected to unfold

Approval of a censure resolution would represent a dramatic moment on the House floor. The last time a member was censured was in 2010, when former Democratic Rep. Charlie Rangel of New York was censured by his own party over various ethics violations.

However, Gosar could refuse to show up. If that's the case, Democrats could still proceed with the censure resolution without him present, even though he is required to be there.

The move to censure Gosar follows a lack of action from Republican leadership in the House. House Minority Leader Kevin McCarthy, who had not commented publicly on the Gosar episode until this week, has said that he had called the Arizona Republican after the tweet, who then deleted it, but he did not explicitly condemn Gosar's behavior.

McCarthy said Gosar had explained his actions during a closed-door conference meeting on Tuesday morning, and his explanation was well received in the conference, according to attendees.

"He didn't see it before it posted. It was not his intent to show any harm," McCarthy told reporters. "What I said to conference was (we) cannot accept any action or showing of a violence to another member."

Amid a backlash against the video, the congressman issued a statement on the video, saying that it "was not meant to depict any harm or violence against anyone portrayed" and calling it "a symbolic portrayal of a fight over immigration policy."

Ocasio-Cortez pushed back on Gosar's claims that he did not see the violence in the widely condemned video he tweeted last week.

"If he was telling the truth, he would have apologized by now, and it's been well over a week," Ocasio-Cortez said on Tuesday. "He not only has not apologized, he not only has not made any sort of contact or outreach, neither he nor the Republican leader of the party. But he's also doubled down by saying that I am somehow, I'm somehow a representative of undocumented people and that somehow is deserving a characteristic of violence."

House Speaker Nancy Pelosi said on Wednesday that Gosar could face criminal liability for the video.

"I think threatening the lives of anyone, not just a member of Congress and certainly the President of the United States, should warrant law enforcement attention," Pelosi said.

House Majority Leader Steny Hoyer told reporters on Tuesday that Democrats are not worried about the precedent the action would set if Republicans were to take back the majority next Congress.

"If precedent was set, it was set in the Greene case," Hoyer said, referring to Democrats stripping GOP Rep. Marjorie Taylor Greene of Georgia of her committee assignments following upheaval after her past incendiary comments and apparent support of violence against Democrats surfaced.

"Setting it twice is not going to make a difference I don't think," Hoyer said. "And I know there's comments that we'll do it to you. I don't know, frankly, of any incident that is analogous on our side of the aisle. In any event, if there were an analogous event action ought to be taken Democratic not."

Gosar entered his office on Capitol Hill on Wednesday ahead of the vote, but didn't take any questions. He also has not participated in the two committees meeting Wednesday morning that the House plans to vote to strip him of later.

Ocasio-Cortez told reporters on Monday that she believes punishing Gosar is something House Democratic leadership is taking "very seriously."

"I do believe it's important for there to be a material consequence," Ocasio-Cortez said of Gosar's behavior.