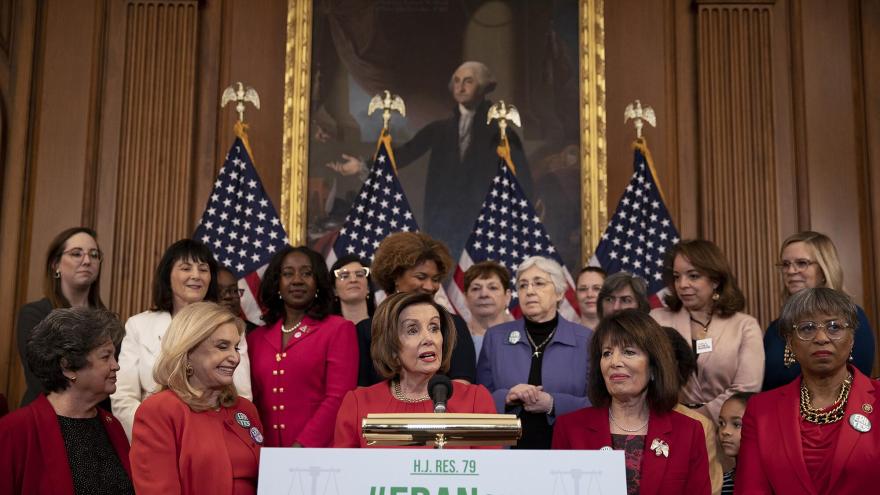 The House is pushing forward with a joint resolution to remove a deadline for states to ratify the Equal Rights Amendment, after a recent federal court ruling said the deadline for the ERA expired long ago.

(CNN) -- The House on Wednesday passed a joint resolution that would remove a deadline for states to ratify the Equal Rights Amendment, after a recent federal court ruling said the deadline for the ERA expired long ago.

Proponents of the ERA believe the court ruling signaled that it's now up to Congress to validate their argument that the ERA has already been ratified and should be published as the Constitution's 28th Amendment. But opponents say Congress cannot retroactively change its imposed deadline decades after it expired and blast the vote as a political stunt.

The final vote was 222-204. Four Republicans joined Democrats to approve the resolution that was introduced by Democratic Rep. Jackie Speier and Republican Rep. Tom Reed. The resolution now heads to the Senate where it faces a tougher path, like many other top Democratic priorities given the chamber's 50-50 partisan split.

The House is also planning a vote Wednesday to reauthorize the Violence Against Women Act, a landmark bill championed by President Joe Biden that expired in 2018.

The vote during Women's History Month is a symbolic step reaffirming supporters' commitment to the ERA -- which they have fought for decades to add to the Constitution -- given that the House approved the same resolution last session. But many of the same legal questions surrounding the ERA remain unanswered.

The Democratic-led House had approved the resolution largely on a party-line vote during the last session of Congress.

Democratic Sen. Ben Cardin of Maryland, who introduced the Senate joint resolution with Republican Sen. Lisa Murkowski of Alaska, has projected optimism and said during a virtual town hall hosted by the ERA Coalition late last month that "this looks like the year that we can get it done."

Cardin said that he and Murkowski were reaching out to GOP members to try to shore up support.

His spokesperson Sue Walitsky told CNN that Cardin "continues to work with leadership to find the most advantageous time for Senate consideration."

But Cardin and Murkowski would need the support of 10 Republican senators to end a potential filibuster of the resolution. The resolution, given that it's part of the constitutional amendment process, would not require Biden's signature.

Opponents to the ERA, like National Right to Life, say the deadline to pass the amendment expired decades ago and view the joint resolutions in Congress as unconstitutional. They say the ERA would expand access to abortion and be interpreted to nullify federal and state restrictions.

Congress originally passed the ERA in 1972 with the necessary two-thirds approval required by the Constitution. Proponents and opponents compromised by adding a seven-year deadline for states to ratify the ERA.

Under Article V of the Constitution, three-fourths of the states -- or 38 states -- are required to ratify constitutional amendments. Realizing the threshold would not be met by 1979, Congress extended the deadline to 1982. But by then, only 35 states had signed off on the ERA -- with five of those states rescinding their support of the ERA within that time.

In recent years, Illinois, Nevada, and Virginia approved the ERA, with Virginia claiming to be the 38th state -- and final state -- to ratify the amendment in 2020. And currently, Republican lawmakers in North Dakota's legislature are sponsoring a resolution that would declare the state's 1975 ratification of the ERA was only valid through 1979, which ERA proponents argue is an attempt to rescind North Dakota's ratification.

While ERA opponents point to the five states' rescissions as part of the reason why the ERA is not ratified, advocates argue that state legislatures cannot rescind ratifications they've already passed.

Last year, proponents celebrated Virginia's ratification of the ERA as a milestone, believing that the archivist of the United States only needs to publish the amendment. The ERA includes language that it should take effect two years after ratification and supporters say that the clock started when Virginia ratified in January 2020.

But the Justice Department's Office of Legal Counsel had issued an opinion in January 2020 that the deadline to ratify has expired and the amendment is "no longer pending before the states." The opinion effectively blocked the US archivist from taking action after Virginia ratified the ERA.

Douglas Johnson, the National Right to Life's senior policy adviser, has maintained that the idea from advocates that the ERA is ratified or close to ratification is "political theater" and that "legally, this is not a close call."

"The Constitution does not empower Congress to employ time travel to resuscitate a 42-year-dead amendment," Johnson told CNN, adding that the upcoming votes in Congress are part of a "political-pressure campaign to intimidate the federal courts into permitting them to air-drop the long-expired ERA into the Constitution."

He also criticized Congress for trying to push the resolution using a "truncated process." He argued that the resolution's sponsors contradict themselves by arguing that they can get this passed with a simple majority but cite Article V, which requires an amendment get two-thirds passage, as to what gives Congress the constitutional authority to do so.

Speier's office replied that the two-thirds vote under Article V is "only necessary for passing new amendments for ratification to the states, not for changing or removing the deadline" and "that when Congress extended the deadline in 1979, it did so with a simple majority vote."

Johnson argued that whether by majority or two-thirds, "Congress lacks power to reach out and amend a constitutional amendment that it has already submitted to the states -- that would be a bait-and-switch."

Katherine Franke, faculty director of the ERA Project at Columbia Law School, said during an event Monday that even if Congress were to pass the resolutions declaring the ERA to have been completed "that will not put an end to the debates" and to expect litigation challenging that process.

Franke said key open legal questions include whether Congress has the power to change or lift its deadline retroactively, whether courts have jurisdiction over the ratification process itself, and whether states have the power to rescind an earlier ratification of an amendment.

Last year, Virginia, Nevada and Illinois sued the US archivist in an attempt to get him to "carry out his statutory duty of recognizing the complete and final adoption" of the ERA.

In their complaint, the state's Democratic attorneys general argued that the ERA deadline has not lapsed for the amendment, because the time frame is not included in the amendment's body text but in the preamble, and that states' rescinded ratifications are "constitutionally unauthorized and without legal effect."

This month, a federal district judge dismissed the case and ruled that the deadline to ratify the ERA "expired long ago" and that the three states' recent ratifications of the ERA arrived "too late to count." The court, however, did not weigh in on states' recissions or whether Congress's extension of the ratification deadline was constitutional.

Virginia attorney general Mark Herring said on Twitter that he will consider an appeal among other options.

Herring added that he welcomes support from the Biden administration and Congress "in ensuring that this amendment is recognized as part of the Constitution."

University of Virginia law professor Saikrishna Prakash, who supports the ERA but believes the deadline has lapsed, called the ruling a "complete defeat for the States bringing the suit." He added that the ruling "will not be the only, or final, word" about the ERA and "Congress need not accept it as gospel."

But City University of New York professor Julie Suk, who is an advisory council member for the ERA Project, said in a statement last week that the ruling shows the "ball is clearly in Congress's court."

"In concluding that the seven-year ratification deadline was effective, the decision explicitly leaves open the issue of whether Congress can now remove the deadline and validate the late ratifications," said Suk, who filed an amicus brief in the litigation. "The court's reasoning clearly affirms Congress's role as the director of the Article V amendment process."

Speier, a California Democrat, on Twitter argued that the ruling "raises the urgency to take up my bill to strike the ERA deadline."

"The Constitution is silent on amendment deadlines (and) it's bizarre that we would certify the 27th Amendment 200 years after it was proposed but women's rights get short shrift," she wrote. "There can be no expiration date on equality. Congress must pass my resolution, H.J.Res.17, to clarify any legal ambiguities and ensure gender equity is bedrock in the Constitution."

It's unclear how the Justice Department under the Biden administration will approach legal questions surrounding the ERA.

Biden's campaign website had stated that Biden would "proudly advocate for Congress to recognize that 3/4th of states have ratified the amendment and take action so our Constitution makes clear that any government-related discrimination against women is unconstitutional."

Newly sworn-in Attorney General Merrick Garland could overrule the OLC opinion from last January or the OLC could issue a new memorandum about the deadline, legal experts told CNN.

Garland told the Senate Judiciary Committee in written answers last month that "any opinions or legal advice I might give on this subject would be based solely on the law, and not on any other consideration."

Biden has also vowed that the Justice Department will operate independently, but he could direct the archivist to publish the ERA.

During the town hall with advocates last month, ERA Coalition Legal Task Force chair Linda Coberly said that even if the archivist were to publish the ERA, it "doesn't by itself resolve the legal issues that someone's (going to) eventually have to resolve." She added that the lawsuit and disputes in the courts "will almost certainly continue."

Meanwhile, Maloney has reintroduced a resolution in Congress that would restart the amendment process for the ERA.

CLARIFICATION: This story has been updated to clarify the resolution that Republican lawmakers in North Dakota are sponsoring would declare the state's 1975 ratification of the ERA was only valid through 1979.

This story has been updated to reflect passage of the resolution removing the deadline to ratify the ERA.