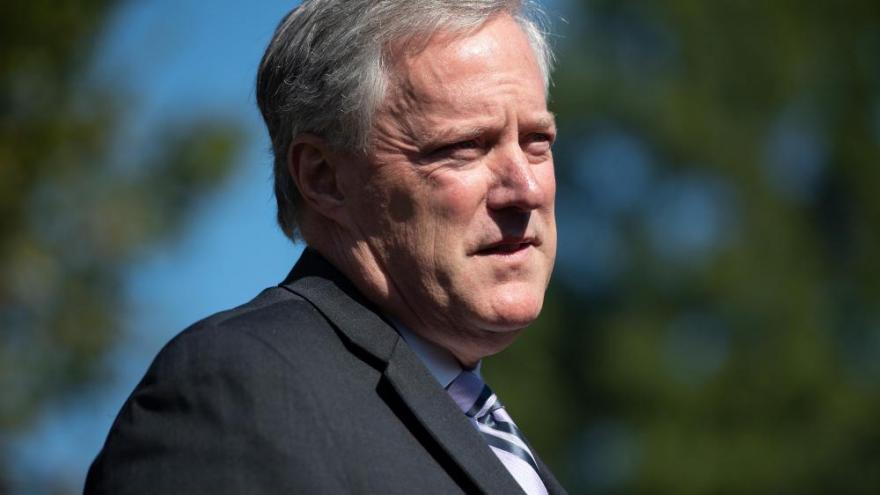 The House is set to vote on whether former White House chief of staff Mark Meadows should be referred to the Department of Justice on criminal charges for failing to appear for a deposition with the select committee investigating the January 6 attack.

(CNN) -- The Democratic-controlled House voted Tuesday night to recommend that the Department of Justice pursue criminal charges against former White House chief of staff Mark Meadows for failing to appear for a deposition with the select committee investigating the January 6 attack on the US Capitol.

The vote was 222-208. Two Republicans who sit on the select committee, Reps. Liz Cheney of Wyoming and Adam Kinzinger of Illinois, voted with Democrats in favor of the referral.

On Monday, the House select committee unanimously voted in favor of holding Meadows in contempt of Congress and now it is up to the Justice Department to decide if it will pursue criminal charges against ex-President Donald Trump's former chief of staff.

The vote, despite being pushed through by a Democratic majority, marks a significant moment in the January 6 investigation given Meadows' role as Trump's chief of staff and his intimate knowledge of efforts to overturn the 2020 election. Meadows is the second official to face such a referral from the panel. The committee approved a criminal contempt report against Trump ally Steve Bannon in October after he refused to comply with a subpoena deadline.

Meadows has consistently insisted he wants to shield some of his conversations with the former President under claims of executive privilege but has already handed over thousands of documents which the panel says only adds to the need for him to testify.

But so far, Meadows has refused to do so and his defiance is at the core of Tuesday's vote to refer him on criminal charges.

"The select committee's report referring Mr. Meadows for criminal contempt charges is clear and compelling," Committee Chairman Bennie Thompson, a Democrat from Mississippi, said on Tuesday. "As White House chief of staff, Mr. Meadows played a role in or was witness to key events leading up to and including the January 6th assault on the United States Capitol."

Meadows' attorney issued a new statement Tuesday ahead of the full House vote saying that his client is still cooperating with the committee in some ways, but maintained he cannot be compelled to appear for questioning as he is not "licensed to waive Executive Privilege" claimed by Trump.

Meadows "has fully cooperated as to documents in his possession that are not privileged and has sought various means to provide other information while continuing to honor the former president's privilege claims," his attorney George J. Terwilliger III said in a statement.

Republican Rep. Liz Cheney of Wyoming, the vice chair of the select committee, said Tuesday that Meadows had received numerous text messages urging Trump to take action to stop the riot that he has produced without any privilege claim.

Later Tuesday, Thompson told CNN the committee will "make a decision within a week or so when to release" the names of the authors of the texts to Meadows on January 6 after members referenced several messages exchanged between the former White House chief of staff and lawmakers as the riot unfolded.

Thompson said committee members felt it was "important" to put the content out before releasing the names.

"Then we will do our own review on the committee as to if and when we will release them," Thompson said. "We will do it. I can't tell you exactly when that will be."

Asked if there were any senators who were texting Meadows on January 6, Thompson revealed: "At this point, it is just House members."

He also said the panel would likely notify the GOP members before it takes any action.

The committee was ready to move forward with holding former Department of Justice official Jeffrey Clark in contempt but is giving him another chance to testify, as he says he plans to plead the Fifth.

Last month, Kellogg became the first person in Pence's inner circle to be subpoenaed by the committee. In its letter to Kellogg, the committee specifically expressed interest in learning more about a January 2021 meeting with Trump and White House attorney Pat Cipollone, during which Trump insisted that Pence not certify the election, and any other meetings.

The committee also stated in its letter that Kellogg had been at the White House on January 6 as the attack unfolded and has "direct information" regarding Trump's "statements about and reactions to the Capitol insurrection."

Kellogg is considered a key witness because of his proximity to Trump on January 6. The former President's then-national security adviser, Robert O'Brien, was out of town that day.

Kellogg's attorney told CNN on Tuesday his client is testifying and cooperating with investigators. The attorney also said Kellogg had not asserted executive privilege over testimony or documents.

While a committee aide declined to comment on what had been asked or answered during the deposition, they did not refute the assertion that Kellogg is cooperating with the panel.

The panel also spoke with Dustin Stockton, one of the organizers behind pro-Trump rallies that took place on January 5 and 6.

Before meeting with the committee, Stockton's lawyer, Josh Nass, told reporters that his client has text messages and emails with people "very senior in the former President's orbit," as well as with members of Congress, that he would turn over to the committee Tuesday.

Those lawmakers and people close to Trump "have good reason to be quivering in their boots today," Nass said.

"We're talking about all sorts of ... email correspondences, text messages," he said.