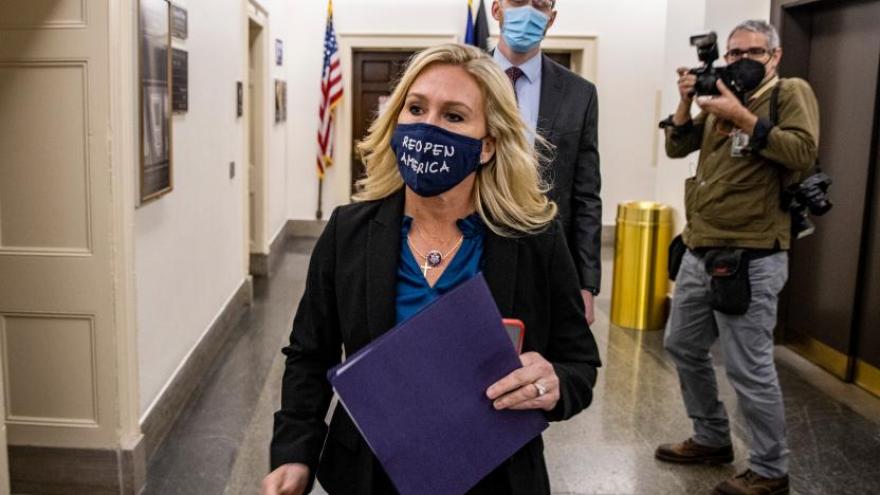 Rep. Marjorie Taylor Greene (R-GA) leaves her office at the US Capitol on February 03, 2021 in Washington, DC.

(CNN) -- The House voted Thursday evening to remove Republican Rep. Marjorie Taylor Greene from her committee assignments, a decisive step that comes in the wake of recently unearthed incendiary and violent past statements from the congresswoman that have triggered widespread backlash from Democrats and divided congressional Republicans.

The vote tally was 230-199 with 11 Republican House members voting with Democrats to remove Greene from her committee assignments.

Greene defended herself ahead of the vote in a speech on the House floor and attempted to distance herself from the dangerous and debunked QAnon conspiracy theory, which she has previously embraced.

The congresswoman said that after "seeing things in the news that didn't make sense to me," she "stumbled across" QAnon at the end of 2017.

Greene said that she became "very interested" in the conspiracy theory and began posting about it on Facebook and talking about it, adding that throughout 2018 she was "upset about things" and felt she could not trust the government.

"The problem with that is though is I was allowed to believe things that weren't true, and I would ask questions about them and talk about them, and that is absolutely what I regret," she said.

Greene also said that she believes "9/11 absolutely happened" and "school shootings are absolutely real and every child that is lost, those families mourn it."

The measure approved by the House directs Greene's removal from the House Education and Labor Committee and Budget Committee "in light of conduct she has exhibited."

The move could set a risky precedent as Democrats target a sitting member of the opposing party in Congress over views expressed prior to her serving as an elected official -- one that has the potential to someday be used against the party by Republicans.

House Speaker Nancy Pelosi insisted on Thursday, however, that she has no concerns about the precedent it could set.

"None, not at all. Not at all. If any of our members threatened the safety of other members we'd be the first ones to take them off of a committee. That's it," Pelosi said.

Outrage over Greene grew more intense in Congress in the wake of a report from CNN's KFile that she repeatedly indicated support for executing prominent Democratic politicians in 2018 and 2019 before being elected to Congress.

The Georgia Republican has also faced backlash over recently resurfaced comments about the 2018 Parkland school shooting.

Students who survived the Parkland, Florida, shooting and families of the victims have called for Greene's resignation after comments surfaced that showed her agreeing with people who claimed the shooting was a "false flag" operation.

A spokesman for McCarthy called such comments from Greene "deeply disturbing" in a recent statement and McCarthy attempted to distance Republicans from her rhetoric in his statement on Wednesday.

"Past comments from and endorsed by Marjorie Taylor Greene on school shootings, political violence, and anti-Semitic conspiracy theories do not represent the values or beliefs of the House Republican Conference. I condemn those comments unequivocally. I condemned them in the past. I continue to condemn them today. This House condemned QAnon last Congress and continues to do so today," he said.

But the California Republican went on to accuse Democrats of divisiveness, saying that "the Democrats are choosing to raise the temperature by taking the unprecedented step to further their partisan power grab regarding the committee assignments of the other party."

Pelosi criticized House Republicans for failing to punish Greene, saying on Thursday ahead of the vote, "I remain profoundly concerned about House Republican leadership acceptance of extreme conspiracy theorists." She went on to say, "particularly disturbing is their eagerness to reward a QAnon adherent, a 9/11 truther, a harasser of child survivors of school shootings and to give them valued committee positions, including, who could imagine they would put such a person on the education committee."

Greene has faced pushback from some prominent congressional Republicans, including Senate Minority Leader Mitch McConnell of Kentucky, who slammed her embrace of "loony lies and conspiracy theories," without naming the congresswoman, in a short but pointed statement Monday night.

Despite her remarks on the House floor Thursday, Greene has otherwise been publicly defiant in the face of the criticism. In a tweet on Thursday, she wrote, "It's not just me they want to cancel. They want to cancel every Republican. Don't let the mob win."

She addressed the controversy during a closed-door meeting of the House GOP conference on Wednesday evening and said her social media posts do not reflect who she is as a person, according to a person in the room.

She announced on Saturday that she had spoken with former President Donald Trump and said she is "so grateful for (Trump's) support," adding, "More importantly the people of this country are absolutely 100% loyal to him because he is 100% loyal to the people and America First."

House Majority Leader Steny Hoyer, a Maryland Democrat, made the first move toward stripping Greene of her roles on the two committees after speaking with McCarthy on Wednesday.

McCarthy later told reporters he had offered to have Greene moved to the Small Business Committee.

"Marjorie's also a small business owner. Move her to Small Business. I made that offer to Democrats and they chose to do something that Congress has never done," he said.

Democratic Rep. Debbie Wasserman Schultz of Florida, who sponsored the privileged resolution to have Greene removed, outlined on Monday in a call with reporters how the House could strip Greene of her committee assignments. The resolution required only a simple majority to pass, not a two-thirds vote.

"We can remove her from the committee because ultimately even though our party leaders and our party process appoints us to committees, the House actually ultimately confirms those party recommendations, essentially, and so because it's a House action we're able to take a House action to remove a member from committee," she said.