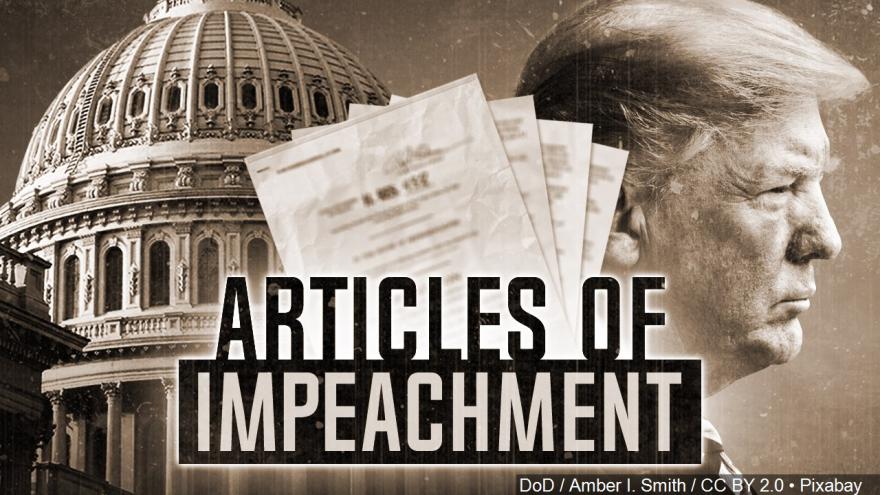 (CNN) -- The House of Representatives will take two historic votes on articles of impeachment Wednesday that could make Donald Trump the third president in American history to be impeached.

The votes mark the culmination of a rapid three-month inquiry into allegations that the President pressured Ukraine to investigate his political rivals and withheld US security aid and a White House meeting. The inquiry led to charges that Trump should be removed from office on two impeachment articles: abuse of power and obstruction of Congress.

Trump's impeachment is slated to be bitterly debated on the House floor, and the votes are expected to fall almost completely along party lines. All Republicans are expected to oppose impeachment, and only three Democrats have signaled they will break ranks to vote against one or both articles, including one, Rep. Jeff Van Drew of New Jersey, planning to change parties.

It's been 85 days since House Speaker Nancy Pelosi announced that Democrats would launch an impeachment inquiry after an anonymous whistleblower complaint alleged that Trump had solicited interference in a July phone call with Ukrainian President Volodymyr Zelensky to help his 2020 reelection campaign. Democrats say their investigation revealed a months-long campaign directed by the President and carried out by his personal attorney Rudy Giuliani for Ukraine to announce an investigation into former Vice President Joe Biden and his son Hunter Biden, along with the 2016 election. The President withheld US security aid and a one-on-one meeting that Zelensky sought, they say, and then obstructed the investigation by defying congressional subpoenas across the administration.

"Very sadly, the facts have made clear that the President abused his power for his own personal, political benefit and that he obstructed Congress as he demanded that he is above accountability, above the Constitution and above the American people," Pelosi said in a letter to colleagues Tuesday. "During this very prayerful moment in our nation's history, we must honor our oath to support and defend our Constitution from all enemies, foreign and domestic."

Trump and his GOP congressional allies have slammed the impeachment proceedings, accusing the Democrats of rushing to impeach the President ahead of the 2020 election.

The President sent a blistering letter to Pelosi on Tuesday accusing Democrats of an "illegal, partisan attempted coup."

"History will judge you harshly as you proceed with this impeachment charade," he wrote.

The House will debate the impeachment resolution for six hours on Wednesday before taking a separate vote on each impeachment article. There are just a handful of undecided Democrats remaining, as most of the Democrats representing the 31 districts Trump won in 2016 have said they will vote to impeach the President.

The House vote will shift the impeachment proceedings to the Senate, where Republicans control the majority. Senate Majority Leader Mitch McConnell on Tuesday predicted that the Senate would have a "largely partisan outcome," after saying last week that he was coordinating with the President's lawyers ahead of the trial.

McConnell and Senate Minority Leader Chuck Schumer are already clashing over witnesses in the Senate trial, expected to begin in January, after the Democratic leader requested four witnesses on Monday, including acting chief of staff Mick Mulvaney and former national security adviser John Bolton, to which McConnell objected.