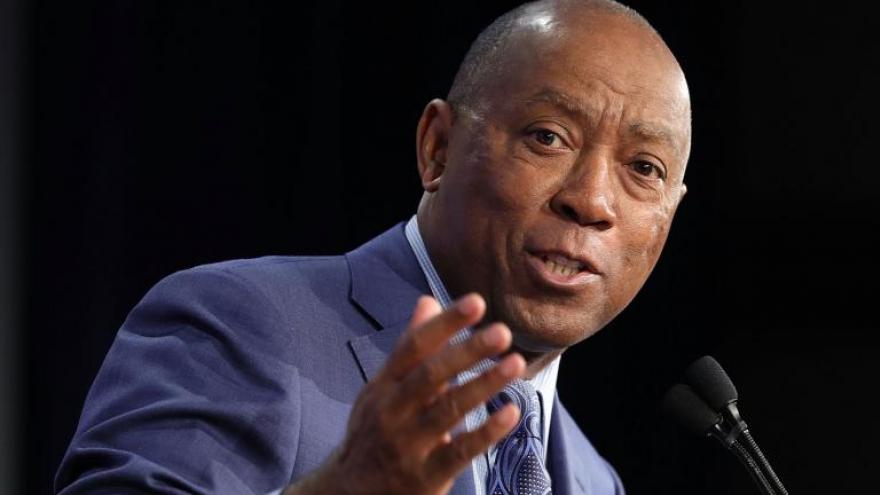 (CNN) -- The Democratic mayor of Houston on Wednesday stopped the Texas Republican Party from holding its state convention in-person next week amid a spike in coronavirus cases.

Escalating his push for the Texas GOP to hold its convention virtually, Houston Mayor Sylvester Turner had said earlier in the day that he had asked the city's legal department to review the contract between the State Republican Executive Committee and the convention venue's operator, Houston First Corporation.

Turner announced later that he had officially instructed Houston First Corporation to cancel its contract with the state GOP.

"A letter has been sent to the (executive committee) of the state Republican Party by Houston First signed by the president and the chairman canceling this convention," the mayor said at a press conference.

"These are some very serious times and the public safety of the people attending the convention, the employees, their family members, the people in the city of Houston -- the public health concerns are first and foremost, paramount," Turner added.

Turner, who is Black, spoke in personal terms at one point during the presser, invoking the memory of his late mother as he explained the reasoning behind his decision.

"The linchpin for me (was) when one of the people on my staff, combined with my sister, who said to me, 'mayor, brother, your mom was a maid working at these hotels. And if your mom was alive today working at one of these hotels (would) you as the mayor still allow this convention to go forth and run the risk of infecting your mom?' " he said. "And the answer is no."

Turner continued: "So you don't have to be my mom, OK? But I am the mayor of every single person in this city. And if you're not willing to step up and do the right thing, I am not going to divorce my responsibility and my job."

The Texas Democratic Party applauded Turner's move in a statement later Wednesday, saying that without it, hospitality workers in the city "would have been forced to go through with this convention at clear risk to their health and livelihood."

The mayor had said during a City Council meeting earlier Wednesday that the city would exercise any provisions it finds that would allow it to cancel the contract and not allow the GOP convention to go forward.

The Texas GOP convention was set to be held indoors at the George R. Brown Convention Center from July 16-18 and was expected to draw thousands to downtown Houston. Committee meetings were set to begin on July 13.

Texas GOP Chairman James Dickey said in a statement earlier Wednesday that the party's legal team is "assessing the ability of the City to act at this time in this manner and weighing our legal options."

"We are prepared to take all necessary steps to proceed in the peaceable exercise of our constitutionally protected rights," Dickey said.

The Texas Republican Party had previously announced that the convention will have multiple precautions and safety measures for attendees, including thermal scanners at entrances and hand sanitizer stations throughout the convention. Masks will be provided to comply with the governor's mandate.

Meeting areas will be "deep-cleaned thoroughly" between gatherings and there will be expanded seating allowing attendees to practice social distancing, the party said.

Dickey on Wednesday reiterated the safety measures implemented for the convention.

"After allowing tens of thousands of protestors to peaceably assemble in the same city, in the same area, without any of the safety precautions and measures we have taken, he is seeking to deny a political Party's critical electoral function that should be equally protected under the constitution," Dickey said of Turner.

The party had previously said that it prepared for an online convention as the "ultimate contingency plan."

On Monday, the mayor's office said it sent a letter to the Texas GOP's executive director urging them to cancel the in-person convention and hold it virtually.

"Health inspectors will be on-site for the entire convention to ensure all guidelines are being followed. If they are not, the inspectors have the authority to shut down the convention," the office said on Twitter.

The office also said it sent the state GOP "conditions they must adhere to in order to hold the convention."

The Houston Health Department's health authority, Dr. David Persse, sent a letter to Turner and the Houston First Corporation's president on Tuesday, warning that the convention is a "clear and present danger to the health and well-being of convention attendees, workers, local hotel and restaurant owners and Houstonians because of the surging pandemic."

Turner during Wednesday's city council meeting called it "a letter that as the mayor of Houston that I simply cannot ignore or overlook."

"It is not prudent, it is not wise, and it is not in the public health safety of this city, the delegates, the employees and others, for this convention -- the state Republican convention to move forward, and we will exercise the provisions of the contract to cancel this convention," Turner said of the planned gathering.

In a statement on its website, the George R. Brown Convention Center and Houston First Corporation said they do not make any decisions on postponing or canceling an event, instead leaving it to the discretion of the event organizers.

Texas on Wednesday had at least 216,026 reported cases and 745 deaths, according to data from Johns Hopkins University. Harris County, which encompasses Houston and is the most populous county in Texas, leads the state in confirmed cases.