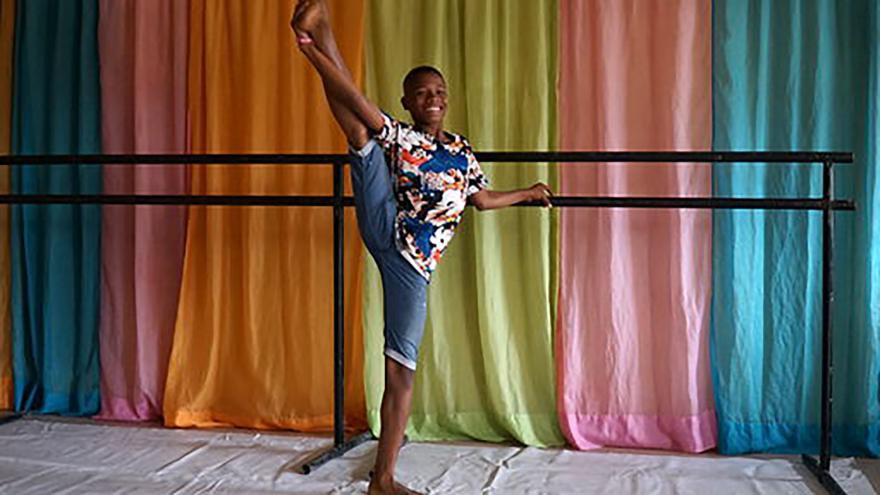 Just a few short months later, he has become a viral internet star and landed a prestigious scholarship in America.

Madu thought he was being recorded for a study session by his ballet instructor, instead, the footage of him practicing his moves was posted on social media and has been been shared widely across the world, with some of his fans including Hollywood actors Cynthia Erivo and Viola Davis.

Many of those watching were impressed by his ability to land his moves perfectly, even while dancing barefoot on concrete and in the rain. Viola Davis was moved to write: "We create, soar, can imagine, have unleashed passion, and love....despite the brutal obstacles that have been put in front of us! Our people can fly!!!"

His dancing also caught the attention of Cynthia Harvey, the artistic director of the ABT Jacqueline Kennedy Onassis School of Dance in New York.

Harvey was so impressed by his talent that she tracked him down and offered him a scholarship with the American Ballet Theatre where he will attend a summer school in 2021.

Nigerian producer Fade Ogunro, who runs the Bookings Africa platform, also offered to pay "for his entire formal education anywhere in the world until he graduates from Uni."

In July, Madu also won the South African International Ballet Competition's grand prize in a virtual event. The prize includes a scholarship to attend dance classes in the US, accompanied by his dance teacher.

He told CNN that he did not plan to go viral, but he is happy that he did.

"I was surprised because I didn't have it in mind that the video would go viral. The best part of being recognized is when I got a grand prize to go to the US because so many people don't have that opportunity but I thank God that I do," he said.

Madu says his interest in ballet developed after watching 'Barbie in the 12 Dancing Princesses' a 2006 cartoon about 12 princesses who share a passion for the dance.

"When I was watching the cartoon, I told my mum that I want to do ballet," he said.

He eventually got the chance to learn the dance after relocating to Ojo, a suburb of Lagos with his mother, where they met Daniel Owoseni Ajala, founder of the Leap of Dance Academy.

Ajala founded the dance academy in 2017 and has been teaching ballet for free to children who are unable to pay for a dance education since then.

When the self-taught instructor learned of Madu's desire to dance, he said he encouraged Madu's mother to enroll him.

It was during one of their sessions that he recorded Madu's now viral dance video, telling CNN that he never imagined that it would circulate rapidly.

"It (the video) wasn't something we envisaged to come out the way it did. It was just something that was supposed to show corrections of movements... It was bigger than I imagined, and I started getting calls. Celebrities were posting us," he said.

With schools closed as a result of Covid-19 restrictions in Nigeria which so far has more than 54,000 cases of the virus, Ajala's students practice dance techniques six days a week.

Madu says he stays committed to the craft is by and practices the techniques learned at the academy for around five hours daily.

"When I first started I thought ballet was easy to dance, I didn't know it was hard. But I kept on working hard... anytime he (Ajala) teaches us anything, I go home to practice and come back to show him," Madu said.

A fascination with dance

Like Madu, Ajala took an interest in ballet at a young age. As a teenager, he watched 'Save The Last Dance', a 2001 movie and immediately became fascinated with dance.

Now 29 years old, he said he learned to dance ballet by watching YouTube tutorials.
"I loved the movie and I just wanted to know how all those things that were done in the movie were done. I started searching on YouTube and getting Google pdf files to broaden my understanding of what I saw in the videos," he explained.

Even though he never really set out to be a teacher, he said many years of practicing ballet techniques on his own led him to fall in love with the art.

Leap of Dance Academy is housed at Ajala's home. Every day after school, his 12 students walk into his apartment, where he pushes aside his furniture and spreads a sheet over the concrete floor for dance practice.

One of his major challenges, he said, is not having a suitable space to practice, "Our children sometimes train on the bare floor which is not suitable for dancers. But we just keep moving so that we don't keep crying about the things we don't have," he said.

But despite the challenges, many of his students, like Madu, have managed to excel in ballet.

'Ballet is meant for girls'

When he first set out to teach ballet, he said he was trolled for it because people assumed it was meant for girls. "There is a perception that it is not an African dance. Being a male dancer is worse, people think ballet is not meant for boys," he said.

Historically, ballet started in the 17th century and was originally performed by royalty including King Louis XIV, who was king of France from May 1643 till 1715.

However, over the past decades, more women have joined and dominated the industry, adding to the belief that ballet is exclusive to women.

Madu has also had to battle similar stereotypes. He said many people still think he should not be dancing.

"When people see me they say that ballet is meant for girls, sometimes it makes me discouraged but I keep on working hard and encourage myself," he said.

"I want to be different," he added. "To be a ballet dancer so that I won't be the same thing with others who want to be doctors, lawyers or bankers."

Madu also wants to help change the perception that ballet cannot thrive in places like Nigeria.

"I'm hoping to be a professional ballet dancer and I want people to know that ballet can blow here in Nigeria."