How Brazil gambled on unproven drugs to fight Covid-19 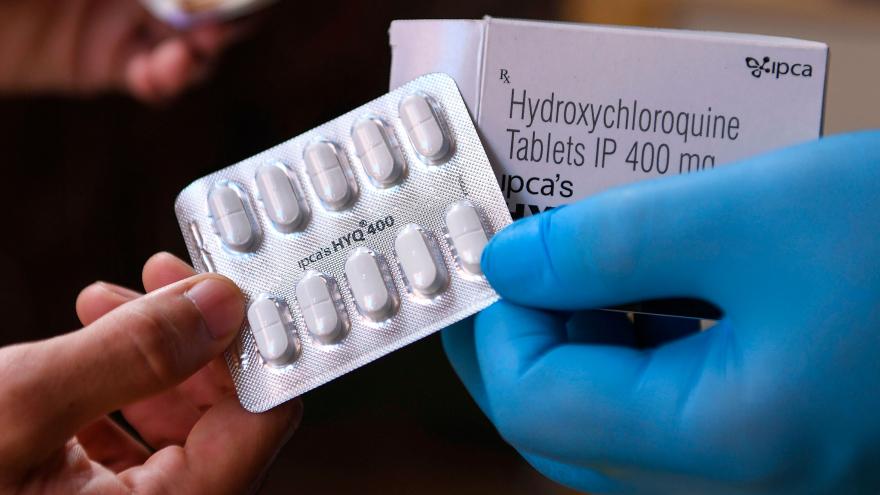 Brazilian President Jair Bolsonaro has long been a champion of drugs chloroquine and hydroxychloroquine to cure Covid-19, despite multiple studies that show that they are not effective. Pictured is a vendor displaying hydroxychloroquine tablets at a pharmacy. - Narinder Nanu/AFP/Getty Images

By Jose Brito and Shasta Darlington

(CNN) -- Brazilian President Jair Bolsonaro has long been a champion of drugs chloroquine and hydroxychloroquine to cure Covid-19, despite multiple studies that show that they are not effective. Now, documents show that his government spent emergency funds on the medicines and continued to produce and distribute them at unprecedented rates throughout 2020 while rejecting at least one offer to purchase a vaccine already in the final stage of trials because the terms were "abusive."

After repeatedly promoting the potential for chloroquine and hydroxychloroquine to both prevent and mitigate the effects of Covid-19, Bolsonaro himself tested positive last July. "If I had taken hydroxychloroquine as a preventative measure, I would still be working," he said, even though the drug, most commonly used against malaria, had not actually been proven effective against the coronavirus and the World Health Organization (WHO) had discontinued a major trial with hydroxychloroquine.

While in quarantine he posted a video on social media showing him taking what he said was his third dose of hydroxychloroquine.

"I'm feeling really good. I was feeling so-so on Sunday, bad on Monday. Today Tuesday, I'm feeling much better than Saturday, so without a doubt," he said as he held up a pill and then swallowed it. "It's working."

Just last week, Bolsonaro again admitted that he could be proven wrong and that the drug might not have any impact on the coronavirus, but added "at least I didn't kill anyone. Now, if by chance, it proves to be effective down the road, those of you who criticized, part of the media, you will be held accountable."

According to exclusive documents obtained by CNN affiliate CNN Brasil, Bolsonaro was not only talking up the drugs last year, his government was actively using emergency funds designated to combat the Covid-19 pandemic to purchase and distribute them even after they had been shown to be ineffective.

In May, Brazil's Healthy Ministry officially recommended chloroquine for early treatment of Covid-19, and in June extended the recommendation for children and pregnant women, the same day that the US Food and Drug Administration revoked its emergency use authorization for hydroxychloroquine and despite mounting evidence that it was not effective at preventing or curing Covid-19.

Two days later, on June 17, the Brazilian Society of Infectious Diseases published an open letter saying it was "urgent and necessary" to halt the use of hydroxychloroquine in the treatment of Covid-19. The Health Ministry, however, did not change its recommendations over the following months and doctors reported being pressured to prescribe them.

In September, the Health Ministry's strategic medicines office confirmed to CNN Brasil that it was in the process of acquiring more chloroquine with resources earmarked for combatting Covid-19 because its stockpile had fallen to 375,500 doses. It did not specify how much it was ordering or how much it would cost.

"In 2020 the malaria program has seen an increase in the number of cases in Brazil, and as has been announced daily, the number of cases of Covid-19 in Brazil is still high," the department said in a written response. "Therefore it is expected that the demand from states and municipalities for this medicine will remain high in the second half of 2020."

They did not specify what part was used for its malaria program and what part for combatting Covid-19, but according to figures obtained by CNN Brasil, a total of 3.23 million pills were produced by the Brazilian army's pharmaceutical unit in 2020. That compares with 265,000 pills produced in 2017 and none produced in 2018 or 2019.

And according to the Health Ministry's own figures, the number of cases of malaria was 60,713 in the first six months of 2020, 16 percent lower than the first half of 2019.

Documents obtained by CNN Brasil using Brazil's Freedom of Information Act show that between the months of April and August, the Health Ministry's office for the coordination of strategic medicines requested 1.5 million pills of chloroquine be distributed to state health departments by the Army's pharmaceutical lab.

According to the documents, the distribution was aimed at "combatting the Covid-19 pandemic" and the pills were distributed based on the number of suspected cases in each state.

The distributions continued in the second half of the year, even after the FDA had revoked its emergency use authorization and several studies had concluded that chloroquine and hydroxychloroquine were not effective in the treatment of Covid-19. The Army told CNN Brasil that between September 2020 and January 2021, 420,000 doses were distributed.

One contract seen by CNN Brasil shows that in September, the army spent $144,000 on raw materials needed to produce chloroquine, paying 167 percent over market value — a purchase that was flagged as suspicious by the Federal General Accounting Office. In a statement to CNN, the army said that prices had risen because of fluctuations in the exchange rate and an increase in demand internationally.

In the same month, Brazil received a letter from the Pfizer CEO Albert Bourla urging the country to sign a contract to buy 70 million doses of its Covid-19 vaccine and offering to meet with the government. Pfizer was already in late stage trials with its vaccine at this time. CNN Brasil first reported on the existence of the letter last month. It was sent to Bolsonaro and several cabinet ministers on Sept. 12, when the death toll in Brazil was already the second-highest in the world at 131,000 and the number of confirmed cases was 4.3 million.

But negotiations with Pfizer sputtered and did not end in an agreement. News of the letter sparked anger when it emerged last month as the government scrambled to roll out a vaccine program.

Brazil's Health Ministry responded to CNN Brasil saying the terms of the offer, which included an agreement not to hold Pfizer responsible for negative side effects, were "abusive." The ministry said it was also concerned about the small number of doses being offered in the first lot: 500,000, but added that negotiations were still ongoing.

When Brazil finally launched its national vaccination program on January 18 after repeated delays, it started with just six million doses for a population of more than 210 million.

Bolsonaro's government had bet on the Oxford/AstraZeneca vaccine as the centerpiece of its program. But due to delays, they eventually turned to CoronaVac, the vaccine developed by China's Sinovac and tested in Brazil in a partnership with the governor of Sao Paulo state, who also happens to be Bolsonaro's political nemesis.

So far, 2.2 percent of the population has received a first dose of the two-dose regimen required by both the CoronaVac and Oxford/AstraZeneca vaccines.

But even as authorities started to roll out vaccines in January, the government continued to promote chloroquine as a treatment on its apps and in the protocol which had not been updated since it was posted last May and where it was characterized as a key component of 'early treatment.'

When asked why the ministry was still recommending the drug, Health Minister Eduardo Pazuello told journalists last month that he had never recommended a specific drug. "We defend, encourage and orient sick people to immediately go to their health clinic, to a doctor, and the doctor will make a clinical diagnosis of the patient. What medicines the doctor prescribes, that is a private domain with the patient."

Bolsonaro appointed Pazuello, an army general, when his second health minister quit after declining to issue federal guidelines for the use of hydroxychloroquine and chloroquine in the treatment of Covid-19.

"I was elected to make decisions and the decision about chloroquine goes through me," Bolsonaro declared last May. The following day, Nelson Teich resigned. His replacement, Pazuello, issued the guidelines.