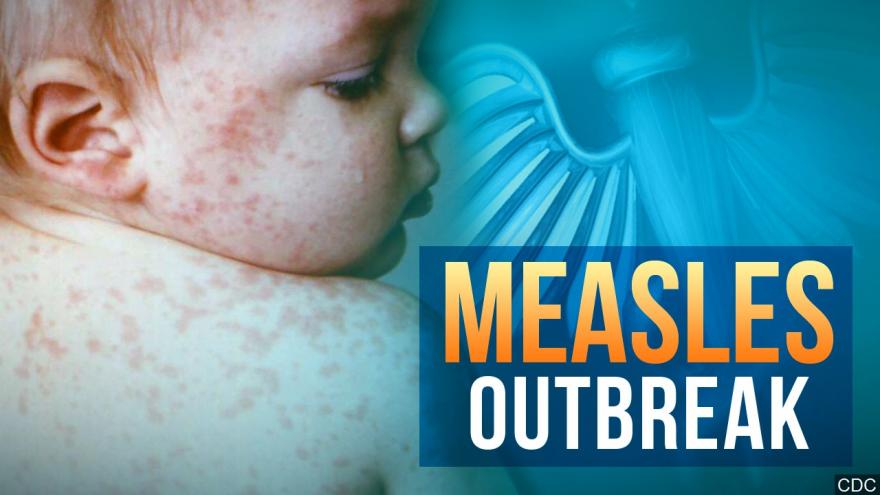 WASHINGTON (AP) — The U.S. has counted more measles cases in the first two months of this year than in all of 2017 — and part of the rising threat is misinformation that makes some parents balk at a crucial vaccine, federal health officials told Congress Wednesday.

Yet the vaccine is hugely effective and very safe — so the rise of measles cases "is really unacceptable," said Dr. Anthony Fauci, infectious disease chief at the National Institutes of Health.

The disease was declared eliminated in the U.S. in 2000, which means it was not being spread domestically. But cases have been rising in recent years, and 2019 is shaping up to be a bad one.

"These outbreaks are tragic since they're completely avoidable," said Rep. Brett Guthrie, R-Ky.

"This is a public health problem for which science has already provided a solution," agreed Rep. Frank Pallone, D-N.J.

Here are some questions and answers about measles:

Q: How dangerous is measles?

A: Measles typically begins with a high fever, and several days later a characteristic rash appears on the face and then spreads over the body. Among serious complications, 1 in 20 patients get pneumonia, and 1 in 1,000 get brain swelling that can lead to seizures, deafness or intellectual disability.

While it's rare in the U.S., 1 or 2 of every 1,000 children who get measles dies, according to the Centers for Disease Control and Prevention.

Q: How does it spread?

A: By coughing or sneezing, and someone can spread the virus for four days before the telltale rash appears, Fauci warned.

The virus can live for up to two hours in the air or on nearby surfaces. Nine of 10 unvaccinated people who come into contact with someone with measles will catch it. Fauci called it "one of the most contagious viruses known to man."

Q: How widespread is measles?

A: In the U.S., the CDC has confirmed 159 cases so far this year in 10 states: California, Colorado, Connecticut, Georgia, Illinois, Kentucky, New York, Oregon, Texas, and Washington. That compares to 372 cases last year, and 120 in 2017.

But measles is far more common around the world — the World Health Organization said it claimed 110,000 lives in 2017. The WHO says there's been a 30 percent increase in measles cases in recent years. Unvaccinated Americans traveling abroad, or foreign visitors here, can easily bring in the virus.

For example, a huge outbreak in Madagascar has caused more than 68,000 illnesses and 900 deaths since September. But you don't need to go as far as Madagascar — common tourist destinations like England, France, Italy and Greece had measles outbreaks last year, noted CDC's Dr. Nancy Messonnier. Nearly 83,000 people contracted measles in Europe in 2018, the highest number in a decade.

Q: How many U.S. children are vulnerable?

A: Overall about 92 percent of U.S. children have gotten the combination vaccine that protects against measles, mumps and rubella, known as the MMR vaccine. Two shots are required, one around the first birthday and a second between age 4 and 6. Full vaccination is 97 percent effective at preventing measles.

But the CDC says 1 in 12 children doesn't receive the first dose on time, and in some places vaccination rates are far lower than the national average. For example, an outbreak in Washington state is linked to a community where only about 80 percent of children were properly vaccinated.

Q: Is the vaccine safe?

A: Yes, said Fauci and Messonnier, who point to decades of use by millions of children each year — and who made sure their own children were vaccinated.

In the late 1990s, one study linked MMR vaccine to autism but that study was found to be a fraud, and Fauci said later research found no risk of autism from the vaccine.

Still, misinformation about MMR safety is widespread. Fauci said the solution isn't to criticize people who have no way to know what's false. Instead, "we need to education them to show them what the evidence is."

Q: Why isn't everyone vaccinated?

A: Some people can't be immunized for medical reasons — including infants and people with weak immune systems — and most states allow religious exemptions. But while vaccination against a list of contagious diseases is required to attend school, 17 states allow some type of non-medical exemption for "personal, moral or other beliefs," according to the National Conference of State Legislatures.

In Washington state, lawmakers are debating ending that personal or philosophical exemption, as are several other states. California ended a similar exemption in 2015 after a measles outbreak at Disneyland sickened 147 people and spread across the U.S. and into Canada.