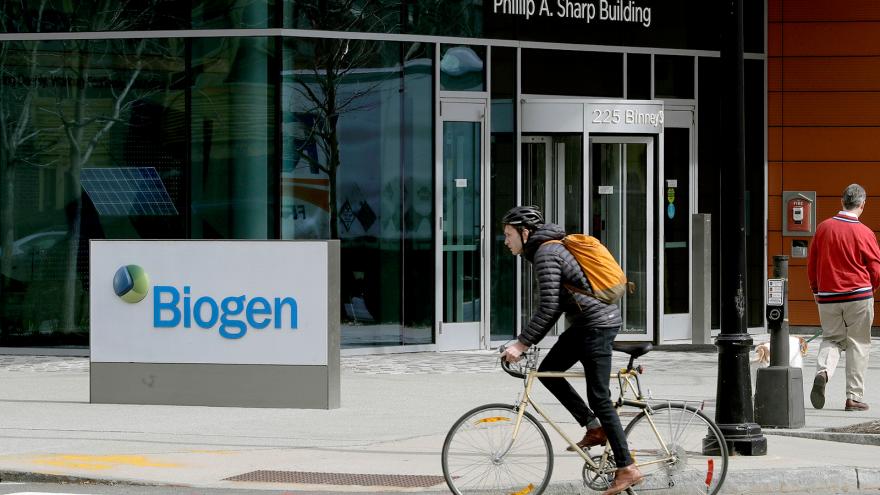 The US Food and Drug Administration\\\'s approval last month of Aduhelm, manufactured by Biogen, has raised many questions and concerns about the approval process, the drug\\\'s efficacy and its price tag. People are shown passing the Biogen Inc., headquarters, Wednesday, March 11, 2020, in Cambridge, Mass. - Steven Senne/AP

(CNN) -- The controversial new drug for Alzheimer's disease, Aduhelm, is priced at $56,000 a year for treatment -- but Alzheimer's patients won't be the only ones shouldering the cost.

All of Medicare's roughly 60 million enrollees will likely see their premiums rise to cover the new medication, experts say -- and the burden will also fall to federal and state governments and, therefore, to taxpayers.

Here's how it's expected to work: Because Aduhelm will be administered in physicians' offices, it should be covered under Medicare Part B, not Part D plans, which pay for medications bought at pharmacies. For new Part B drugs, Medicare typically reimburses 103% of the list price.

So if 500,000 of the estimated roughly 6 million Americans with Alzheimer's disease are prescribed Aduhelm, total spending for one year would be nearly $29 billion, which would far exceed spending on any other drug covered under Medicare Part B or Part D in 2019, according to the Kaiser Family Foundation. Total Medicare spending for all Part B drugs was $37 billion in 2019.

Medicare is expected to bear much of the cost since the vast majority of the estimated 6 million people affected by Alzheimer's are senior citizens. The program typically covers FDA-approved medications, though it could place some limits.

The US Food and Drug Administration's approval last month of Aduhelm, manufactured by Biogen, has raised many questions and concerns about the approval process, the drug's efficacy and its price tag. On Thursday, the FDA narrowed the group of patients who could receive Aduhelm to those with mild cognitive impairment or milder stages of disease. The next day, the agency's acting commissioner requested an independent review of the approval.

The Centers for Medicare and Medicaid Services, which administers Medicare, is still reviewing Aduhelm's FDA approval and all of the evidence, administrator Chiquita Brooks-LaSure said at an Axios event last week.

Traditional Medicare enrollees have to pick up 20% of the cost of most Part B medications, which would translate into about $11,500 in out-of-pocket costs for those prescribed Aduhelm. Most have supplemental policies, such as Medigap plans, but they could see their premiums rise to account for insurers' liability associated with the treatment. Those in Medicare Advantage could also have to shell out thousands in co-insurance.

Why Medicare enrollees will get hit

But all Medicare beneficiaries would likely see their annual premiums increase to cover part of the cost of the drug. While many factors remain unknown, a rough calculation shows that half a million patients prescribed Aduhelm could add about $97 annually to premiums, or about $8 a month, according to Kaiser experts. If 1 million patients take the drug, premiums could rise about $190 a year, or nearly $16 a month.

"That's just for one drug," said Juliette Cubanski, deputy director of the Program on Medicare Policy at Kaiser, noting that the hike would be on top of the regular annual premium increase.

Medicare premiums don't usually rise by that much each year, she continued.

As for the bulk of the Aduhelm's annual cost -- that would be borne by taxpayers, who fund Medicare Part B through general revenues.

Medicare isn't the only government health program that would be affected. State and federal Medicaid spending would also increase.

Medicaid pays the Part B premium for about 12 million low-income Medicare beneficiaries and covers the coinsurance for 9 million of beneficiaries who are in both programs, according to Kaiser.

Also, some people with early-onset Alzheimer's disease may be enrolled in Medicaid, though there isn't a lot of data on that, said Rachel Dolan, senior policy analyst with Kaiser's Program on Medicaid and the Uninsured. A large share of state spending goes toward Medicaid, but the impact would depend on how many Alzheimer's patients live in the state.

Medicaid programs, which typically have to cover FDA-approved medications, have been worried about drugs the agency has approved in the past through its accelerated program.

"They are concerned about paying for the drugs that are approved without the verified clinical benefit," Dolan said.