How long should movies be in theaters before streaming? Hollywood is trying to find out 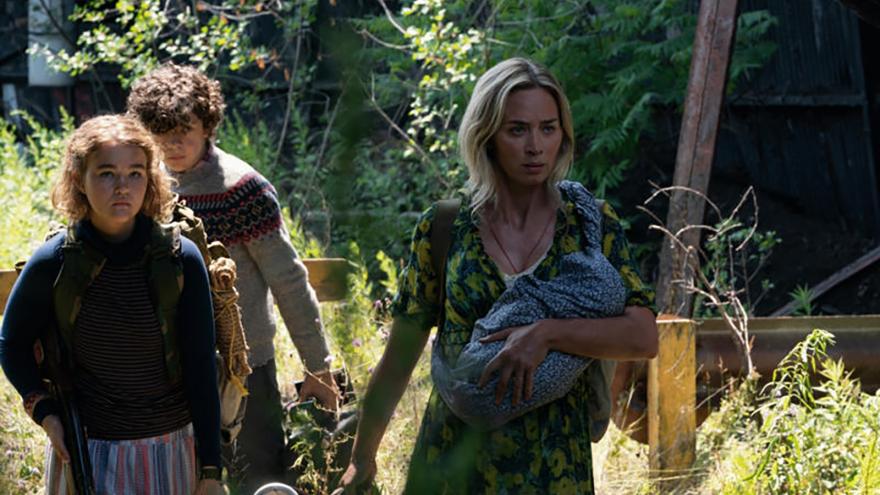 With the movie business upended during the pandemic and tilting more towards streaming than cineplexes, Hollywood is rethinking its business model. One significant debate is how long a gap there should be between a film\'s theatrical release and its availability on streaming services. On Wednesday, ViacomCBS announced that \"A Quiet Place Part 2\" will stream on its new service, Paramount+, just 30 to 45 days after being released in theaters. - Jonny Cournoyer/Paramount Pictures

(CNN) -- With the movie business upended during the pandemic and tilting more towards streaming than cineplexes, Hollywood is rethinking its business model. One significant debate is how long a gap there should be between a film's theatrical release and its availability on streaming services.

Although some studios have tried releasing films simultaneously in theaters and on streaming platforms, that model can undercut the millions, or even billions, of dollars a movie might earn at the box office. But it's unlikely studios will revert back to the pre-pandemic model of waiting multiple months between a movie's theatrical release and its availability on-demand.

So is there a "Goldilocks Zone" for theaters and streaming? If so what would it look like?

Studios are trying to figure that out, and now Paramount has added yet another variable into the equation.

Search for the sweet spot

On Wednesday, ViacomCBS announced that certain Paramount Picture films, including blockbusters such as the upcoming action film "Mission: Impossible 7" and the horror flick "A Quiet Place Part 2" will stream on its new service, Paramount+, just 30 to 45 days after being released in theaters.

That's a lot shorter than the traditional 70-day window, but not quite as disruptive as releasing films in theaters and at home on the very same day.

According to Paul Dergarabedian, senior media analyst at Comscore, that 30- to 45-day timeframe gives blockbusters enough time to make money in theaters while maintaining momentum for fans who are holding out for streaming.

"45 days, give or take, is the perfect theatrical window for the modern era," Dergarabedian said. "It gives enough time for a movie to play in theaters, build prestige and exclusivity, while at the same time [it] gives consumers the knowledge that they're going to have the opportunity to watch the movie on the small screen within a reasonable amount of time."

Box office numbers somewhat back up this assessment since ticket sales begin to taper off around week five or week six of a film's release. And this was the case even before the pandemic.

For example, 2019's "Joker," starring Joaquin Phoenix in an Academy Award-winning performance as the clown prince of crime, made roughly $316 million in its first six weeks, and only slightly more — a total of $335 million — after 22 weeks in US theaters.

Other 2019 hits including "Spider-Man: Far From Home," "Toy Story 4" and "The Lion King" followed the same box office trajectory.

"The windows don't matter to true movie fans since they want to see a movie in a theater in the early days of release," Dergarabedian said. "While the theatrical window is important and should remain a part of the business, it makes sense for studios and exhibition to look at all possible opportunities. New world, new strategies."

"The marketplace will decide the fate of most films"

Streaming is becoming more dominant in Hollywood, so why not release a film on streaming and in theaters on the same day?

That's what Warner Bros. announced in December, when it said its entire 2021 slate of films would be released on HBO Max the same day they hit theaters. (Warner Bros. and CNN share the same parent company, WarnerMedia.)

WarnerMedia CEO Jason Kilar explained at the time that "our content is extremely valuable, unless it's sitting on a shelf not being seen by anyone."

"We believe this approach serves our fans, supports exhibitors and filmmakers, and enhances the HBO Max experience, creating value for all," he added.

Shawn Robbins, chief analyst at Boxoffice.com, noted that it's important for studios to weigh the short-term benefits with a long view.

"For a company trying to drive subscriptions to a streaming service, the day-and-date approach fulfills a need in the middle of a pandemic while providing theaters with new content," he said. "To that end, a zero-day window for theatrical exclusivity is experimental and may not be sustainable beyond the health and economic crises of the moment."

With theaters shuttered or operating at lower capacity due to the health crisis, other Hollywood studios have also been experimenting with their models.

Universal Pictures announced a new deal with AMC, the world's largest movie theater chain, this summer that allows the studio's new films to have three weekends — or 17 days — of in-theater exclusivity. Disney, Hollywood's biggest studio, released "Mulan" for an extra fee on Disney+ while releasing it in overseas markets.

Now, Paramount joins the fray with its 30 to 45-day window for Paramount+, but what will be the standard going forward?

The bottom line is Hollywood studios are using the current disruption to their industry to find out what could be the best path to the future in a rapidly evolving business. There is currently no real sweet spot or new industry standard when it comes to releasing films, so there's a lot of experimenting going on.

In the end, what works for one company might not work for the others. At least until there's a clearer consensus.

Ultimately, Dergarabedian said the length of time a movie should play in theaters is no longer "a static proposition. It's dynamic."

"If a movie isn't bringing in the dollars as expected in theaters after a few weeks, then it makes sense to move it to the small screen. However, if a movie is still killing it at the box office, let it ride," he said. "The marketplace will decide the fate of most films."