'How many more protests will it take?' Relatives grieve the death of Rayshard Brooks 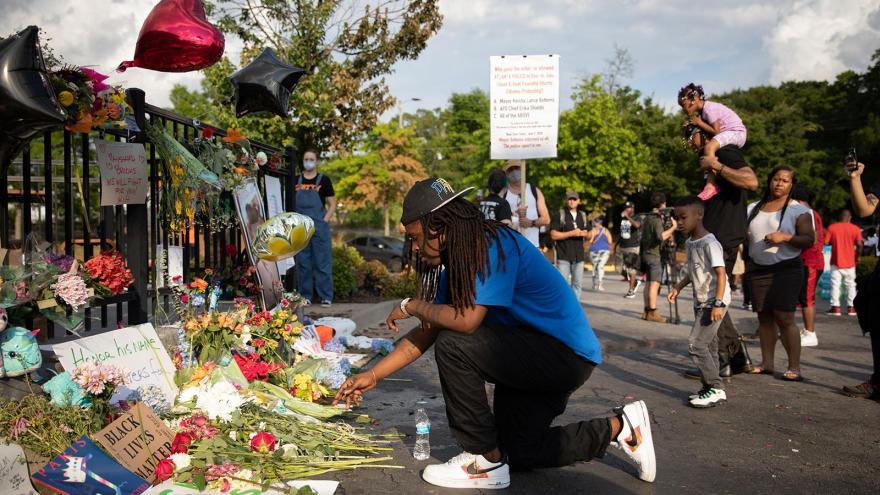 A man kneels at the memorial for Rayshard Brooks. Rayshard Brooks, 27, was shot and killed by police in a struggle following a field sobriety test at the Wendy's.

But they never expected the young father be the next black man to die at the hands of police.

"On June 12, one of our biggest fears became our reality," his niece Chassidy Evans said. "Not only did we lose another black, unarmed male. This time it landed on our front doorstep."

Brooks, 27, was shot twice in the back as he ran away from an Atlanta police officer outside a fast-food restaurant. He had failed a sobriety test after falling asleep in his car in the drive-thru lane, officials said.

Hours after the killing, police Chief Erika Shields stepped down. The officer who shot Brooks, Garrett Rolfe, was fired. Another officer at the scene, Devin Brosnan, was put on administrative duty.

"The day after my uncle's murder, his oldest daughter sat (waiting) for her father, in her birthday dress, to come and take her skating," Evans said.

"Not only are we hurt, we are angry. When does this stop? We're not only pleading for justice. We're pleading for change."

They also called for an end to Georgia's stand-your-ground law and citizen's arrest law, which made national headlines after the death of Ahmaud Arbery, an unarmed black man killed while jogging in southeast Georgia.

"Before it happened to us, I could only guess at how it felt. But now I understand," sobbed Brooks' cousin Gymaco Brooks.

"How many more protests will it take to ensure that the next victim isn't your cousin, your brother, your uncle, your nephew, your friend or your companion so that we can finally end the suffering of excessive police force?" she asked, fighting back tears.

"I'm scared every day," Tomika Miller said, holding one of the couple's three daughters. "My family members go out ... (and) I don't even know if they're going to come home."

Nationwide rallies denouncing police brutality have taken place every day for 20 days since the death of George Floyd, who died after a Minneapolis officer pressed his knee against his neck for almost 9 minutes.

Cities have taken a look at how their police departments are funded and operated.

Atlanta mayor orders changes in use of force

Mayor Keisha Lance Bottoms said she cannot wait for a task force to give her use of force recommendations, so she signed several orders Monday calling for the city's chief executive to work with the interim police chief on changes.

Officers should use only the amount of objectively reasonable force necessary to protect themselves or others, she said. Deescalation attempts should be taken before the use of force, and the department should require officers to intervene when they see a use of force violation and report it to an on-duty supervisor.

"Our police officers are to be guardians, and not warriors within our communities," Bottoms said.

The task force, which met for the first time last week, should send its initial recommendations by June 24.

How a peaceful encounter turned fatal

Police responded to a call Friday night about a man sleeping in a car at a Wendy's drive-thru and began talking with Brooks, who agreed to pull over. Authorities said he failed a sobriety test.

One of the officers tried to arrest him, which led to a struggle between Brooks and two officers, footage of the incident shows. Brooks took an officer's Taser during the struggle and then pointed it at one of the officers as he ran away. That officer then fatally shot Brooks.

Family attorneys, the district attorney and the mayor said the Brooks should not have been killed. For more than 20 minutes, Brooks responded to questions calmly and complied with officers' requests before they tried to arrest him.

"It's very difficult when you see (the video), when you see the demeanor of Mr. Brooks, to imagine that some short time later, it ends up with him being dead," Fulton County District Attorney Paul Howard.

What should the officer have done?

The fact that Brooks was unarmed is important, CNN law enforcement analyst Charles Ramsey said. Early in the encounter, an officer asked Brooks if he could pat him down, and Brooks agreed.

"Now you know he's not in possession of a firearm or any other deadly weapon," said Ramsey, a former Philadelphia police commissioner.

After Brooks stole the officer's Taser and ran away, "it looks like he may have even fired the Taser at some point in time," Ramsey said.

But it's unlikely Brooks would have been able to use the Taser a second time, Ramsey said.

"Once you fire the Taser, it has to recycle before it can be used again," he said. "I would doubt very seriously if most citizens would even know how to operate a Taser."

So instead of shooting Brooks, Ramsey said the officer could have continued the foot pursuit, "get on a radio and call for some assistance."

"You've got the car. You've asked for his driver's license. You know who he is. So even if you don't get him right now, you can get him later," Ramsey said.

"The need to immediately apprehend is taken away. And you can only use deadly force under certain, very narrow circumstances," such as if the officer's life or anyone else's life is in danger, or if the person being pursued poses a serious danger to the public.

Attorney: Getting handcuffed can still lead to death

"People ask, 'Why would (Brooks) resist if they're trying to put him in handcuffs?'" family attorney L. Chris Stewart said.

"Well, they put George Floyd in handcuffs, and he was subsequently killed. So just getting put in handcuffs -- if you're African American -- doesn't mean you're going to be nicely taken to the back of a police car."

He said Brooks and Floyd suffered the same fate, even though Floyd did not struggle with police.

"We watch videos all the time where it's a Caucasian individual or a person of a different race that resists and lives. We've watched videos of a person go do a mass shooting and live," Stewart said.

"There was absolutely no reason for (Brooks) to die because he resisted and ran away."

'Destroying things is not going to help'

Brooks' family thanked all the protesters who are peacefully demanding an end to excessive police force.

While rallies Monday have been peaceful, police are still looking for whoever set fire Saturday night to the Wendy's where Brooks was killed. Police are offering a reward of up to $10,000 for information leading to the arrest of the arsonist.

Howard, the top prosecutor in Fulton County, said possible charges against Rolfe could include murder, felony murder or voluntary manslaughter. He said a decision could come by Wednesday.

"Or the alternative is whether or not he fired the shot simply to capture him or some other reason. If that shot was fired for some reason other than to save that officer's life or to prevent injury to him or others, then that shooting is not justified under the law."