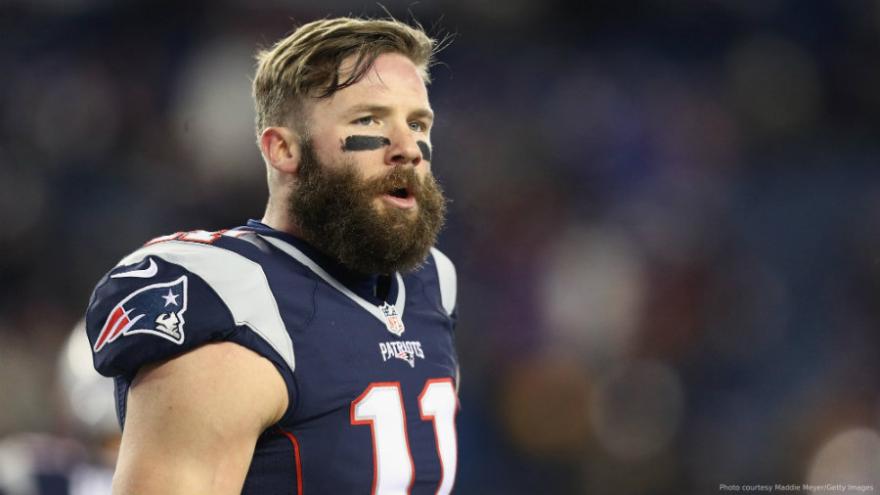 (CNN) -- New England Patriots player Julian Edelman was in Texas visiting a friend when he got a disturbing message on social media.

"I can't help but notice in the comments section there is a kid saying he's going to shoot up a school, can everybody alert the authorities please????" an unidentified Instagram user posted under a photo of Edelman in Austin.

In addition to the message under his photo, the Instagram user sent him a separate direct message.

"Dude, there is a kid in your comment section says he s going to shoot up a school, i think you should alert the authority," the message said.

What followed was a flurry of actions that authorities said may have helped stop a potential school shooting.

Edelman told The New York Times that when he saw the message, his first thought was the high school massacre in Parkland, Florida.

"With the emotions of what happened, and I have a kid now, I said, holy Toledo, what is going on?" he told the paper in a story published Wednesday.

Edelman alerted Shannen Moen, his Boston-based assistant, and asked her to scour through the hundreds of comments under his latest post at the time -- a picture of him with fellow NFL player Danny Amendola on March 25.

Moen found the alarming comment. "I'm going to shoot my school up watch the news," the unidentified Instagram user wrote, according to The Times.

Boston authorities notified their Michigan counterparts, who went to the home where the message originated. There, they found a 14-year-old boy who confessed to posting the threat, Port Huron Police Capt. Joseph Platzer told CNN affiliate WBZ.

At the home, police found two rifles that belonged to the boy's mother, according to the affiliate. The teen was detained on a charge of making a false report of a threat of terrorism, Platzer said.

Since the Parkland shooting in February, schools have faced numerous threats of violence.

Macomb County, which neighbors Port Huron's St. Clair County, has especially seen a spike of threats against schools. A normal school year would see 17 charges of false threats or threats of terrorism, according to Prosecuting Attorney Eric Smith. This year, the number is 51.

In those incidents, 40 people were charged as juveniles and 11 as adults, he said.

In the Parkland shooting, gunman Nikolas Cruz posted several threats on social media, including Instagram, leading to criticism against authorities for their failure to act.

Edelman thanked the unidentified person who alerted him to the threat.

"This individual's thoughtfulness and awareness may have helped avert another tragedy," his representatives said in a statement. "Julian is very grateful for the quick action of law enforcement authorities in Massachusetts and Michigan, and he thanks all law enforcement for their efforts in helping all of us become more aware and vigilant."

CNN has reached out to Edelman and the Instagram user who alerted him, but has not heard back.

CORRECTION: This story has been updated to correctly describe the location of Macomb County.