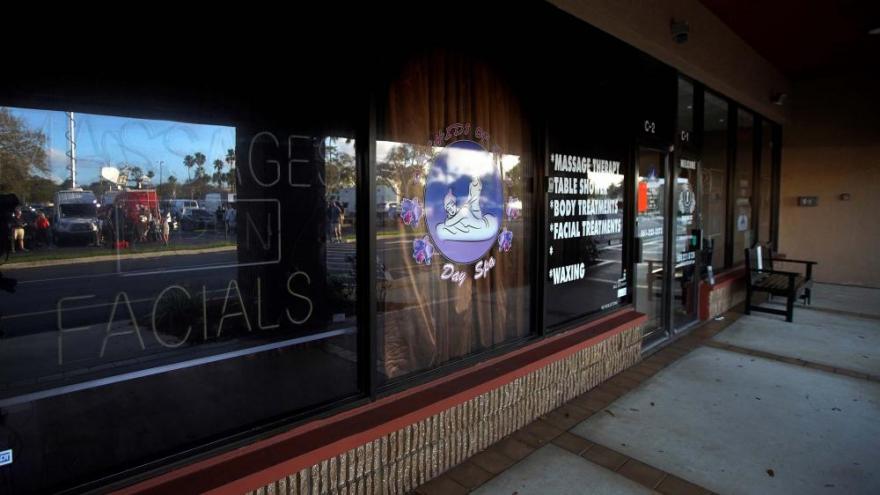 It took investigators about four months of work -- involving stakeouts, dumpster searches, and the secret installation of video cameras inside the business -- to bust the Orchids of Asia Day Spa and charge Robert Kraft and other men with misdemeanor solicitation of prostitution, police say. Full credit: Barry Chin/The Boston Globe/Getty Images

(CNN) -- Police allege New England Patriots owner Robert Kraft spent a total of 53 minutes at a Florida day spa across two visits -- during which time they say he paid for sex.

It took investigators about four months of work -- involving stakeouts, dumpster searches, and the secret installation of video cameras inside the business -- to bust the Orchids of Asia Day Spa in Jupiter and charge Kraft and other men with misdemeanor solicitation of prostitution, police say.

Kraft's charges, to which he has pleaded not guilty, cast a national spotlight on a wider police probe into whether the people who ran that spa and other spas in Florida were involved in sex trafficking -- that is, coerced their employees to engage in sex work.

The Jupiter spa was just one of several Florida spas ensnared in the larger, seven-month investigation. Scores of alleged johns have been or will be charged in the case, and what has been made public is just a fraction of a large international operation stretching from China to New York to Florida's Atlantic Coast, Martin County Sheriff William Snyder said.

Court documents reveal what police did to investigate the Jupiter spa and capture what they say is evidence of Kraft and more than 20 other men receiving sexual services there in January. Here is what the papers show:

Jupiter police get a tip from another agency

Jupiter police started investigating Orchids of Asia Day Spa in late October, after sheriff's detectives in the county to the north -- Martin County -- gave them some information.

Martin County detectives since July were investigating possible human trafficking and prostitution at several massage parlors in their own jurisdiction. Now they were telling Jupiter police that they had reason to believe that Orchids of Asia might be doing similar things, a police affidavit says.

A detective searches the Web, and sees 'rub and tug' reviews

Acting on the tip, a Jupiter detective searched for the business on the Internet, and saw several reviews describing it as a "rub and tug" -- slang for a parlor where a masseuse will provide a sexual service.

The detective decided to covertly record the outside of the business on video for about a week, 24 hours a day, starting November 6. The affidavit doesn't say how this video surveillance was done.

Each day, the spa opened at about 9 a.m. and closed around 10:30 or 11 p.m. Between seven and 20 clients visited the spa each day, and all were male, the affidavit says, citing the video.

All of the clients would stay for about 30 to 60 minutes, the affidavit says.

Police ask a health inspector to go in. She sees signs that women were living there

After seeing the video, the detective asked a Florida Department of Health investigator to inspect the business.

The inspector visited on November 14. When she came back, she said she met three women -- a manager and two employees -- and saw conditions that raised suspicions.

The inspector "advised it appeared as though the female employees were living there," the affidavit reads.

Inside were two rooms with beds, including sheets and pillows. Next to the beds were "dressers which housed several personal items including medicines and clothing for the females," the affidavit says.

"Inside the kitchen of the business, (the investigator) located a refrigerator filled with food and condiments, consistent with individuals living inside."

Three police detectives were outside in unmarked vehicles. At the inspection's end, a detective saw a woman go out a back door and toss a small plastic bag into a dumpster, the affidavit says.

Snyder, the Martin County sheriff, would later tell reporters about the general conditions in all of the parlors that were busted in the larger sting.

"It was clear that multiple women were working and living inside the spas," Snyder said in late February. "They were cooking on the back steps of the business. They were sleeping in the massage parlors on the massage tables.

"They had no access to transportation. They were moved from location to location."

Detectives check the trash and find evidence of sexual activity

On the night of November 14, two detectives went to the dumpster and looked inside.

They found several small grocery-style plastic bags. Inside one were several pieces of ripped paper.

A detective put together the pieces, revealing a ledger of sorts -- "a spreadsheet with several columns," the affidavit says.

"The columns were titled Name, Service, Add Time, Amount, In, Out, Cash, Card, Cert./Pre-Paid, Card tip and other," the court document says.

Also inside the bag were several "napkins which were wet and appeared to be covered in seminal fluid," the affidavit says.

A later lab test showed the fluid was semen, the affidavit says.

Investigators again pulled trash from the dumpster on November 19. Again, they found several napkins covered in fluid -- and again they tested positive for semen, according to the affidavit.

Police watch the business again -- and start pulling clients over

On January 10, police again watched the business from the outside. This time, when men left the business, police looked for traffic violations.

Police stopped four cars that had left the business that day, for allegations including speeding, running a red light, and "violation of a traffic control device," the affidavit says.

During those traffic stops, a detective asked the men about what they had done at the spa.

Each man said, according to the affidavit, that a woman gave them a massage, and at the end, the woman manually stimulated their genitals to climax.

They were given a hot towel and/or napkins to clean off with, they allegedly said.

Police get a search warrant, and use a 'tactical ruse' to install cameras inside

On January 15, a detective obtained a search warrant authorizing police to secretly install video cameras inside the business.

"A tactical ruse was conducted at the target business to remove the current occupants and install covert video surveillance equipment," the affidavit says.

During that subterfuge, two women left the business and stood with officers in the parking lot while three detectives went inside and installed hidden cameras in four massage rooms and the lobby.

The court document doesn't say what the ruse was, or whether the women knew any of the visitors were law enforcement officers.

Snyder, the Martin County sheriff, told CNBC later that detectives posed as workers in other professions. He did not elaborate.

From January 18 to January 22, video shows more than 20 men getting sexual services in the parlor, usually, but not always, after massages, the affidavit says.

The sexual contact often involved the masseuse handling the man's genitals, but in a few cases there was other contact, such as the woman giving the man oral sex, or the man touching the woman, according to the affidavit.

After the men left the business, police would note the license plate of the car, and often would make a traffic stop and identify them with their driver's license, the affidavit says.

Kraft, a Massachusetts resident who also has a home in Palm Beach, was one of those men, according to the affidavit. The 77-year-old visited the parlor on January 19 and 20, police say.

On the afternoon of January 19, the cameras show Kraft visit the spa and pay for services in cash at the front desk, and he was then taken to a massage room, undressed and lay on a massage bed. Two female employees can be seen on the video manipulating his genitals and later wiping Kraft's genitals with a towel, according to the affidavit. He then gave the two women $100 cash, the affidavit says.

After being there for 39 minutes, Kraft left and got into a white Bentley. Police then conducted a traffic stop on the vehicle and confirmed his ID, the affidavit states.

Kraft gave her a $100 bill plus at least one other unidentifiable bill and left about 14 minutes after he arrived, according to the document.

January 20 was the day that Kraft's Patriots played the Kansas City Chiefs, in Kansas City, for the AFC championship and a berth to the Super Bowl. He made it to Kansas City for that game.

Jupiter police announced the charges about a month later

Jupiter police announced on February 22 that Kraft was one of a number of men being charged with misdemeanor solicitation of prostitution in connection with their visits to the Jupiter day spa.

The charge is a first-degree misdemeanor, punishable by up to one year in jail, a $5,000 civil penalty and 100 hours of community service.

A representative for Kraft denied last month that Kraft committed a crime.

"We categorically deny that Mr. Kraft engaged in any illegal activity. Because it is a judicial matter, we will not be commenting further," the representative said.

Kraft's arraignment is scheduled for March 28.