How the Indy Star and Rachael Denhollander took down Larry Nassar 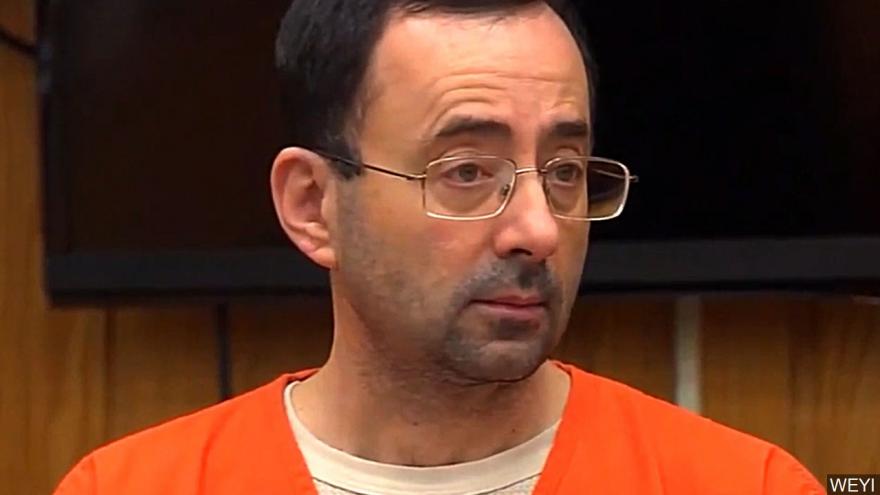 (CNN) -- After 156 women came forward to say they were abused by Larry Nassar, Michigan Assistant Attorney General Angela Povilaitis singled out for praise the organization that started the reckoning with the disgraced doctor's two decades of sexual abuse.

Not prosecutors. Not police. Definitely not USA Gymnastics or Michigan State University.

No, she praised The Indianapolis Star.

"We as a society need investigative journalists more than ever," Povilaitis said in court. "What finally started this reckoning and ended this decades-long cycle of abuse was investigative reporting."

That praise was delivered with good reason. The story of Nassar's downfall started in August, 2016, with the Indianapolis Star and some good, old-fashioned local investigative reporting on Indianapolis-based USA Gymnastics. The Star's five-month investigation led to a major expose and then to a pivotal email from Rachael Denhollander, one of Nassar's victims.

"Without that first Indianapolis Star story in August of 2016, without the story where Rachael came forward publicly shortly thereafter, he would still be practicing medicine, treating athletes and abusing kids," Povilaitis said.

Nassar, the longtime team doctor for USA Gymnastics and Michigan State, was sentenced to up to 175 years in prison on Wednesday after an extraordinary seven days of powerful victim impact statements.

But he was far from the main target of the Indy Star's initial reporting. In a time of significant media staff turnover, particularly in local journalism, the Star was able to break this story thanks to time, resources and the trust of their readers.

"At the time we started, Nassar wasnt even on our radar," Tim Evans, one of the reporters, told CNN. "It just came out of the blue after we published our first story about (USA Gymnastics) failing to address concerns about coaches, and took us off on a tangent, down a rabbit hole, for 16 months."

Back in August 2016, the newspaper published a story reporting how USA Gymnastics had for years failed to tell police or proper authorities about allegations of sexual abuse against its coaches.

The article -- written by Evans, Marisa Kwiatkowski and Mark Alesia -- detailed several specific cases in which USA Gymnastics took complaints about coaches and literally filed them away, even as the coaches continued to abuse young gymnasts. And it identified specific policies that USA Gymnastics followed that contributed to sexual abuse.

On the morning that story was published, the reporters received an email. The author was Rachael Denhollander, an attorney and mother of three, and she had a story to tell.

"I recently read the article titled 'Out of Balance' published by the IndyStar," Denhollander wrote in the email. "My experience may not be relevant to your investigation, but I am emailing to report an incident that may be. I was not molested by my coach, but I was molested by Dr. Larry Nassar, the team doctor for USAG. I was fifteen years old, and it was under the guise of medical treatment for my back."

In her victim impact statement, Denhollander explained why she chose to tell her story to the Star.

"I watched for a chance to be believed and I waited," she said. "And then the Indy Star story came out about the rampant cover-up at USAG and I knew this was the chance and I wrote them immediately."

Kwiatkowski, one of the reporters, said it wasn't a coincidence that Denhollander approached them.

"She said that she had never come forward before because she thought that no one would believe her, and that this is the first time she felt that she might be believed, and so she wanted to share her story," said Kwiatkowski.

From there, the reporters split up the work. Mark Alesia interviewed Denhollander, who agreed to be named and to tell her story about Nassar on camera to the Star. Meanwhile, Kwiatkowski spoke with another victim, later identified as Olympic medalist Jamie Dantzscher, who told a remarkably similar story about Nassar.

Tim Evans read deeply into medical treatments and then interviewed Nassar. Far from the meek man in court this past week, Nassar was a confident, world-renowned physician with USA Gymnastics who at the time claimed that he was performing legitimate medical procedures.

"We were taking a chance in some ways coming out with criminal allegations against him," Evans said. "But we felt confident in the stories and the veracity of what the survivors had told us."

The resulting story on Nassar was published in September 2016. The article exposed Nassar and also explained how USA Gymnastics learned about allegations against him in the summer of 2015 but did not tell either Michigan State University or the gymnastics gym Twistars -- two places that continued to employ Nassar as a team doctor.

The story took off. After it published, the Indy Star began receiving calls from across the country from more of Nassar's victims saying they, too, were abused.

Michigan State University fired Nassar a week later, and he was arrested and charged with criminal sexual conduct in November 2016.

'We are incredibly lucky'

The August story on USA Gymnastics had been in the works since March of that year, Kwiatkowski said. She praised her editors for giving the reporters the time and support needed to get the story, such as paying for a flight to Georgia to get copies of court records.

"We are incredibly lucky here to have bosses who supported us and understood the importance of the work we wanted to do," she said. "They were behind us completely. They were in the trenches with us that entire time."

Now a year and a half later, the impact of their reporting in court these past two weeks was as much a surprise to the reporting team as it was to everyone else.

"I don't think any of us realized how big it was going to become," Kwiatkowski said. "The number of women that have come forward and the devastation that one person caused has been amazing."

Evans, a self-described "cynical" journalist, was familiar with the women's stories, so he didn't expect to be so affected by the victim impact statements. He was wrong.

"I said 'Oh, that won't be too surprising.' But every one was just another blast (that) shook an old, hardened guy like me," he said.

In court on Wednesday, Povilaitis effusively praised the Indy Star and its work on the Nassar story.

"It shouldn't take investigative journalists to expose predators. It should not take one brave woman put in the unenviable position and choice to go public with her name and be the only public person for months. But thank God we had these journalists. And that they exposed this truth and that they continued to cover this story," Povilaitis said.

"We know federal law enforcement did not stop him nor did trainers or coaches or deans or medical supervisors. Victim disclosures to adults didn't stop him. Reporters began the story and excellent victim-centered, offender-focused police and prosecutors grabbed the baton and brought us here today," she added.

Evans and Kwiatkowski both deflected credit and focused on the bravery of the women who came forward.

"It's kind of embarrassing for me," Evans said. "I'm happy about it and I'm so grateful that these survivors trusted us and reached out to us. That's humbling that they'd share some of the worst moments of their life with us in hopes we'd do something right with it."

And their work reporting on USA Gymnastics and sexual abuse in its community is far from over.

"I think Nassar is the end of one chapter maybe," Evans said. "That may be the big chapter, but there's more out there that we're still digging into."