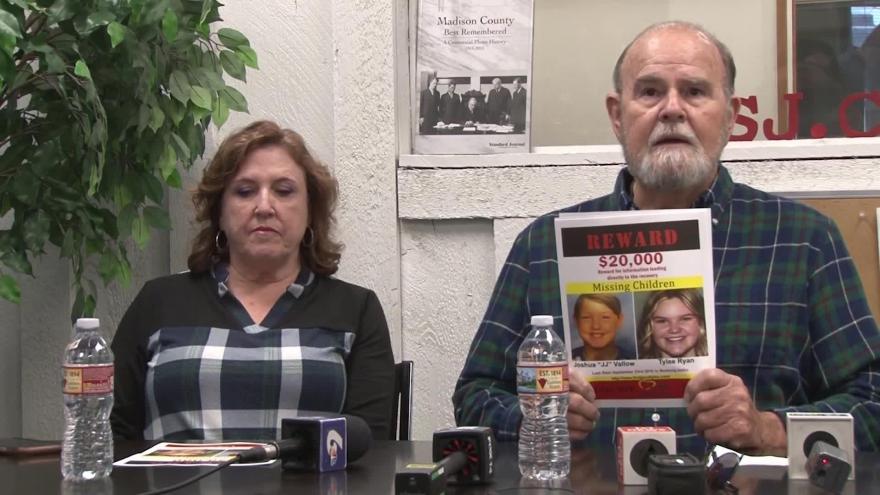 Kay and Larry Woodcock are offering a $20,000 reward for information leading to the recovery of their grandson, Joshua "JJ" Vallow, and his sister, Tylee Ryan, who police reported missing in Idaho.

(CNN) -- When police discovered human remains on Chad Daybell's property, they may have taken a step closer to answering a question that family, friends and many others have been asking for months: where are Tylee Ryan and Joshua "JJ" Vallow?

Each turn in the search for the missing 7-year-old boy and his 17-year-old sister has been sharp and unexpected as their loved ones pleaded with their vanished mother and her husband to bring them back home safely.

Their mother, Lori Vallow, is now in custody on charges including two felony counts of desertion and nonsupport of children. Daybell on Wednesday was charged with two counts of destroying evidence a day after the human remains were found.

The remains have not been positively identified, but they are of children, Fremont County Prosecutor Rob Wood said in court.

A welfare check leads police on a hunt for the truth

In late November relatives asked police in Rexburg, Idaho, to do a welfare check on Joshua because they hadn't talked to him recently.

But police didn't find him at the house when they arrived.

They did see Vallow and Daybell, who, authorities said, told them Joshua was staying with a family friend in Arizona. When police returned the next day to serve a search warrant, both Vallow and Daybell were gone.

Suspicions grew as authorities learned neither child has been seen since September. Tylee was last seen September 8, when she visited Yellowstone National Park with Joshua, Vallow and her uncle Alex Cox.

Joshua was last seen on September 23, the last time he attended Kennedy Elementary School in Rexburg before his mother told the school she would be home-schooling him, according to a court affidavit.

Questions sprang up: Where were the children? How had they gone so long without anyone hearing from them? Why would their mother take off and where had she gone?

As police sought the couple to get answers for those questions in December, an attorney for them made a statement on their behalf, according to East Idaho News, saying he was in contact with them and they wanted to refute any allegations against them.

But he also said he did not know where they were.

Deaths around the disappearances

Though police couldn't get answers from their mother, details of events around the children's disappearance quickly began to emerge that raised more questions.

Shortly before the Tylee, Joshua and their mother moved from Arizona to Idaho, Vallow's estranged husband was shot and killed during a fight with her brother, who was not charged and died in December, CNN affiliate KIFI/KIDK reported.

Daybell was also married before. His former wife, Tammy Daybell, died October 19. A few weeks later, he and Vallow were married.

After Vallow and Daybell married, they told some witnesses Tylee had died a year before her father and others that Vallow did not have any young children, police said.

"We have taken every step available to us, including executing multiple search warrants, interviewing multiple sources, and running down every lead we have found," the Rexburg Police said in a December release. "We strongly believe that Joshua and Tylee's lives are in danger."

'She thinks she's a resurrected being'

Those close to the couple said that leading up to the deaths and disappearances, they had been involved in strong religious ideologies.

Arizona police released body camera footage from January of 2019 of Vallow's ex-husband, Charles Vallow, saying he could not get in touch with the children.

He said their marriage had rapidly deteriorated and that "she thinks she's a resurrected being and a god."

Charles Vallow was killed in the fight about five months later.

Daybell was connected to a religious website called "Preparing a People," which describes itself as a "series of lecture events focusing on self-reliance and personal preparation."

Michael and Nancy James, publishers of the site, said they decided to pull content featuring either Daybell or Vallow in light of Tammy Daybell's death and the disappearance of the children.

Mother and her husband found in Hawaii

The couple was found in January in Hawaii, where they had been since December 1 as authorities searched for Vallow's children.

They were served with a search warrant, and police gave Vallow a deadline to turn Joshua and Tylee over to authorities. But that deadline came and went without any sign of the two.

With their mother and her husband located, the children's grandparents, their brother and Daybell's brother pleaded with them: just give the children to us.

"I'll get on my knees and beg," Joshua's grandfather Larry Woodcock said. "Just give me JJ."

Police did not bring charges against either Vallow or Daybell immediately, saying instead their goal was to find the children.

But in February Vallow was arrested, and in March she was extradited from Hawaii. Her bail remains at $1 million and a preliminary hearing is scheduled to begin July 9.

He was charged with two counts of destroying evidence. The counts allege he concealed the remains sometime between September 2019 and June 2020. His bail was set at $1 million.