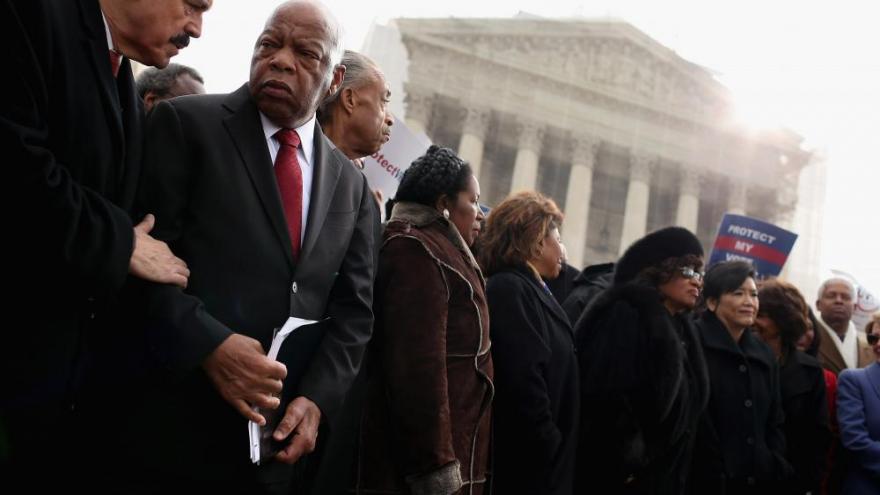 Rep. John Lewis with fellow members of Congress on the steps of the US Supreme Court February 27, 2013 in Washington, DC.

(CNN) -- Georgia's voter restrictions were dashed into law Thursday by Republicans shaken over recent election losses and lies about fraud from former President Donald Trump, yet the measures also developed against a backdrop of US Supreme Court decisions hollowing out federal voting rights protection.

In another world, before the 2013 Shelby County v. Holder decision written by Chief Justice John Roberts, Georgia would have had to obtain federal approval for new election practices to ensure they did not harm Blacks and other minority voters.

And at another time, before the Roberts Court enhanced state latitude in a series of rulings, legislators might have hedged before enacting policies from new voter identification requirements, to a prohibition on third-party collection of ballots to a rule against non-poll workers providing food or water to voters waiting in lines.

But the conservative court has increasingly granted states leeway over how they run elections.

As the justices have turned away challenges to state policies, they have expressed sympathy for local officials who face potentially intrusive federal regulation and protracted litigation. Led by Roberts, the court has also dismissed concerns about the consequences for minority voters as it has curtailed the reach of the 1965 Voting Rights Act.

"Our country has changed," Roberts wrote in the Shelby County landmark, "and while any racial discrimination in voting is too much, Congress must ensure that the legislation it passes to remedy that problem speaks to current conditions. ... (V)oter registration and turnout numbers in the covered states have risen dramatically in the years since."

That case from Shelby County, Alabama, centered on a provision of the 1965 act that required states with a history of discrimination to seek approval from the Department of Justice or a federal court before changing electoral policy. By a 5-4 vote, the court invalidated the provision that still covered nine states, including Georgia.

"The signal the conservatives on the court have sent is that they are willing to tolerate a lot of partisanship in how elections are run," said Professor Richard Hasen, at the University of California, Irvine, law school. "The question is whether things will change now that the 2020 elections showed how precarious our election system is and voter confidence is."

He added: "I think people are going to be looking to the Supreme Court for leadership and looking for it to go beyond partisanship."

The justices are now considering, in a recently argued Arizona case, the strength of a separate Voting Rights Act provision that prohibits any measure that denies someone the right to vote because of race. Unlike the "pre-clearance" provision previously in dispute, this section of the law comes into play after legislation has taken effect and puts the burden on those protesting the law to initiate a lawsuit.

Resolution of that Arizona case, known as Brnovich v. Democratic National Committee, will have repercussions for controversy over laws like Georgia's, which were immediately challenged Thursday night by advocates who say they will disproportionately hurt Blacks.

Across the country, Republican legislators have proposed voting changes that would reverse the pandemic-era steps that made it easier for people to vote last November, especially by mail, and led to record numbers of votes cast.

Congress passed the 1965 Voting Rights Act soon after the Bloody Sunday march in Selma, Alabama. The law reflected the reality of the time that although the Fifteenth Amendment barred racial bias in voting, Blacks were still deterred from casting ballots through poll taxes, literacy tests and other rules.

Roberts highlighted how much he believes times have changed since then. "In 1965, the States could be divided into two groups: those with a recent history of voting tests and low voter registration and turnout, and those without those characteristics," he said. "Today the Nation is no longer divided along those lines, yet the Voting Rights Act continues to treat it as if it were."

Roberts has also made clear that he abhors remedies tied to race, saying in a 2006 voting-rights case: "It is a sordid business, this divvying us up by race."

Yet in the aftermath of the polarizing 2020 election, the country and the high court may be headed for a new chapter of voting-rights cases of a deeper partisan character, intensifying concerns about the future of the Voting Rights Act, as well as First Amendment guarantees of free speech and association.

The three voting rights groups that sued - the New Georgia Project, the Black Voters Matter Fund and Rise Inc. -- grounded their complaint in the Voting Rights Act and in the First and Fourteenth Amendments.

"Rather than promote public confidence in Georgia's elections and ensure election integrity," they asserted, the law "will make voting more difficult, result in disenfranchisement, and shatter voter confidence."

Lower federal court judges have struggled over the standard for assessing the denial of voting rights, and that dilemma is at the heart of the Supreme Court's new Arizona controversy.

In dispute are laws require ballots cast by people at the wrong precinct to be discarded and bar most third parties -- beyond a relative or mail carrier -- from collecting absentee ballots, for example, at a nursing home.

During oral arguments, Roberts and fellow conservatives focused on potential voter fraud and highlighted state authority for overseeing elections. Arizona officials argued that the measures would help prevent voter coercion and other irregularities, as the challengers contended that the new requirements would especially disenfranchise Native Americans and other minorities.

The high court's resolution of the Arizona controversy could have a dramatic impact on the raft of new legislation and ultimately how easy it is for minorities to register and vote. Resolution is expected by the end of June.

"The Arizona case is going to be one of the most significant that the Roberts Court decides," said New York University law professor Richard Pildes. "We're about to learn much more about exactly of how the court understands the constitutional dimensions of the right to vote and the Voting Rights Act."