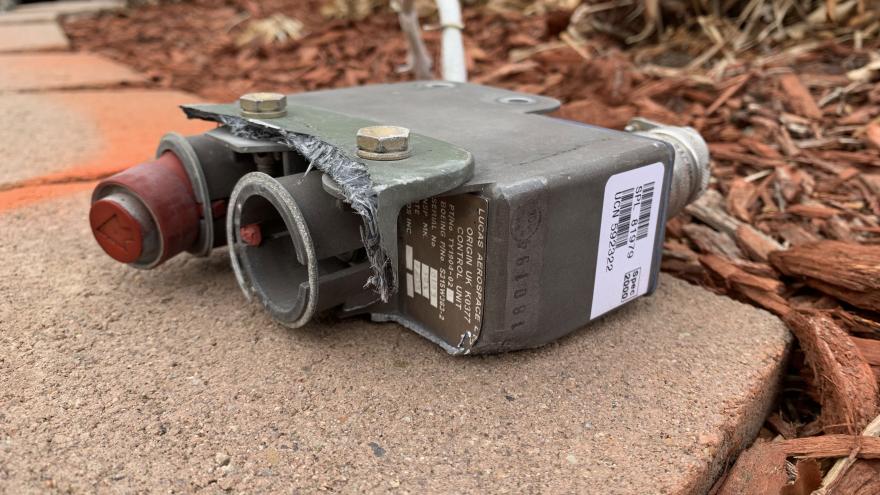 Photos taken by CNN show debris from the plane that lost an engine over Broomfield, Colorado. - CNN

(CNN) -- The loud boom was unmistakable aboard United Flight 328 just after takeoff on Saturday. Something had clearly gone very wrong.

Some of the 241 people on the flight from Denver International Airport to Honolulu opened their windows to see an exposed engine spewing flames and pieces of the plane falling away.

Others closed their windows, grabbed their loved ones and prayed. Thousands of feet below in a Denver suburb, people on the ground ran to shelter to dodge debris suddenly plummeting to the earth.

The pilots issued a mayday call and, after turning back to the airport, landed the Boeing 777-200 plane safely. Remarkably, there were no reports of injuries either in the air or on the ground. Still, interviews with passengers show the incident provided a huge scare for everyone involved.

Here's how those in the air and down below said they reacted during those tense moments.

'There was a big boom'

Travis Loock, a passenger on Flight 328, told CNN it was about 20 minutes after takeoff for Honolulu that he heard a boom.

"There was a big boom and the kind of sound you don't want to hear when you're on the airplane," Loock, who was flying with his wife, said in a phone call. "And I instantly put my shade up, and I was pretty frightened to see that the, the engine on my side was missing."

"We were just glad we weren't over the ocean, because that's where we were heading," he said.

Loock said he could sense the fear on the plane, but everyone was "very calm."

"A lot of people couldn't see the engine on that side, right, so I was a little more freaked out because I could see it, and I knew that was not right," he said.

Nate Fisher heard the sound, too. "I thought lightning struck the plane at first," he told CNN affiliate KCNC.

When Bob Brown heard the explosion, he looked out his window, saw the damage to the engine and took out his phone to film it.

"We looked at each other, my wife and I, held hands, and just wished our kids that we'd see them again," he told KCNC.

Mike Vena was in the middle of the plane when he heard the explosion. "The plane just started shuddering and it was that way for about a half an hour until the plane landed," he told KCNC.

Vena said the crew's professionalism calmed them, but he said he was still worried.

"Initially I think it was fairly panicked," Dan Smith of Portland, Maine, told KCNC, "but I think people did a good job of calming down."

Brenda Dohn, who was traveling with her kids, saw smoke outside the window and knew something wasn't right. "My daughter was sitting on the window and I was just like, 'Don't look, let's close it up, and let's just pray,'" she told CNN affiliate KUSA. "So that's what we did. We kind of just held hands and said some prayers."

Danielle Thomas, who lives in Honolulu, praised the flight crew for their demeanor.

"I think the pilots had a huge hand in making everybody feel safe and comfortable," she told KCNC.

"As soon as we kind of made the corner and we could see the runway, I made sure our family, we told each other we loved each other," he told KUSA. "It makes you all of a sudden remember all those things that you can easily forget."

When the plane landed safely, people cheered before exiting.

Once back safely on land, Loock said he calmed his nerves and prepared for the rest of the journey.

He was not alone in wanting to continue his journey. United said in a statement a majority of the passengers have taken another United flight to Honolulu while "those who did not wish to travel with us this evening were provided hotel accommodations."

What those on the ground did

While those in the air stressed about the landing, those on the ground looked up to see debris falling from the sky.

The large circular covering to the jet engine fell just next to a home, but thankfully missed causing more serious damage. Kirby Klements, the homeowner, told CNN affiliate KMGH he thought his neighbor's trampoline had blown over to his yard.

"But as soon as I open the door, I go, 'that is the front engine of a plane,'" Klements said.

Kieran Cain told CNN he was playing with his children at a local elementary school when a plane flew over and they heard a loud boom.

"We saw it go over, we heard the big explosion, we looked up, there was black smoke in the sky," Cain told CNN.

"Debris started raining down, which you know, sort of looked like it was floating down and not very heavy, but actually now looking at it, it's giant metal pieces all over the place," he said.

"I was surprised that the plane sort of continued on uninterrupted, without really altering its trajectory or doing anything," he said. "It just kind of kept going the way it was going as if nothing happened."

Cain said he and his children took shelter at a gazebo near the playground and watched the debris come down about two or three blocks away.

One Broomfield homeowner told KCNC that he was making sandwiches for his daughters when debris from the plane smashed through his roof.

Another man, Mark Moskovics, told KCNC he heard a loud boom and looked outside to see a large piece of debris fall from the sky in the street.

"So then I went upstairs to get my wife and baby who were napping upstairs and have them come down and make sure they were safe," he said.

Jim Hunter was coaching soccer practice in Commons Park when he saw the debris dropping out of the sky. The soccer team ran to safety, and no one was hurt. "They were just everywhere. The sky was full of these pieces raining down on the field," he told KUSA.