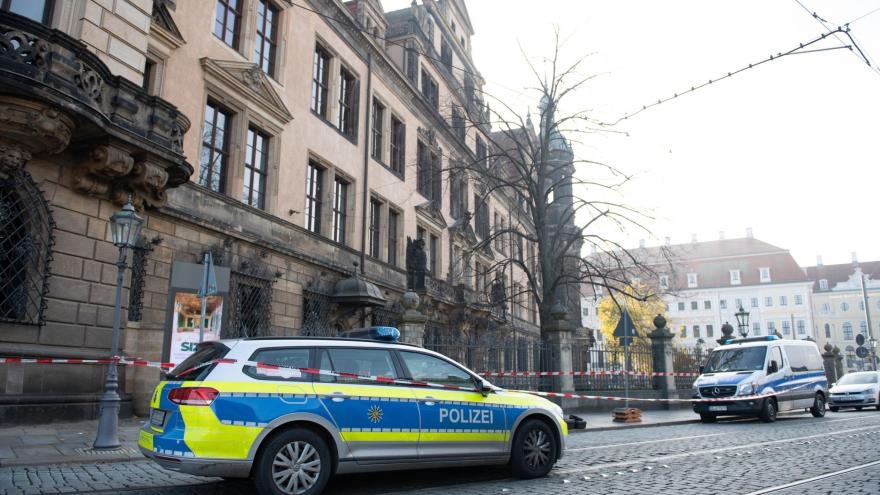 A police car in front of the cordoned-off Royal Palace that houses the historic Green Vault in Dresden. Source: Sebastian Kahnert/DPA/Getty
By Bianca Britton and Stephanie Halasz, CNN

(CNN) -- Thieves have stolen priceless masterpieces from a castle vault in the German city of Dresden, the site of one of the largest collections of treasures in Europe.

Several criminals gained access to the Green Vault in Dresden Castle on Monday, according to Roland Woeller, a local politician. He said the perpetrators had stolen artifacts of "immeasurable value."

"This is an attack on the cultural identity of all Saxons and the state of Saxony," Woeller added. State Police also confirmed the break-in.

The vault features an astounding collection of historical jewelry and precious ornaments -- from shimmering bowls carved out of crystal and agate to jeweled gold figurines and goblets fashioned from gilded ostrich eggs.

Saxony's Prime Minister Michael Kretschmer tweeted that the heist meant all Saxons had been "robbed."

"The valuables found here have been hard-won by the people of our Free State for many centuries," Kretschmer wrote.

The collection was established in the early 18th century by Augustus the Strong, ruler of Saxony. He worked to establish Dresden as a major center for the arts, inviting talented sculptors, goldsmiths and painters to take up residence and commissioned a series of magnificent rooms to showcase his valuables as a way of advertising the city's cultural prominence in addition to its wealth.

The museum said it was closed Monday due to "organizational reasons" and a special police commission has been established following the heist.