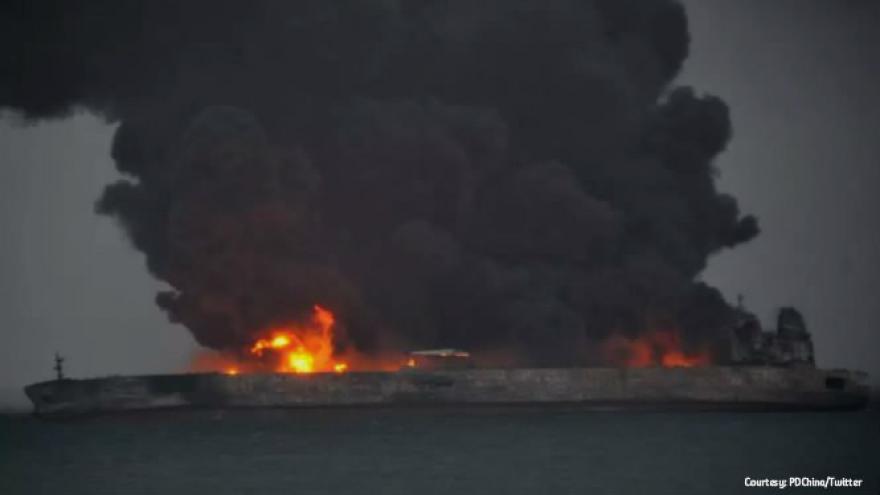 (CNN) -- An oil tanker that collided with a freight ship off the east coast of China was still on fire Monday and at risk of exploding, Chinese authorities said.

The Shanghai Maritime Bureau said Monday morning the vessel and leaked cargo were burning furiously and that fumes were hampering rescue efforts. It said that experts believed there was a risk the vessel could explode and sink.

"The poisonous gas ... is very harmful to rescue workers in the field."

Thirty Iranians and two Bangladeshi citizens went missing from the Panama-registered tanker SANCHI after the collision Saturday. Lu Kang, a spokesman for China's Ministry of Foreign Affairs, said Monday that one body had been found by search-and-rescue teams but the person's identity hadn't been confirmed.

"The environment and the conditions on the ground are not very favorable for search-and-rescue work and some crew members are still missing, Lu said.

"We have also dispatched some cleaning vessels to the site to prevent any secondary disaster," he added.

The Shanghai Maritime Bureau has drawn a 10-nautical-mile avoidance area around the SANCHI.

The collision took place approximately 160 nautical miles (184 statute miles) east of the mouth of the Yangtze River, at about 8 p.m. local time (7 a.m. ET) Saturday, the Ministry of Transport said in a statement.

With a length of 900 feet (274 meters) and displacing more than 85,000 tons, the SANCHI is almost as big as the US Navy's Nimitz-class aircraft carriers, according to the ship-tracking site marinetraffic.com.

The SANCHI is less than 10 years old, according to the website, and was carrying 136,000 tons of oil from Iran to South Korea when it collided with the CF Crystal, which had been transporting food from the United States to the Chinese province of Guangdong, the ministry said.

All 21 Chinese crew on board the Hong Kong-registered freighter the CF-Crystal were rescued, the ministry said.

If the tanker spills its entire load -- around 1 million barrels or 42 million US gallons of oil -- it would roughly equal the 10th largest oil spill in history.

The number of gallons on board is also nearly four times the amount of oil spilled by the Exxon Valdez when it ran aground in Alaska in 1989.

The oil being transported was condensate oil, a type of colorless, ultralight crude oil that is more flammable than normal crude oil, meaning the tanker is at greater risk of exploding.

If the tanker does explode and sink, that will make the cleanup much more difficult as the oil will seep out beneath the surface of the water, according to Babatunde Anifowose, a senior lecturer in petroleum and environmental technology at the University of Coventry in the UK.

But if the tanker does not explode, the environmental impact is likely to be less severe than with a spillage of heavy crude oil. "Between 40% and 70% of the oil is likely to evaporate in the first 24 to 48 hours if the sea is calm," Anifowose told CNN.

Depending on wind direction and strength, however, these fumes could be carried toward the shore and into population areas. The toxic fumes "could aggravate existing health conditions or lead to coughing or asthma," he said.

As for the oil that remains in the ocean, the best outcome is dispersal. "It's good news if the oil spreads out," said Anifowose, "especially if that happens naturally with the wind and waves." The oil will then be broken down into tiny droplets or consumed by microbes that will break down the oil into water-soluble components.

While the colorless nature of condensate oil makes it harder to see than heavy crude oil, it can still be easily seen and monitored because of the sheen it leaves on the ocean surface, Anifowose added.

Chinese maritime officials have launched a search-and-rescue operation involving eight vessels, with support from South Korea, which has provided a coast guard ship and aircraft, the ministry said.

Ali Reza Ayroush, Iran's consular affairs representative in Shanghai, told the Iranian state news agency IRNA on Sunday that there were no witnesses who could account for the missing crew.

"Despite the presence of first responders, firefighters and rescue equipment, given the expansion of leaked crude and the resulting increase in the severity of the flames, the situation is still fluid and the tanker is engulfed in flames," he said.

Iran's Shana news agency, which focuses on the country's petroleum and energy sectors, reported that the SANCHI was managed by the National Iranian Tanker Co. and that its cargo was worth around $60 million. Shana said the oil had been purchased by South Korean customers.