'Huge problem': Passengers are bringing a record number of guns to the airport, TSA says 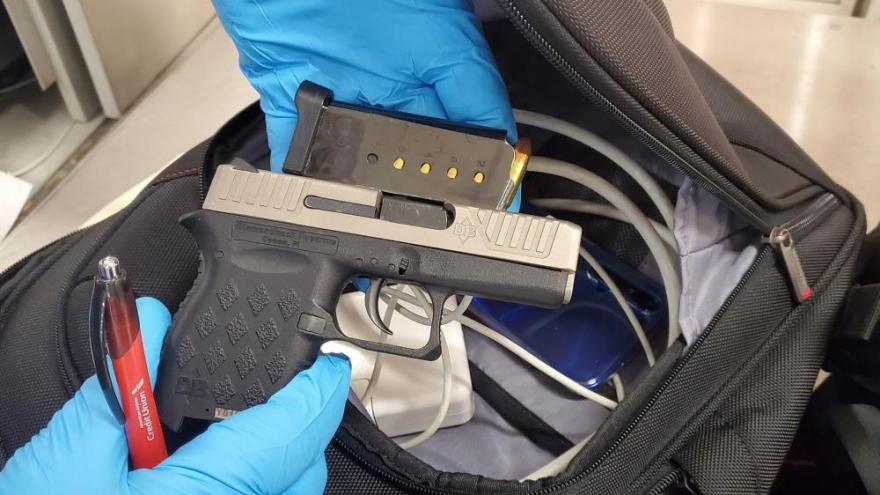 Airline passengers are bringing guns, like the one seen here in a carry-on bag at Philadelphia International Airport, to the airport in numbers never seen before, and it is a "huge problem," the Transportation Security Administration chief told CNN.

(CNN) -- Airline passengers are bringing guns to the airport in numbers never seen before, and it is a "huge problem," the Transportation Security Administration chief told CNN.

Security and law enforcement officials are at the same time dealing with an unprecedented surge in belligerent passengers who are straining the systems designed to keep air travel safe.

"We've had many more incidences where there are passenger disturbances both in checkpoints and onboard aircraft. That makes it more important that there are no guns involved," TSA Administrator David Pekoske said in an interview.

TSA reports catching 4,650 firearms at checkpoints in the first 10 months of the year -- a majority of which were loaded. That number surpasses the full-year record of 4,432, set in 2019.

And with 11 weeks left in the year -- including the busy Thanksgiving and Christmas travel seasons -- Pekoske says he thinks the number of confiscated weapons reflects an American population that is increasingly armed.

"I think more people are carrying weapons, just generally across the country, and then whatever is happening across the country we see reflected in our checkpoints," he said. "As a passenger, I don't want a another passenger flying with me with a gun in their possession."

"No checkpoint, no airport is immune from having passengers try to carry guns through the checkpoint," Pekoske said. "It does occur more frequently in again the states where gun carriage is at a higher rate compared to other states."

Firearm finds by TSA workers create an inconvenience for fliers during a time when more people are looking to travel again and as international travel restrictions are loosening. Gun discoveries slow checkpoint lines and trigger a local or airport police response. Airline officials, meanwhile, are asking airport police to be proactive about spotting intoxicated or otherwise agitated passengers who may spark an in-flight disturbance.

Those unruly passengers are also at previously unseen levels.

The Federal Aviation Administration said Tuesday that airline crews have reported 4,724 incidents this year, including 98 in the last week. It has opened more than 880 investigations; in a typical year, it conducts about 180 investigations.

The penalties for attempting to bring a firearm through a checkpoint start at about $2,500 for an unloaded weapon and range up to $10,000 for a loaded weapon. Penalties are higher for subsequent offenses, although Pekoske said they rarely see repeat offenders. The agency can also revoke PreCheck membership, local authorities may criminally prosecute, and in the Pittsburgh area, TSA says a sheriff's department has agreed to revoke concealed carry permits for individuals who try to bring a gun through a checkpoint.