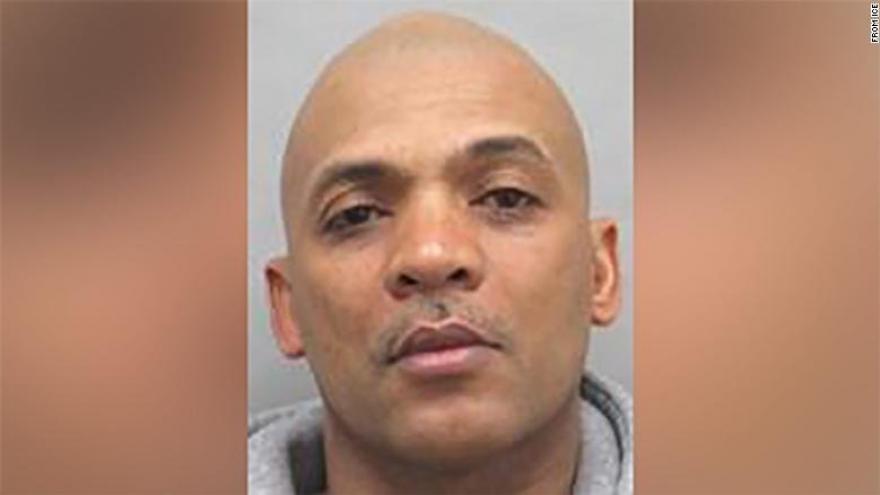 Darrick Bell, 50, was arrested at an Econo Lodge in Monroe, south of Detroit, with nearly $12,000 and suspected cocaine in his motel room, spokesman Khaalid Walls said in a statement. A female defendant facing drug charges was also arrested, he said. Bell, 50, had been on ICE\'s Most Wanted list for more than two years. Source: ICE
By Eric Levenson, CNN

(CNN) -- The suspected ringleader of a human trafficking and narcotics network who'd been on US Immigration and Customs Enforcement's Most Wanted list was arrested Wednesday night in Michigan after a manhunt that lasted more than two years, an agency spokesman said.

Darrick Bell, 50, was arrested at an Econo Lodge in Monroe, south of Detroit, with nearly $12,000 and suspected cocaine in his motel room, spokesman Khaalid Walls said in a statement. A female defendant facing drug charges was also arrested, he said.

Bell, a US citizen, is one of nine defendants charged with sex trafficking, conspiracy, and conspiracy to distribute drugs, among other charges, according to a superseding indictment filed in federal court. The indictment alleges that Bell and others conspired to give drugs to human trafficking victims to control and coerce them into commercial sex work.

Authorities had been looking for Bell since January 2017, when nearly 200 law enforcement personnel raided the Victory Inn in Detroit, a motel where Bell allegedly took part in a sophisticated criminal operation manned by lookouts and armed guards, Walls said. Bell escaped the raid.

It was not immediately clear if Bell has an attorney.

Bell first got the attention of Homeland Security Investigations in September 2016, when an alleged victim escaped the motel, and agents later confirmed he was operating out of the Victory Inn, according to ICE. Detroit Police that year noted more than 115 calls to the location for shootings, aggravated assaults and two homicides allegedly linked to former motel guests, ICE said.

The Victory Inn was ordered to be shuttered the following March by a Wayne County judge who found its owners ignored criminal activity there, according to ICE and CNN affiliate WXYZ. The motel reportedly was later torn down.

Bell, who also went by "Tone" or "Ghost," was considered armed and dangerous, ICE said. He was added to the Most Wanted list two years ago.

"By adding Tone to the HSI Most Wanted List, we make the world a much smaller place for him to hide," Steve Francis, then the ICE investigation unit's acting special agent in charge in Detroit, said at the time.

"We're confident that Tone's capture will empower the survivors of his alleged acts, and embolden others who are facing similar circumstances to come forward, knowing that they will be fully supported and that their captors will face justice."