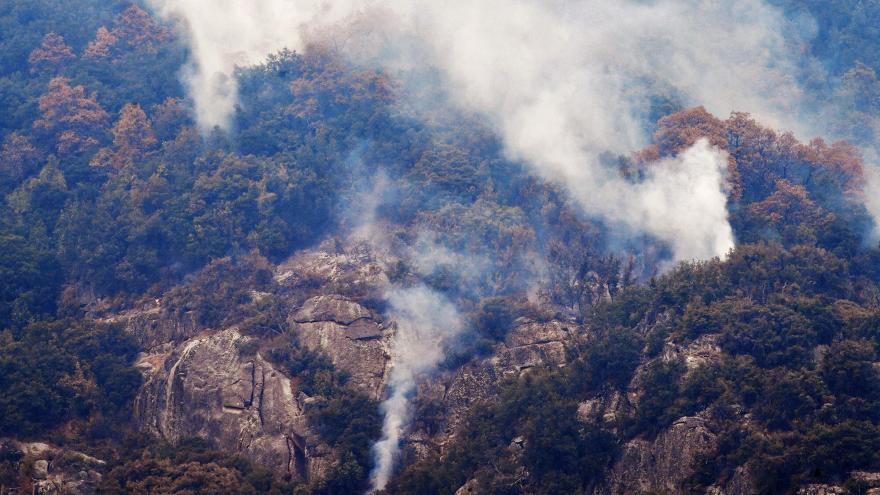 The KNP Complex Fire has destroyed many of California's iconic sequoia trees and is only 11% contained, according to the National Park Service.

(CNN) -- The KNP Complex Fire has destroyed many of California's iconic sequoia trees and is only 11% contained, according to the National Park Service.

On October 4, the high-intensity fire pushed north and caused damage to Redwood Canyon, the National Park Service told CNN in a statement. The fire now covers over 85,000 acres.

Currently, the exact number of burned trees is unknown because the fire is mostly uncontained, but the NPS said it has been a significant number -- in the hundreds.

Sparked by lightning in September, the KNP Complex Fire is the latest in a series of wildfires gobbling up the behemoth trees, among the largest in the world. The Windy Fire, also burning in Sequoia National Park, has killed at least 29 giant sequoias, and last year, the Castle Fire destroyed between 7500 and 10,600 of the trees, representing approximately 10-14% of the world's sequoia population.

Last month, crews wrapped the base of the General Sherman Tree, the world's largest tree, in aluminum-based burn-resistant material, according to Sequoia and Kings National Parks, to keep it safe from the flames.

The tree is 275 feet tall, and over 36 feet in diameter at the base, making it taller than the Statue of Liberty from its base to the torch.

The service plans on fully assessing the damage to the trees once the fire is "out cold," sometime in 2022.

Currently, 2,069 personnel are working to extinguish the flames, the NPS said, and in more rugged, inaccessible terrain, crews are dropping fire retardant gel by helicopter on the groves, but the smoke has made this difficult to do.

Four firefighters were injured Thursday and flown to the hospital after being struck by a falling tree, according to fire officials. One works for CalFire, while the other three are members of the California Conservation Corps, the release said.

They were released from the hospital Friday.

Even though the fire is intense, Sam Hodder, president and CEO of Save the Redwoods League, explained that fire is not the enemy of the giant sequoias, pointing out that these trees have lived through numerous wildfires and generally respond well to fires of moderate intensity.

Just a few months after the Castle Fire last year, a carpet of baby giant sequoias shot up from the earth where the devastating fire had occurred.

And even though giant sequoias adapt to periodic fire, the bark usually protects the trees against significant damage and can insulate them against a fire's heat, NPS said. Over time, however, it may be difficult for the trees to heal after centuries of fire scars.