Hundreds of roads under water as historic flooding breaches levees 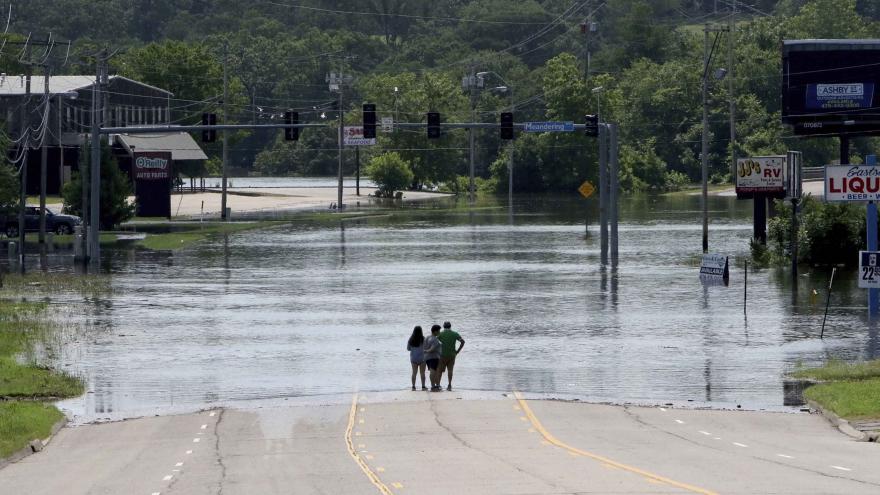 People stand in the middle of the street and look out over the flooded Massard Creek in Arkansas. Source: Jamie Mitchell/AP
By Madeline Holcombe and Joe Sutton, CNN

(CNN) -- Heavy rains in the Midwest are causing levees to breach along the Mississippi and Arkansas rivers, which may eventually put thousands of homes in danger.

The Dardanelle Levee along the Arkansas River breached early Friday near the community of Holla Bend, sending water gushing into farmland that already had been saturated by leaks in the levee a day earlier, video from CNN affiliate KARK shows.

About 75 homes around Holla Bend, just downriver from the city of Dardanelle, have so far been impacted by flooding in a three-mile area, Yell County Emergency Management Director Jeff Gilkey said Friday. Yell County Judge Mark Thone told CNN affiliate KATV that he urged everyone in the area to evacuate immediately.

The rushing water is expected to spread to Smiley Bayou, an area of about 500 people. Because the terrain is hilly, only an unspecified number of people in low-lying areas are expected to evacuate, Gilkey said.

Just upriver, Dardanelle -- a city of about 4,700 people -- was preparing for flood waters eventually to encroach "from the bayou side," Mayor Jimmy Witt wrote Friday morning on Facebook.

"I ask you to please not panic, we have time to prepare for this," Witt wrote in the Facebook post.

The Arkansas River at Dardanelle was nearly 2 feet above its record crest before the breach.

If more levees along the swollen Arkansas River breach, many more could be in the path of flooding.

The biggest concern is in the unprecedented pressure the flooding has put on the levees: They have never held back this much water for this long, the Arkansas Department of Emergency Management said Wednesday

Flooding could affect thousands of homes in 14 counties near the river, ranging from minor damage to destruction, Daniel said. Two levees -- one of them in Logan County along state Highway 309 -- have overtopped so far, but none has failed, Daniel said.

"This is looking to be record-breaking all along the Arkansas River, and this is something we have never seen before," she said.

Gov. Asa Hutchinson sent a letter to President Donald Trump requesting that he declare a state of emergency for 15 counties in the state, but that number is expected to increase.

Arkansas isn't the only state worried about the overflow of its rivers and levees. States along the Mississippi are experiencing their own threats from the rising water levels. In fact, 80 flood gauges running through 10 different states -- from North Dakota to Louisiana-- are indicating major flooding, the highest category.

A levee failure on the Mississippi River has caused a mandatory evacuation of residents in West Quincy, Missouri, the Marion County Sheriff's Office told CNN.

And according to the Missouri Department of Transportation, more than 300 roads are under water, with the potential for more to come.

The Mississippi River in St. Louis is expected to crest next Tuesday around 46 feet -- the second-highest level on record behind the 1993 floods. It would also be the second Top 7 crest of all time just this year -- with the previous being 41.7 feet on May 6.

Some of the high water has come from heavy rains: CNN Meteorologist Brandon Miller says portions of northern Oklahoma through central Kansas have seen 15-20 inches of rain during the month of May, which is 300 to 400% of the normal amount.

There's a brief break in the rain this weekend, but heavy rain is forecast for parts of Oklahoma and Kansas, with another 4-6 inches possible next week.

The Army Corps of Engineers' New Orleans district announced that while it will be later than expected, they plan to operate the Morganza Floodway on June 9.

The floodway is designed for emergency flooding and when operated, diverts excess floodwater from the Mississippi River to the Atchafalaya Basin, according to the Army Corps of Engineers.

The operation of the floodway itself can cause damage to properties surrounding it, the department said.